« Can Britain Farm Itself?
(Almost) everything you could want to know about the 2012 Transition Network conference »

Welcoming the 2012 Transition Network conference to Battersea Arts Centre: an interview with David Micklem of BAC 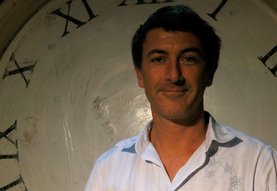 So David, Transition Network held its conference in Battersea in 2009.  I wonder if you could  give us a sense of any sort of lasting impact that that conference had on the organisation?

We hosted the conference in May 2009 and for us it was at a moment where some of the thinking we had been doing around what we might so as an arts organisation that’s interested in ‘the future’ – our mission is to invent the future of theatre, and so everything that we’re doing is really thinking about what a future might be for the Battersea and more broadly for the artists and audiences who use this building.  It felt like the Transition Network conference came to Battersea at a critical moment when we were I think struggling to work our way through a huge amount of information about how the planet would be changing, about how our lives might be changing, notions of peak oil. 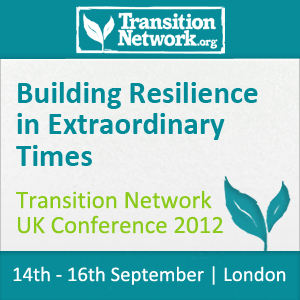 I suppose for us the conference landed at that perfect tipping point when we were trying to find a way through and Transition I suppose as a movement gave us some real grounding and a clear route through for us to think ultimately about how we might as an organisation reduce our reliance on energy, reduce our carbon emissions, and as we were just discussing, how we might become a better example of a 21st century organisation working out of a 19th Century building.

You mentioned before that the concept of an Energy Descent Action Plan is something that BAC as a result of the Conference has picked up and taken on with some enthusiasm. Can you tell us a bit about that?

Yeah, I think one of the challenges that we felt pre-2009 is that we were being told dozens of different things by dozens of different people and David and myself and other members of staff had attended conferences and meetings and convocations all around climate change and peak oil and futurology and I think we were stuck – we didn’t know quite what the best thing to do next was. Was the best next thing to lag the loft or was the best next thing to stop flying or was the best next thing to source our power from renewables?  I think what the Energy Descent Action Plan gave us was a very clear framework for making key decisions about what the next best thing to do was. I suppose in a world where there’s already always a hundred things on your to do list, Transition, the Transition Network and the Energy Descent Action Plan helped us focus on what the five most important things to do might be. 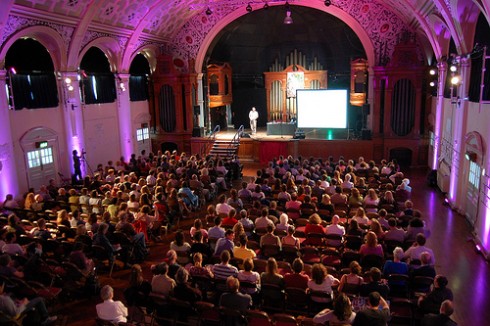 When I visited you a while ago you mentioned the idea that one thing you were exploring as a concept was the idea of the Battersea as the ‘Transition Town Hall’ for Battersea. How do you see that might unfold, or what are the discussions around that?

I hope this answers your question or goes some way towards answering your question. This building I’m currently sitting in with a rather echoey room has always been at the centre of this community so since it was built in 1893 as a Town Hall right through until it stopped being a Town Hall in the 1960s and then from the 1980s onwards as an arts centre.  It has always been a focal point for this part of southwest London. It’s a place where people have gone to seek help with medical treatments (when there was a nurse living in the building), or it’s a place where people have gone to celebrate or commiserate or to debate, it’s a place where people have more recently come to pursue radical ideas about what art might be in the 21st Century or what theatre might be or how we might live better together. 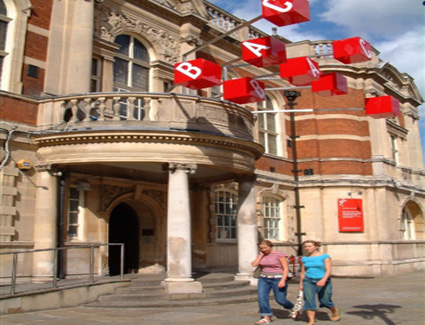 I suppose having been inspired by seeing particularly Transition Town Tooting just down the road from us and the great impact of a small but very dedicated group of people and how those people can really impact on lives across that part of London we began to think about what role we might play as a physical space for people in this part of London again as an exemplar of a new way of thinking, and a new way of moving towards a positive future which I think people are increasingly attracted towards.

You know the riots of August last year were literally outside our front door. There are increasing numbers of young people and older people and people of all ages and social backgrounds who are feeling disgruntled, disempowered, without a voice.  I think for us the idea of Transition is about re-engaging people in the things that matter, re-establishing a sense of community and I think that that is one of our ambitions. We talk a lot here about trying to reclaim two words that you know, in a lot of circles feel quite redundant, but the notion  of ‘the community centre’ which I think for most people now feels like a rather 1970s quaint idea, I think we want to re-boot the notion of the community centre as  being something that’s really a significant part of 21st Century society, and theatre too which for a lot of people means sitting in the dark and not being fiddled with and a rather archaic form of storytelling.

We want to reboot that too and re-energise that and make that feel absolutely central to civic life. I suppose the notion of the Transition Town Hall feels like a way in which we might do that in a more profound way, in a way that grasps more attention from people who live around here but also people who live in other parts of the country for whom this notion of the Transition Town Hall might be a really exciting prospect.

We’re back with you again this September. The theme of the conference this year is ‘Building resilience in extraordinary times’. What are your hopes for this year’s event?

I have high hopes from a number of different perspectives. High hopes from an organisational point of view in that the fairy dust of the last Transition conference in May 2009 is still scattered across the building and certainly a number of the staff members who were engaged in that conference I think have become powerful voices within the organisation, champions within the organisation for thinking differently about how we operate.

But I suppose I’m also interested in the arts community more generally across London and across the UK and there is a wide recognition certainly amongst that community that arts can change life and art can have a powerful impact on enabling people to think differently about the world and many of the values of arts organisations across the UK feel like they connect to the values of the Transition movement and I suppose we’re keen to align ourselves with Transition and I suppose through the conference perhaps get other organisations to think about how they might become a Transition organisation or how they might catalyse a Transition movement within the context within which they’re working.

I suppose that’s another ambition, is that we –perhaps better than we did in 2009 – we better connect those two sides of the worlds in which we work, Transition and the arts and culture, and find better points of connection so those two aspects feel more seamlessly integrated. I suppose if there’s a third thing it’s always wonderful to host and welcome new people into the building and certainly my recollection of May 2009 was that we welcomed 400 plus people from all across the UK to BAC to have a, I hope, quite transformational experience and I’m sure many of those people will be returning in 2012 but I’m sure there’ll be a lot of new people who’ll be coming here too.

As you know Rob, from your time here, we’re always a building that’s welcomed people from all walks of life. It’s what we do well, we think the notion of welcome is very central to our way of working, to bringing people to an arts environment, but also as I said earlier this has always been a place that has welcomed, invited, encouraged radical thought and new ideas.  Whether that was London’s first black mayor John Archer in the 1930s or it was Emmeline Pankhurst who spoke in the grand hall in the 1920s or its people who might be coming together in 2012 to talk about Transition. This is always a building that’s encouraged radical new thought and bringing people together so high expectations of 350 plus new voices being heard in and around the building and the seeds of new ideas being born in this rather wonderful place that’s always encouraged experiment and innovation and new thinking.