Can Britain Farm Itself? 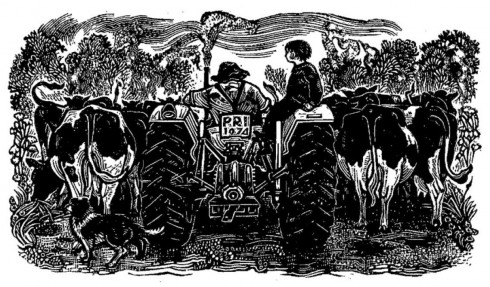 In 2007 we published Simon Fairlie’s seminal study “Can Britain Feed Itself?” (which originally appeared in The Land journal), the first study since 1975 to ask that question.  In spite of being a back of the envelope stab at the question, the study proved hugely provocative (although sadly not in government circles) resulting in a number of “Can [insert name of place] feed itself” studies and seemingly endless debates about whether it could be done in a way that pleased vegans, meat eaters, vegetarians and so on.  Five years later, The Land, the journal that published Fairlie’s original study, has published “Can Britain Farm Itself?” (which you can download as a pdf here or read online here), written by Ed Hamer, smallholder and writer (a noble combination).  The question it explores is the extent to which agriculture, if approached in a different way, could create land-based employment in a time in desperate need of employment opportunities.  It is a fascinating piece of work.

One of its key conclusions is that “cutting exports and replacing imports with domestic production would result in a, not insignificant, increase of 66,315 full time equivalents in the farming sector”.  This picks up on Vicki Hurd’s quote which appears in the report:

“That the UK could be entirely self sufficient in all products is not being suggested. Yet when it is not even self sufficient in produce suitable to its climate and soil, and when considerable social and environmental problems arise from the current production and importation, there should be a significant shift in policy towards promoting production and consumption of home grown produce”.

Like “Can Britain Feed Itself?”, it acknowledges that it is a back-of -an-envelope study designed to stimulate debate and discussion (given that the article at The Land’s website has no comments section, feel welcome to have that discussion and debate below (the editors have said they will follow what happens with interest).  I find it really heartening that the localisation movement is now starting to build (through studies like this, the forthcoming  Economic Blueprints for Totnes, Hereford and Manchester, and other similar things underway) an economic case for localisation and resilience.

The paper mentions that “Farmers’ Weekly reported in May 2012 on the unveiling of John Deere’s first driverless tractor which can plough, seed and harvest a 1,000 acre field if you want it to – controlled entirely by a GPS computer”.  “Can Britain Farm Itself?” is essential reading for those who feel that we need a vibrant, diverse, resilient rural economy that creates meaningful work for people, rather than a people-free automated industrial farming system.

Not only would is it a brilliant step to getting more people bac into employment, it would have a positive impact on the countryside. In times like these the needs of the many far outway the wants and needs if the few. Hikers and country retirees let the farmers have the land back and watch our countryside come alive.
Here’s to nation self-suficiancy.

The depopulation of the coutryside has led to a reliance on automation, technology and red diesel over people. This is a major cause of unhappiness and stress in the farming community (a treadmill of required capital investment & chasing increasing yields – at the expense of sustainability & profit margins) and a lack of understanding of where food comes from in the general population. If people are helped back onto the land for community food production it can only be good for the individual and society in general.

This report for the Soil Association (which as a co-author I ought to declare an interest in) shows just how significant the impact of community food production is and could be:

Yes, we should be self sufficent in all food that our climate can grow. I read on the Internet several years ago that until the first world war, the UK was largely self sufficent in food and fuel. Transport was predominantly still by horse and we still had plenty of coal. I have searched for the details but failed, perhaps a reader might be able to correct my sketchy memory that goes a bit like this. In 1900 85% of the UK land mass was used for agriculture yet 70% was used to support the horse population. We grew flax to make linen and for oil and hemp for ropes, sails etc. No need to import cotton.

Then because labour was cheaper further afield and oil was discovered, we began importing stuff and using oil based materials. Horses were abandoned in favour of petrol powered vehicles. All that land that had supported the horses became redundant.

We’ve learnt about the damage using fossil fuels has done to the environment and climate yet there are now opportunities to develop new technologies to run vehicles on wood gas and heat home with gasifier wood burners, creating biochar as we do and if applied to the land improving the soil while trapping carbon there for centuries without expensive and inefficeint technologies for ‘sequestering’ CO2 and burying it.

A self sufficient society growing its own food, improving soil condition and water retention would feed us, warm us and give us better air without warming the planet.

The prospect of agri business taking over our countryside is a shocking one. More posts on this subject please! (And lovely drawings – where from?)

I am a farmer and we really do need to return to our roots and stop exporting all our valuable crops that farmers NEED; like hay to China. Our hay prices went from 7.75/bale to 22.00 in a year BECAUSE the tankers that used to return to China empty, now are filled with our hay for their livestock. Dairy’s rely HEAVILY on high quality alfalfa and so do any other farmers. The loss of our hay crops to China is one of the things that has effected even hobby farmers. People are abandoning their animals because no one can afford feed. It is devastating to our rural economy.

This is exactly why I have chucked in my previous career and started farming. After 5 years of learning and converting, we now have an organic farm that is entirely powered by renewable energy – from pumping water to deliveries of our produce to our customers. Our approach incorporates the use of old variates of plants, using older machinery which is purely mechanical and which is therefore capable of being maintained by our local mechanics. At the same time we are finding that we are able to produce food at below conventional (i.e. chemical) prices. Organic farm, using native breeds and deep rooted perennial plant species, utilising purely mechanical (no electronics) machinery, all energy supplied from renewables, incl transport energy can produce plenty of food at lower cost. Even more so as energy prices go higher. If widely adopted, conventional farming could well be displaced.

Hi having just completed a course at the RAC i find that farmers are not farmers but merely rich inheritants of land, i hope this is only true of the Gloucestershire area. My understanding from the topics we covered show that they are only willing to buy more machinery and use more fossil fuels in the goal to earn more money by doing less – They know very little about the soil and so all remedies to production are chemical based – its a sad discovery and to think its all backed up by government incentives that just keep feeding their hungry pockets. However, i am hopeful for the UK’s success at being self sufficient but government and its economic building blocks are hard nuts to crack. We may succeed on a local level but getting the large land owners to convert will be a battle.

Excellent article, I do wonder how climate change will affect agricultural areas like East Anglia and how that will affect our production. Personally I am in favour of more community farms, using permaculture methods. We could also improve our forest cover and reskill in some of the traditional woodland skills. There is also the concern about how reliant on fossil fuel modern agricultural methods are. But getting more people growing food and reconnecting with the land is a very good idea.

Planning restrictions are a big barrier to the expansion of smallholding. Wales has a ‘One Planet’ policy which makes new ‘self sufficiency plus’ initiatives a possibility.