« From Venice to Ferrara, to be greeted by a brass band!
Dave Chapman’s ‘No-Nonsense Guide to Localism’ »

Final day in Italy: From Ferrara to Parma, to speak about the ‘Sweet Revolution’ of Transition 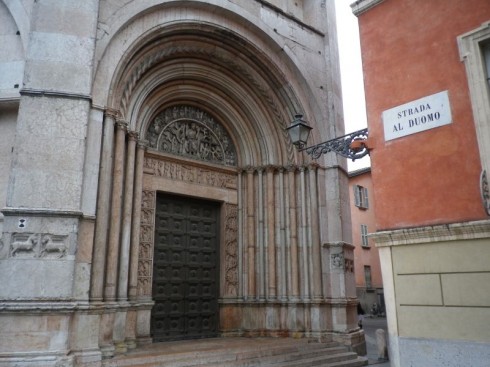 Beautiful ancient carved doors on the Battistero in Parma.

The next day began with a walk around the city of Ferrara.  The core of the city is medieval, and contains some beautiful architecture.  One of the things that is initially most striking about Ferrara is the number of bicycles, and the diversity of the people riding bicycles.  Ferrara is famous for the levels of cycling.  This is aided by the fact that it is a very flat city, but as Pierre told me, also by the fact that cyclists are treated, as he put it, “like sacred cows are in India”, that is, drivers expect them to go anywhere, and do anything, at any time, and so afford them to necessary space on the road.  There are no formal cycle lanes so far as I could see, but somehow it all works. 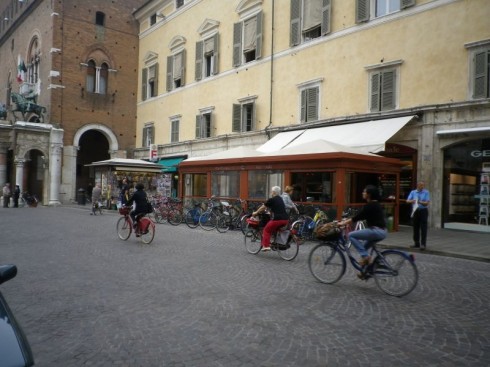 Another thing that was striking was that Pierre said that after the financial crisis in Italy began, the number of bicycles began to increase sharply, and what was happening was that people were pulling old, abandoned, neglected bicycles out of sheds, dusting them off, doing them up, and using them again.  Riding around Ferrara were types and makes of bikes that I hadn’t seen for many years.  Have a look at some of these for example: 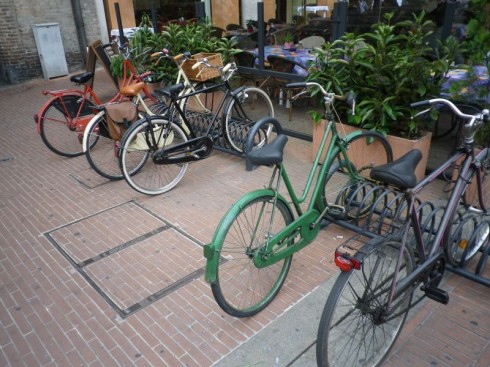 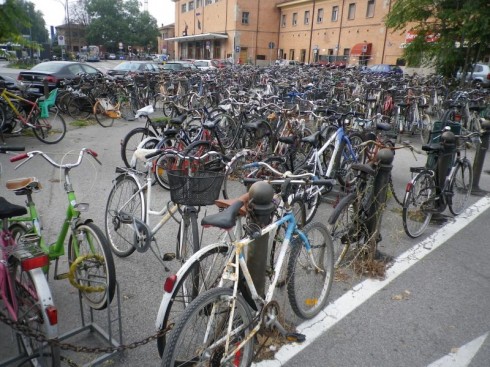 It was great to see young people, very old people, and everyone in between, sailing past on two wheels.  First place we visited was Teatro Comunale di Ferrara,  the theatre where Pierre works, which is a very busy, and active, community theatre in the heart of the city, built around 200 years ago.  Here’s the view from the stage, which had been graced the previous night by a musical impresario, as a result of which the stage was still covered in the flowers that had been thrown at him at the end of his performance.  An amazing building. 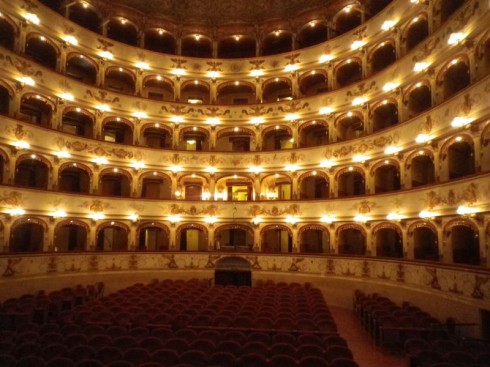 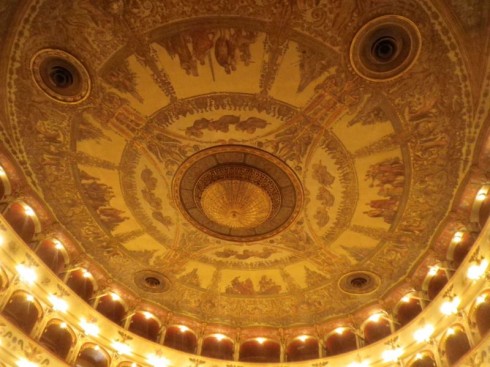 … and here is its incredible, and very old, ceiling.

Then we walked past the huge Castello in the middle of the city, and the Cathedral, beautiful.  Here they are: 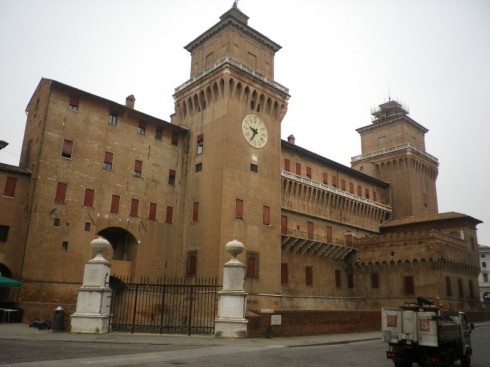 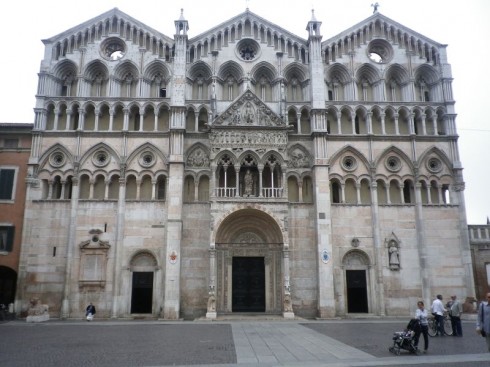 Then off to get the train to Parma.  I was due to speak at an event organised by Kuminda, a network of organisations which promotes food security, social justice and food sustainability.  They are running a month-long festival in October under the title “Il diritto al cibo” (“the right to food”), and I was the kind of warm-up act for that.

We were met at the station by some of the good people of Kuminda (but no brass band) and went for lunch in a small restaurant.  I had one of the dishes that is particular to this region of Italy, Tortelli, which are like square ravioli parcels, some containing spinach and ricotta and some containing pumpkin.  One of the people in the group said “this is the finest dish in the world”, and he wasn’t far wrong.

We had some time to visit some of the sights of Parma, in particular the Duomo, the biggest cathedral in Parma.  What a stunning place.  It contains frescos painted by students of Giotto and some amazing iconography and wall art.  Here’s some… 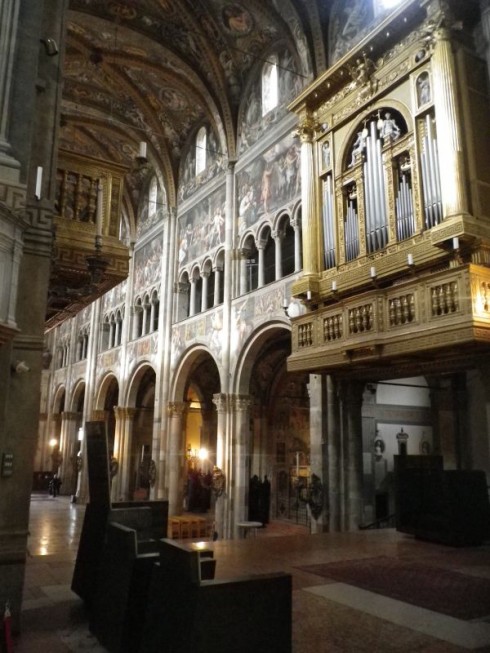 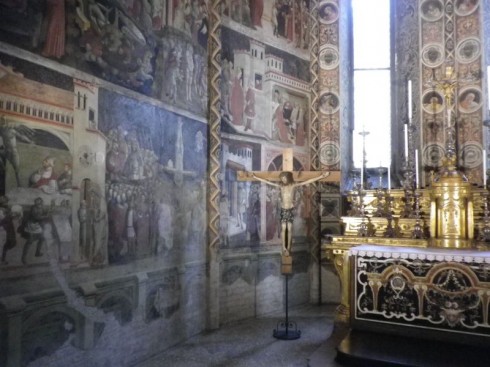 … and most striking of all is the interior of the dome itself, which in stunning perspective, of what I assume is the Ascension, of people making their way to Heaven.  Well worth the neck strain I’d say.  Anyway I took this photo to save you the neck ache. 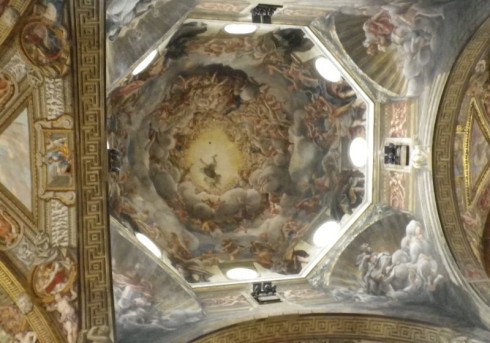 Then off to Biblioteca Antica San Giovanni Evangelista, with its beautiful covered cloisters, a really old well, and upstairs, a huge room with the most amazing ceiling painted hundreds of years ago, frescos with maps of Italy, of Parma and of famous sea battles.  It was really quite extraordinary.  Before the talk I did an interview with a reporter, and then did some photos with a photographer from La Republicca, which you can see here. 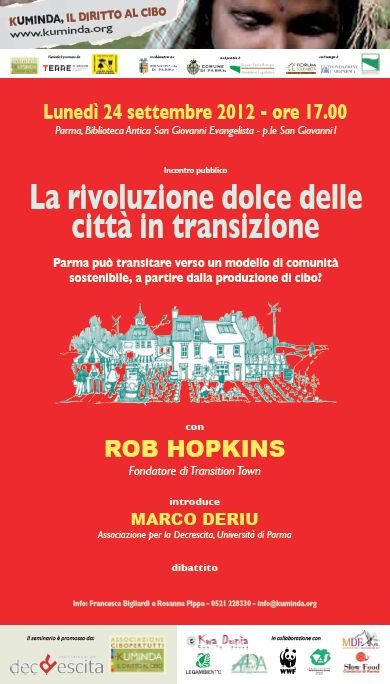 The organisers were amazed with the turnout (it had been in the local paper here).  The room was packed, more people standing than were able to find a seat.  Firstly I gave a talk outlining what Transition is, how it works, and how it might look in the context of Parma:

… and then, after I had asked people to talk to each other in pairs for a few minutes, I spoke specifically about food (the theme of the October series of events), and in particular about the work Transition Town Totnes is doing around food:

There was a great buzz in the room, people were really receptive.  Afterwards I went with the organisers for supper, to a local trattoria, where we ate delicious food, some of it specific to Parma (including the local Lambrusco, very nice) and also the Sicilia, where the chef comes from.

Then it was off the station, off to Milano Centrale, onto the night train to Paris in the top (and therefore the hottest) couchette.  It’s been a fantastic few days.  Peoples’ hospitality has been amazing.  It is wonderful to visit Transition initiatives and to get a taste of impact Transition has been quietly having in communities around the world.  To meet some of the incredible people who have felt called to pick this idea and to try and make it happens, as well as to hear some of the challenges they are experiencing.  It was great to speak Italian again too.  So I’m home, tired but inspired, touched, a few pounds heavier, but deeply thankful to everyone who made this adventure possible.  Thanks all.  Grazie a tutti.

It would be interesting to see if the uptake of cycling as the economy becomes shaky is happening in other places, and if/how cycling could be stimulated when those times become widely seen.

Woah, seriously gorgeous places. Welcome back to Blighty. I wish I’d made an effort to get to Ferrara when I was in Ravenna. It sounds a bit like a working holiday for you. You should have told us when you were coming back so we could have been ready and waiting for you at Kings Cross – a kazoo ensemble, perhaps 🙂
As for the cycling, I think it’s a “needs must” thing. And an opportunity for bike mechanics to get all those old bikes roadworthy. Do you remember the heavy old Chinese bikes featured in The Power of Community? A bit like the heavyweight but pink bike that someone’s just given me, a gift ‘from the universe’…

Thanks Jo. Yes, the kazoo ensemble sounds like just the kind of thing… enjoy the bike.

Sounds Jo as though you have been given what is called a BSO – a bicycle shaped object, rather than an actual bike! The downside of that sort of machine is that will tend to confirm the impression of non-cyclists that cycling is not something that can be enjoyed. For many any bicycle is a bicycle. When you have the right bike for the kind of riding you are doing it is such a joy. For the record I have 5 bikes 😉

Don’t get me wrong. I LOVE my bike, it’s perfect for the little distances I travel, sometimes lugging along a trailer, sometimes conveying Sally-on-tiger-cushion, balanced on the cross bar. It’s like an old Nokia compared to the latest iPhone5. It does the job and I am very grateful to the universe.
This is a hilarious video of someone queing for an iPhone5 apparently for no other reason than it looks nice. http://youtu.be/BMsLArefSOw My favourite bit:
Interviewer “It has a camera I heard.”
Woman “I guess so, I’ve never owned anything like that in my entire life, so we’ll see.”
Interviewer “It’ll take still pictures of moving images”
Woman “That’s even better!”.
Sorry, I am avoiding doing actual work.

she’s being paid by someone to queue for them

I am the Italian woman you met at the TT conference at BAC in London, maybe you will remember…
I enjoyed your Italian pictures, to be honest I have never been to those places!
I have been to Venice on Sunday, the day you took the boat to Ferrara. Elen asked me to join her and you on this trip, but I thought I was busy on that day (compost lesson in Slovenia…). This lesson was moved eventually, and I decided to come to Venice on Saturday late in the night…
So I was there buy you and Elen had already left.
I could see just few things, because it was almost finished, but I would like to know your impression.
It seemed to me that the participants expected to get more answers, a more cn-do attitude after many talks by eminent philosophers and academics. This is what I appreciated in Wales at the permaculture convergence and in London at the TT conference: talks, but also practical workshops.

Hi Rob! Thank you very much for visiting us in Ferrara, it’s been a pleasure to know and to talk with you! Hope you come back soon!

Thanks Francesca, it was great to meet you and to be part of such a magical evening!