« Day four at the Degrowth conference in Venice: “Democracy without confidence is nothing”
Final day in Italy: From Ferrara to Parma, to speak about the ‘Sweet Revolution’ of Transition »

From Venice to Ferrara, to be greeted by a brass band! 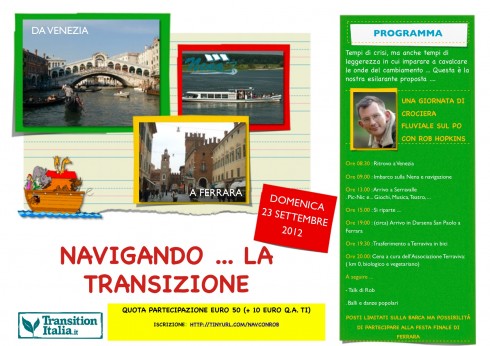 Sunday began early, going to meet around 25 members of Transition Italia and of different Italian groups on the harbourside on the outskirts of Venice.  There we got on a boat that they had booked to take us all to Ferrara.  The boat was called ‘Nena’, an original Venezian ‘vaporetto’, the boats particular to Venice that are used to ferry passengers and goods around the smaller waterways.  It was owned by a family who had lovingly restored it and it was a beautiful boat, and they were our hosts for the day.  It was to turn out to be one of the most beautiful Transition-related days I have ever had the fortune to experience.

Once we were on the boat, we all introduced ourselves, and then spent the next 8 hours or so chatting, eating, sharing stories and enjoying beautiful, but rather neglected parts of the country. 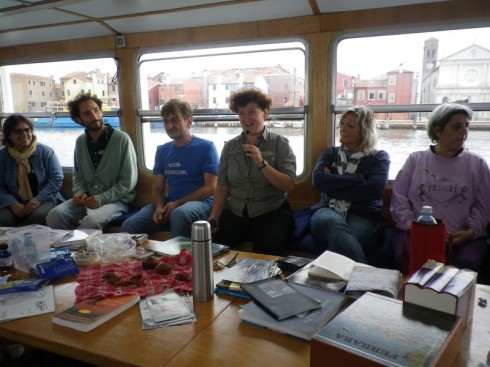 First we headed out of Venice, seeing its various islands and amazing buildings get smaller and smaller as we headed out into the water.  This gave, much more than time spent walking around the city, a real sense how just how vulnerable this jewel of a city is to sea level rise.  As it is, during the winter the city will often flood to the depth of around a metre, which is why the ground floors of many buildings are left empty, and why there is no plaster often on the lower parts of the buildings. 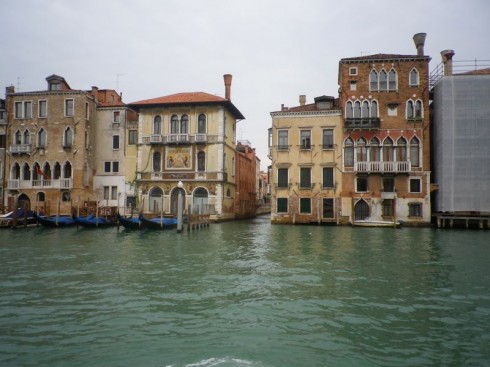 Sailing away from Venice, and seeing it sat there as small islands just above the water, gave an impression of its vulnerability that was very striking. 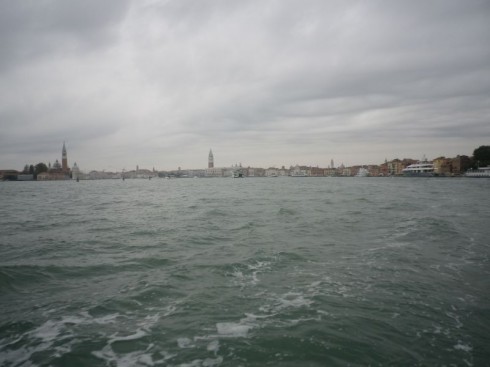 Then we travelled for a while before we came to the River Po.  The Po is the longest river in Italy, running from its source in the Cottonian Alps to the Adriatic Sea.  At its widest point it is 503m metres wide.  It passes through Turin, Piacenza and Ferrara, and can also be used to access Milan, using a series of complex channels called ‘navagli’ with Leonardo da Vinci designed (thank you Wikipedia). 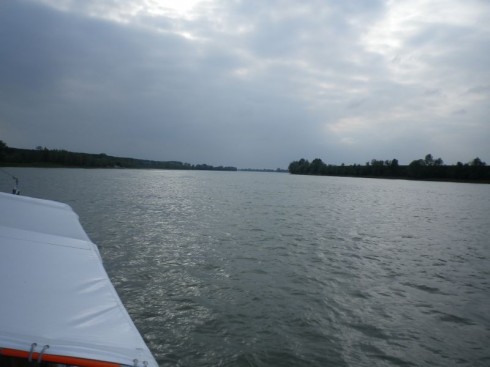 The Po is a river much celebrated in Italian culture, such as in Riccardo Bacchelli’s classic trilogy of books ‘The Mill on the Po’, and historically it was very important as a commercial waterway, but now, with most goods in the country delivered by road, it no longer serves much practical function.  It isn’t even visited by tourists much either.  That’s a shame, as it is a beautiful, and very wide, stretch of river.

We travelled down the Po, stopped for a walk in one place, and were told the story of an island where in the 1950s, a group of intellectuals declared that the island was an independent Republic, and issued their own passport, their own currency and so on.  Apparently this happened quite a lot at the time, and the owner of the boat showed us a magazine article that also contained pictures of their currency (see below). 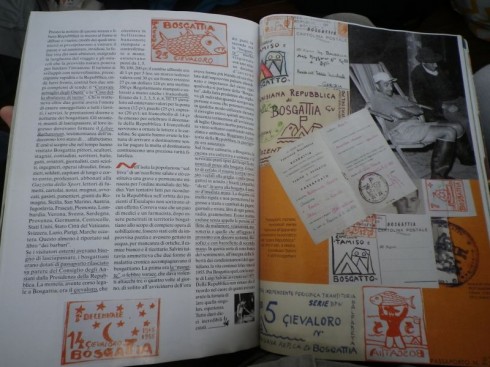 After a while we turned into the canal that led to Ferrara, which required passing through several locks. 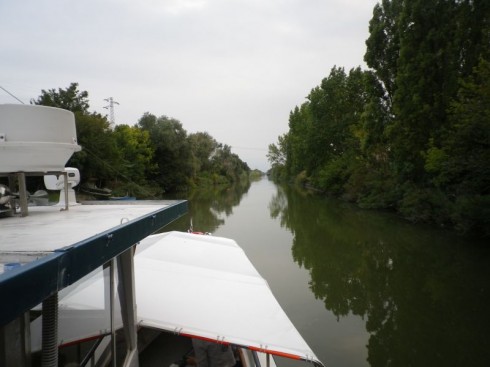 Along the canal was the remains of what used to be a very active chemical industry in the city, much of which has since closed down.  People on the boat talked about how polluted it had been when the industry was in full swing, although some small parts of it are still working. 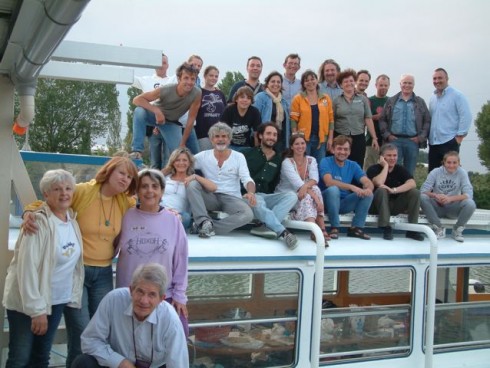 The group photo from the Transition Italia board trip

Then we came to Ferrara.  Ferrara in Transizione has been active for about 3 years, and they had organised the visit.  I have given many talks about Transition in many places, but never have I had a welcome like this!  This was the view as we arrived, lots of people waiting on the harbourside. 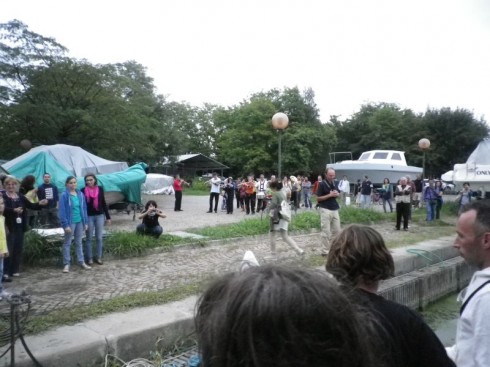 Then, as we got off the boat, a brass band started up!  Here they are….

Imagine.  I felt like Bill Clinton or something.  As Cristiano Bottone of Transition Monteveglio said as we stood watching the band (“comme la Regina” – “like the Queen”).  I met lots of people, and then we all walked, as a procession, to the venue for the evening’s event, with the band leading the way.  It was quite extraordinary.

When we arrived, there were about 150 people, and a huge spread of food that people had brought.  I met lots more lovely people, who were all delighted that I had come.  It was very touching actually.  Given that I don’t travel that much, it is amazing to go places and to see how much all this stuff really means to people, and how excited they are to meet me and hear the latest about Transition. 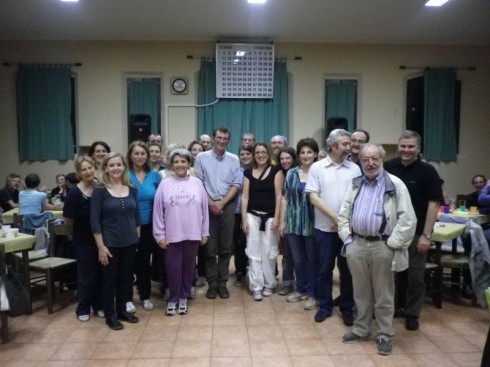 With members of Transition Bologna.

So we had some very delicious food, like a big community meal, and then Ellen Bermann of Transition Italia did a couple of silly warm-up activities.  Then Pierre Houben, one of the founders of Ferrara in Transizione, and my host for the night, ran a really wonderful exercise to reflect on the work of Ferrara in Transizione so far.  He had prepared a long piece of brightly coloured string, to which were attached photos from all the activities that the group had undertaken over the past 3 years, as well as a description of the event.  He began with 2010, passing the string out around the room, and it went around, and around, passing through everyone’s hands as it moved from 2010 to 2011, and from 2011 to 2012, and the projects just kept coming thicker and faster. 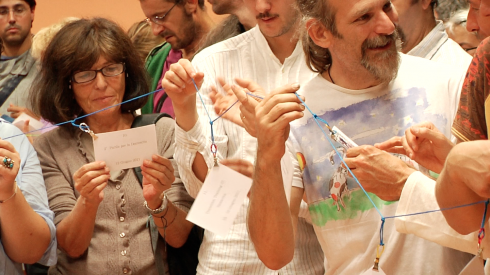 It was a very powerful exercise, both for those who had prepared it, and for those who lived in the city and perhaps had no idea of how much had been going on.  A very useful exercise that could be replicated elsewhere, especially for events that celebrate a Transition group’s anniversary or something.  Here are a few more photos of it: 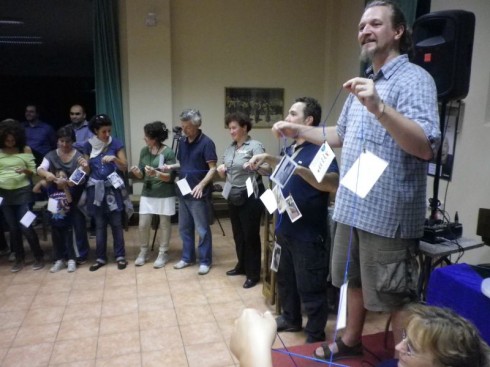 Pierre Houben (right) leading the ‘so what has Transition Ferrara done for the last 3 years?’ exercise. 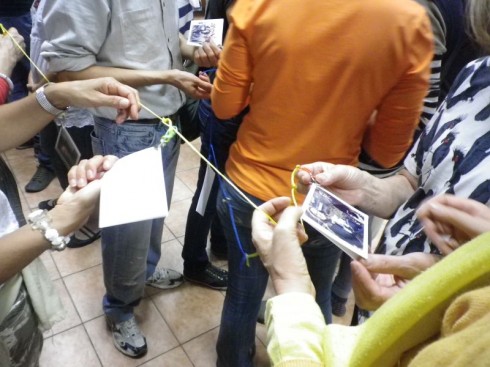 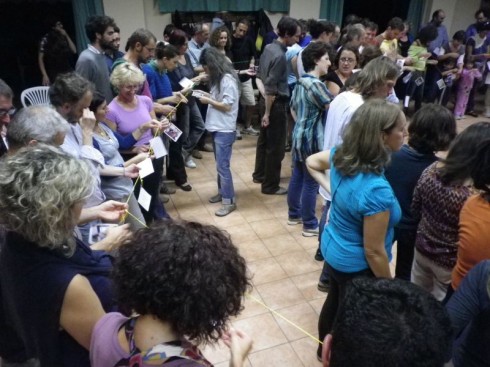 After this then I was asked to speak, and beautifully translated by Deborah Rim Moiso (whose translating services are available here), I talked about how honoured I was to visit Ferrara, and that it isn’t every day I am greeted by a brass band when I arrive somewhere! 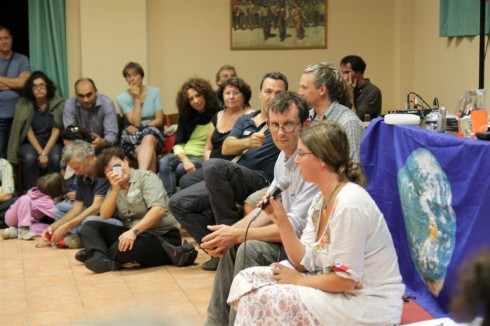 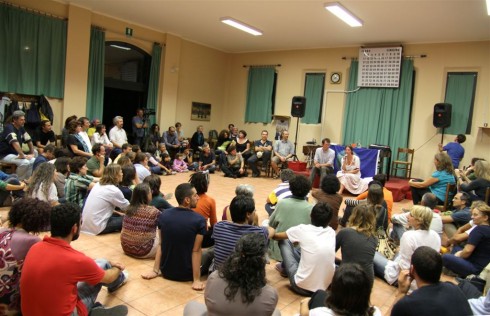 I recorded the talk, so here it is, complete with Italian translation:

After the talk, Ellen led a group song which was very powerful actually, and that was that.  Then there was a lot of meeting people, and there was a lot of love in the house, as they say, a lot of delight and smiling faces.  It will certainly remain with me for a long time as one of the most magical, the most deeply welcoming, the most beautiful events I have ever had the privilege to be a part of.  I am very grateful to everyone who was involved in making it happen.

Finally, it was off to Pierre’s and straight to sleep.

Here is the write-up of the event on Ferrara in Transizione’s website.

So well deserved Rob. When I attended my local Transition meeting last night (Change4Chanlfont) I reported that you seemed a wee bit tired in Venice. So glad that the brass band was there for a proper welcome and a fitting tribute for all you’ve done and inspired. BTW I’m presenting on Energy at a Sustainable Cities – Sustainable Development conference in the UAE next week and I’ve got several slides on transition.

Thanks Carmen. I think if I sounded tired in Venice it was because I was writing up those posts late at night after very full days. Good luck with the presentation!

Excellent story and thanks for the wonderful pictures that speak more than words can convey. I’m so glad that you are receiving the appreciation you deserve. Here Transition Woodinville will be starting a book group using the Transition Companion. It’s a good way to for us to be together and deepen our Transition roots.

Very moving Rob – even brought tears to my eyes listening to the band play in welcome to you!
You have started something which is inspiring so many people. Well done for taking so much of your valuable energy and time in transcribing your experiences and the talks you have attended for us.
Shame about your garden though, I admire you for sticking to your principals and not resorting to slug pellets this year – unlike me!