« A November Round-up of What’s Happening out in the World of Transition
Welcome back, and a vision for 2013 »

In the end I got to Brussels 2 hours late, hopped in a cab, edged through the rush hour traffic in the city, knowing that it was touch and go whether I would actually make it to the ceremony in time.  I texted a few finely crafted words that Filipa Pimentel, Transition Network’s national hubs co-ordinator and person in Brussels, could read if I didn’t make it on time, which in the event didn’t get to her.  This wasn’t going to plan. 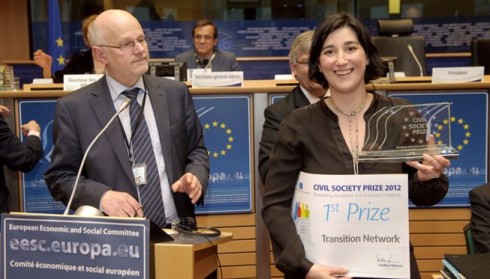 Filipa Pimentel accepts the EESC Award on behalf of Transition Network, whilst I dash sweatily down long EU corridors.

I arrived, dashed through security, through long corridors, only to find that I was 5 minutes late, and that Filipa had accepted the award in my place.  A film about Transition Network had been shown (the one at the start of this post), and then she had made my apologies and accepted the award.  Ah well.  The other two awards were then given out, and then there were lots of people offering their congratulations and handshakes and pats on the back.  So what is the European Economic and Social Committee Civil Society Prize?

The EESC themselves describe it thus:

“every year, the EESC’s Civil Society Prize turns the spotlight on organisations around Europe that are carrying out remarkable and innovative projects to promote society’s well-being and strengthen the voice of citizens in democratic decision-making”.

Transition Network came first, winning €15,000 and a rather fetching (and, as I had home on the train I must point out, rather heavy) trophy.  EESC President Steffan Nillson, one of the judges, said:

“The strong European dimension of Transition Network projects does justice to the overall objective of the prize, and the 2012 theme: ‘Innovate for a Sustainable Europe!”

“This prize is great recognition for the work of so many people in hundreds of European communities who are engaging their local civil society in developing low-carbon futures and livelihoods which promote well-being for all in the community”.

The award also explicitly recognised Transition Network’s REconomy Project and its work in supporting Transition initiatives in developing social enterprises.  14 people from initiatives in Belgium, Germany, Italy and Portugal came along to help celebrate, and after the ceremony was completed, we went for a drink and some rather fine Belgian dark beer. 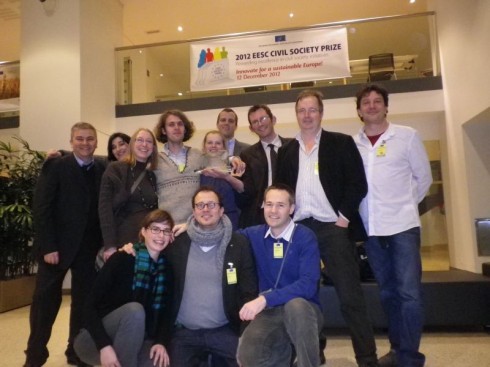 Various Transitioners from across Europe misbehaving disgracefully in the foyer of the European Commission en route to the evening reception.

In the evening there was a reception for the winners.  This time I got to say a few words, my stepping onto the stage being greeted by an Oscars-style fanfare which was rather disconcerting. 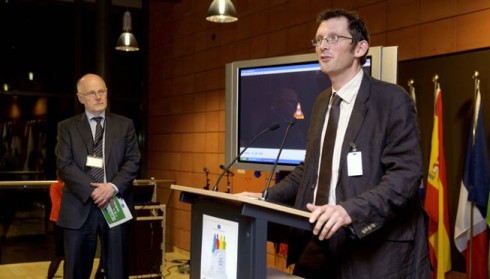 I talked about the opening scene of Woody Allen’s ‘Stardust Memories’ where he is stuck on the miserable train looking across at the party where the beautiful people are partying, and how trying to make change happen on these issues can feel like being stuck on the miserable train, but Transition shows what it can be like when modelled more on the happy carriage model (or something like that – you had to be there).  Thanks to Cristiano Bottone, here is a film of my talk: 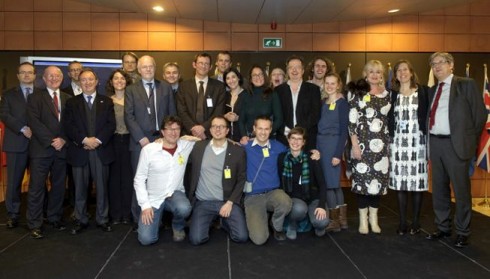 Then there was lots of photo-taking, handshaking and chatting to people.  There was good time to catch up with the Transition folks who had come, and the work they are up to, the opportunities opening up for them and the challenges they are facing.  And that was that really. 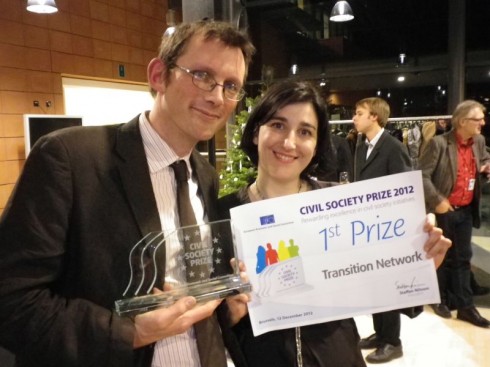 With Filipa, award, and tie.

The award is a great honour for Transition Network, and definitely raises the profile of the Transition idea, of the REconomy Project, and of the work of Transition groups across the continent.  I’d like to thank the judges for their recognition and for everyone else who voted for us and put us forward, and for my good Transition friends to came along to raise a glass and toast this amazing recognition of the work of so many people in so many places.

This was a great time together…
I’m proud to be part of this movement with all the transitioners around the world.

Rob, the fine Belgian dark beer was a trappist beer called “Orval” (You already tasted a “Chimay” last year in Brussels). So for your next coming to Belgium, I suggest you to taste one of these fine belgian trappist beers : “Rochefort”, Westmalle or Westvleteren.

Well done. I only dream of the day when a government in North America is enlightened enough to recognize the Transition initiative as a positive force in society.

Congrats from Surrey, BC (Canada), excellent work you are doing Rob, and all the transitioners…hope these things happen more often so transitions start getting more attention and the work we are trying to do reaches more people in need…cheers

Congratulations ! Well deserved! You folks have been inspiring to us living on the other side of our planet. We have been following you for a couple of years now. Amazing developments . Still trying to work hard from Singapore and Western Australia .

Congratulations to everyone involved in Transition in Europe and World Wide!. It’s a matter of time will set the way of doing things at a much bigger scale.
Well done!

Congrats to our transition friends, and keep the good job!

Seeds of a new world, will now grow faster. Congratulations.

Congratulations from Puget Sound…Pacific Cascadia Bio Region. We can all be proud…not “strut your stuff” proud but happy proud!

Yesterday we had a large rally in Seattle and all ages testified to stop the coal train project from Billings, Montana to Bellingham, Washington. It was intense and lasted 3 hours. We are on the same team…across the waters…and our voices and values are getting louder and stronger!

I always enjoy your humor, Rob! You are a good storyteller and know how to have fun!

Congratulations Rob and the whole Transition Network.
Proud to be in transition also in our village, Santa Coloma de Queralt (Catalonia)

Congratulations!!!!
I’m from Portugal, where i’m proud that things are happening. However i am living in Kinshasa DR Congo, where things are far away from transition ideals.
Anyway, as a volunteer in a NGO school, i’m trying to sensitize the kids to the environmental issues doing an recylcing workshop, wich gives me hope to the future.
Once again Congratulations for all your Work.

CONGRATULATIONS!!!!! This makes me so happy.

Congratulations, but, specially, THANKS A LOT for the excellent work that you are doing in Totnes pursuing a cause that trancends yourselves: you are working for the commons. Thanks Filipa, Fiona, Ben, Rob, Naresh, Thanks everybody up there.

Trnasition has a long and beautiful way to go. Nobody could prevent it from gaining profile because it doesn’t protest, but purposes a way to a desirable future; it fights no one; shines our future; doesn’t need big money; and is led not by any political party but by people empowered by a beautiful shared vision.

More than an option, Transition is the way ahead.

Many congratulations and well done indeed!! Am about to embark on doing my bit for the Transition cause in Surrey (England) and this success in Europe makes a wonderful opener for my talk I’m giving next month. What a great start to 2013. Happy New Year to all who are involved with this most vital cause.

Well done from OVESCO. It’s great to see the spread of TTs in Europe.