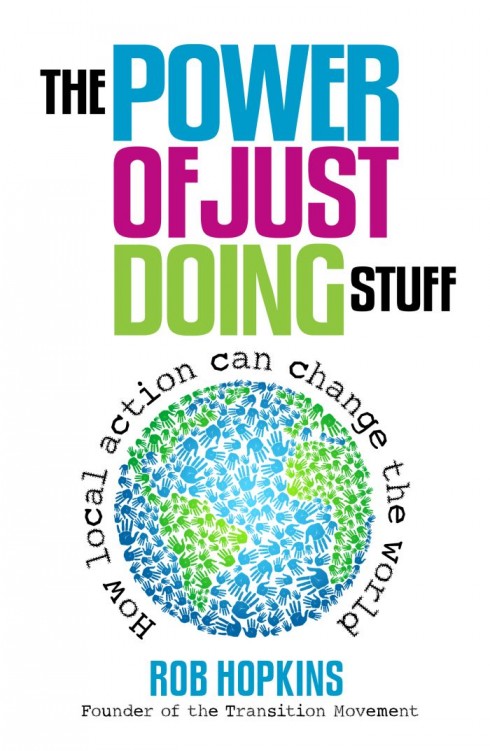 There are now just over six weeks until the publication of The Power of Just Doing Stuff: how local action can change the world. I thought this would be a good opportunity to tell you a bit more about it and why you might want to start building into a fever pitch of excitement.  It will be published second week of June, will have 160 pages, will sell for £7.95, will be a thing of great beauty, and an inspiring introduction to what Transition is and the ‘Big Idea’ that it represents.  Here’s a longer introduction:

“Something is stirring. People around the world are deciding that the well-being of their local community and its economy lies with them. They’re people like you. They’ve had enough, and, rather than waiting for permission, they’re rolling up their sleeves, getting together with friends and neighbours, and doing something about it. Whether they start small or big, they’re finding that just doing stuff can transform their neighbourhoods and their lives.

The Power of Just Doing Stuff argues that this shift represents the seeds of a new economy – the answer to our desperate search for a new way forward – and at its heart is people deciding that change starts with them. Communities worldwide are already modelling a more local economy rooted in place, in well-being, in entrepreneurship and in creativity. And it works”.

In a couple of weeks you will be able to pre-order your copy here.  The aim of ‘The Power of Just Doing Stuff’ is to take Transition mainstream, to reach out to more people, and to make it famous.  Now is very much the time to be doing that.  It aims to share the ideas that the Transition movement has defined over the last 8 years in a way that connects with people both within it and outside, and to share the experience and thrill of working as a community and taking power back into our own hands.  We feel this really represents a landmark publication for Transition, a real push to scale up these ideas and their impacts.    It is also much more international than previous Transition books, with stories from around the world.

Chapter 1: Why we need to do something

Chapter 3: The power of just getting on with it

Chapter 4: Daring to dream: where we could end up

We’ll be keeping you up to date with developments and are really excited about the possibilities around this book’s publication.  We want it to make a big splash, so any thoughts you might have in terms of how we do that will be much appreciated.

Are there plans for publication in other languages?

Yay! This will just be fab Rob, can’t wait to read it and help spread the word.

Thanks Rob! We’re waiting with anticipation in Canada too! BTW, we could use it in French here in my area of Ontario.

What will the cost be in dollars…?

Rob was co-founder of the Transition Movement at the very beginning. He is only founder today?

What’s the best way to get the book in the U.S.? Will there be a local distributor?

How soon will it be available through Chelsea Green in the States?
looking forward to buying multiple copies–some will go out in Little Free Libraries (one of which is in my yard)
http://www.littlefreelibrary.org/

Hello,
Is it possible to find it at Amazon?
Thanks