« Energy and the Common Purpose – a Book Review
“The World Isn’t Running Out of Oil” … or is it? Let’s ask the Oil Companies… »

The ENLIVEN Report – the nuts and bolts of localised energy systems… 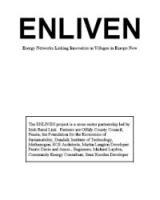 It is becoming clear to me that one of the important elements of the response to peak oil is a relocalisation of the energy grid. Most of the current scenarios about energy for the UK, including those that have prompted the Government’s revival of the nuclear option, are based on a National Grid (and also on maintaining current levels of consumption rather than attempting to rein in our out-of-control consumer culture, but that’s a subject for a later post…). I have yet to see figures for the national implications of a localised energy scenario rather than the National Grid. It would be interesting to see how much it would reduce demand. Very little research exists as to the feasibility of localised grids. **FEASTA** in Dublin have produced a very useful document, the ENLIVEN Report, looking at some of the real nitty gritty of applying this concept to actual settlements. Taking two neighbouring communities in rural Ireland, the report looks at how the town can create energy independence and resilience. The ENLIVEN team have put together, in this detailed report, a model for the benefit of all. The model they propose is groundbreaking in its vision and the degree to which it has been thought through and researched. Their proposal is for a mixture of energy efficiency, wind, solar, woodchip biomass, community ownership and management, as well as energy efficient new buildings. By careful consultation and design they have formulated an energy system to suit local needs and resources, rather than a top down ‘one size fits all’ approach. The Report has some useful information on wood pellet boilers for Combined Heat and Power, and come to the interesting conclusion that using wood to make pellets is only efficient if the wood is sourced within 20 miles of where it is used. A proposal recently put forward at a national level for a wood fired power station in the centre of Ireland is shown as the ludicrous proposal it is.

The ENLIVEN report makes the case very strongly that the future of energy is localised, is small scale, and is designed carefully to suit the area and its resources. The days of the National Grid are numbered. The case for the inefficiency of the National Grid is made very clearly here.
Also, the New Economics Foundation recently produced an excellent report called ‘Mirage and Oasis’ which looks at nuclear power and at microgeneration and localised grids. They argue that the money spent on nuclear power would be much better spent creating a local network of micro renewables. It is also a thorough and very important document.

A recent posting on GristMill observes that advocates of localised energy grids are naive, because what will actually happen when oil starts getting tight is that people will make petrol from coal, and basically squeeze every last drop of oil out of everything. I disagree for two reasons, firstly because climate change will make such things impossible, and secondly because I think with the right mechanism and the right approach, many people already would be quite excited by the prospect of localised energy. Such a mechanism is the ESCO.

The ENLIVEN Report proposes the model of an ESCO (an Energy Supply Company) as a mechanism for managing localised energy systems. As far as I am aware, there is only one such model in the UK, and that is Thameswey set up by Woking Borough Council in London. Woking, through their efforts, now has the highest concentration of photovoltaics anywhere in the UK. This arose out of the work of Allan Jones, who is now Ken Livingstone’s Energy Czar in London.

ESCOs seem like a great model to me (countries such as Austria have hundreds of them), for co-ordinating local energy independence. They also have the potential to become income generating bodies, resourcing many of the other elements of localisation. One of the good references on ESCOs is Michael Shuman’s book, ‘Going Local’. I am exploring the feasibility of this model, as it seems to me to be a great model with multiple spin offs for the localisation process.