« A Peak Oil University
Feeding ourselves or driving our cars? – The Cautionary Tale of the Humble (F)Artichoke. »

Last night in Cork city, the **Kinsale Energy Descent Action Plan** was awarded Cork Environmental Forum’s prestigious Roll of Honour Award. The award was presented by the Mayor of Kinsale, Cllr. Tomas O’Brien to the Principal of Kinsale Further Education College, Mr. John Thuillier. The event was attended by many people, including Practical Sustainability students past and present. I will post a more detailed account of the evening when I receive one, but for now here are some photos, taken by Graham Strouts (thanks Graham!) and from the CEF press release. 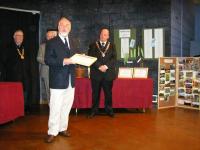 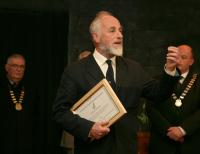 All of the Award winners (see below).

Here are two reports of the event, first from Graham Strouts and then the official press release from Cork Environmental Forum.

It has been a busy and historic week in the history of the Kinsale Energy Descent Action Plan. First a motion to support the implementation of the plan was unanimously supported at the town council meeting on Monday (see Louise Rooney’s account of this elsewhere on this site); and then a trip to the city for the annual Cork Environmental Awards ceremony to see John Thuillier, director of the Kinsale Further Education College, collect an award for the Energy Descent Plan on behalf of the college.

About 100 or so people were gathered in the Firkin Crane- a circular theatre in Shandon Street- for the ceremony, convened by chair of the CEF Allan Navratil.

There was a great atmosphere around the building as we gathered to witness the awards and great excitement from some of last year’s students who were involved in the hard and what must have been at times very challenging work to actually write the Energy Descent Plan: “Who would have thought as we struggled and sweated over this project last year- half the time cursing Rob for starting the thing in the first place- that we would be here now to receive an award for it- and in the same week that the council have agreed to back it!!

Congratulations. This is great news, and hot on the heels of the Kinsale County Councils decision to support transition design. Fantastic. Well done to all involved.

The last person on the left in the photo is Cllr Dermot Collins. Full marks though for listing the bunch! Kinsale Town Council had no less than 3 representatives in total at the awards ceremony – not bad, eh?