Feeding ourselves or driving our cars? – The Cautionary Tale of the Humble (F)Artichoke.

Part of preparing for oil peak and relocalisation is learning about plants that will grow in the gardens we should be starting to put in place now. One interesting and useful plant is the **Jerusalem Artichoke**. They have no connection to Jerusalem at all, actually originating in North America. The name is a corruption of ‘girasole’, from the Italian ‘sunroot’, due to their resemblance to sunflowers, to which they are related. They can be used to make sugar, and have been considered as a replacement for sugar beet. They are a very easy-to-grow garden vegetable, great for novice gardeners, but are also being researched as a source of biodiesel, to be grown on an industrial scale to fuel the nearly 30 million cars on the UK’s roads. And therein lies a dilemma. 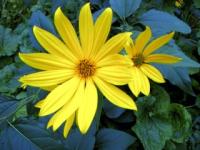 Growing them is easy. You just take some good ones from the previous year (the least knobbly ones), or from a neighbouring gardener, and plant them in a deep bed with some compost at 30cm spacings. Once they come up, they are very resilient and manage with little maintenance. The foliage grows tall and strong and makes a good windbreak. If you plant them in the right place they will provide some very useful shelter for the rest of your garden. You can leave them in the ground and eat them as you need them. The foliage makes great compost or mulch. They are easier than potatoes to grow, not being susceptible to blight.

They also have a long standing reputation for causing flatulence, due to a mischievous sugar called levulose, which we can’t digest, but which the flora and fauna in our stomachs love, and in consuming it make a lot of gas, hence their nickname, the ‘fartichoke’. This isn’t great news for anyone in our immediate vicinity, but the good news is that the more we eat the more we get used to them and the problem gets less. The English botanist John Goodyer who first grew them in the UK wrote “which way so ever they be dressed and eaten, they stir and cause a loathsome stinking wind, thereby causing the belly to be pained and tormented”. He also gave some to his friend, Tobias Venner, a doctor from Bath who specialised in stomach complaints, who found them “somewhat nauseous and fulsome to the stomach”.

I really like them, even though they are an acquired taste. I tend to agree with Jane Grigson in her classic book “Jane Grigson’s Vegetable Book” where she advocated eating them “a little and not too much, but often”. Her book is full of excellent recipes for making the best of them. Artichokes are as nutritional as potatoes, with six times the amount of calcium, and breeding could yet improve their size and lessen their explosivity. However, I did serve them up to my family for supper tonight, fresh from our veggie box, and my kids rather looked down their noses at them. In fact they didn’t go down well at all, but you can’t have everything. 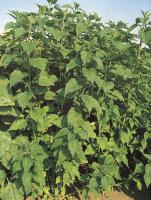 What they got me thinking about though, as I scraped half of them, barely touched, into the compost bin, was the fact that the humble artichoke is currently one of the plants being researched as a source of biodiesel. University College Cork are doing some research into it, and there is some interesting information on it here and here. While clearly preferable to imported palm oil (which I wrote about last week), it still boils down to the ultimate point that we have to either decide whether we eat or drive.

In 1975 in “Can Britain Feed Itself”, the most recent (believe it or not…) study on the feasibility of UK food self sufficiency, Kenneth Mallbay ascertained that the UK could feed itself, but only if we ate a lot less meat. Nowhere in his report did he look at taking out of food production the amount of land it would take to grow sufficient biodiesel to power all the cars in the UK. I suspect that had he done so, he would have concluded that the two were completely incompatible.

Paul Mobbs in his essential book “Energy Beyond Oil” states that the average UK car run on biodiesel would take 1 hectare of productive land to grow the oilseed rape. To run all the cars would require the UK land mass many times over. George Monbiot in his devastating article (for biodiesel enthusiasts anyway, profoundly enlightening for the rest of us) in last week’s Guardian point out that *”there is enough waste cooking oil in the UK to meet one 380th of our demand for road transport fuel. Beyond that, the trouble begins”.* What will the rest of the cars run on. The answer, in short, in my opinion is, they won’t.

This is the core issue for me, and the one that needs addressing above all. How do we maintain the road transport infrastructure beyond oil peak? There are fanciful flights of wishful thinking; we’ll run them on hydrogen, we’ll run them on biodiesel, electricity, or compressed air. None of these, beyond the practicalities of how such fuels would be produced on such a scale (for example running the UK’s car fleet on electricity would require either 100 new nuclear power stations or a land mass the size of Wales covered in windturbines), address the question of what the roads or the cars themselves would be made of. Once you think through all the details, it becomes clear that unlimited national travel and private car ownership is not a runner.

For me, the humble artichoke represents this dichotomy very clearly. When we look at its knobbly form, do we see it as a fuel source or as a food? Ultimately we have to make this choice, so we might as well start practicing now. Do we see it as one small element of a resurgent back yard agriculture the length and breadth of the land, as a reliable staple to take its place alongside the potato as part of a locally grown diet? Or do we have visions of thousands of acres of them being grown (almost certainly at a net energy loss) to run our cars? For me the artichoke opened up a whole new world of wierd and wonderful vegetables, best advocated in Simon Hickmott’s excellent book ‘Growing Unusual Vegetables’, which will revolutionise your idea of what a vegetable garden can contain. For my part, I would rather design the car out of our lives, and the artichoke in, albeit “a little and not too much, but often”.

With a bit of genetic engineering we shouldn’t have any problem feeding everyone: 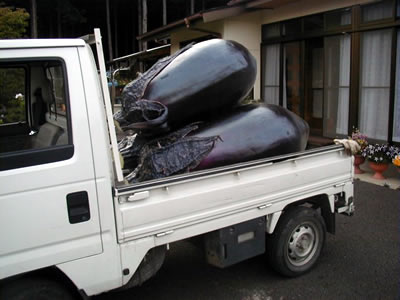 But it looks like we’ll need cars to move the food around though!

putting the wider concerns aside for a minute, i’ve put jerusalum artichokes into kimchis and other ferments and not noticed too ill a wind. they retain a nice crunch too. it’s possible the fermentation breaks down the difficult to digest carbs.

when my flatmates worry that my vege ferments smell like fart I try to explain them that that’s the fart leaving the food. not an easy sell, but may well be true.

i also read that levulose/fructose is digested better in presence of glucose – so a fruity kimchi might be even better, or just follow it with some honey, bananas or cherries or other high glucose fruits 🙂

As you said, we ultimately have to make a choice, whether we wish to grow acres and acres of plants for biodiesel, or is there some other way out?

I think there are related possibilities – one such is using oil from algae as biodiesel. Though research is in a nascent stage, this looks promising, because yields from algae are much higher for similar acreage. Of course, at this stage it is not clear if biodiesel from algae will be a net energy gain, but at least there is something to look fwd to