« Feeding ourselves or driving our cars? – The Cautionary Tale of the Humble (F)Artichoke.
The Lessons from Kinsale – Part Two »

The Lessons from Kinsale – Part One

With the successful week that the Kinsale Energy Descent Action Plan (KEDAP) has just had, this feels like a good time to take a look back over the process and try and identify and draw out any lessons that can be learnt from the process with a wider applicability for those of you planning to develop a similar approach elsewhere. In today’s posting I am going to present the background to the KEDAP process, and outline the first principle. Over the next few days I will add more principles, as well as exploring what perhaps has not worked so well with it, and aim to pull it all together at the end. I am publishing it like this by way of a two way dialogue, please feel free to make suggestions and comments and add your own experience, especially if you have been involved in a similar project, or even in the Kinsale one! 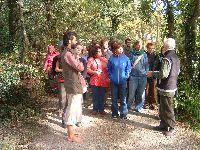 The process that produced the Plan was begun in September 2004 when, inspired by the work of Richard Heinberg and his Powerdown concept, and also David Holmgren’s “Permaculture – principles and pathways beyond sustainability”, I began to work with the second year students on the Practical Sustainability course to devise a strategy to enable Kinsale to make a smooth transition down from the oil peak. This began with a talk from Colin Campbell and a screening of *The End of Suburbia*. We then made numerous visits to various ‘green’ projects in the area, and spoke to a number of people with useful opinions on the subject and with relevant skills. This then led to the first stage, of pulling together a picture of the challenges facing the town, as well as beginning to identify a number of possible areas of the challenge for consideration.

In February the staff and students hosted and facilitated a one day Open Space event in the Town Hall, which was attended by around 45 members of the community. They watched the End of Suburbia and then explored the issues it raised through Open Space. This yielded a lot of very useful information. The students then began to work up their ideas, the ideas from the Open Space event and also ideas from further research into a timetabled plan for the town. The final Plan was produced in May 2005, and was printed in time for the Fuelling the Future conference, which brought together many of the leading thinkers in the international peak oil movement. The printing was in part funded by Kinsale Town Council and Kinsale Environment Watch.

Since then, the Plan has been taken over by **Transition Design**, a not-for-profit company, set up by Louise Rooney and Catherine Dunne, former students of the Practical Sustainability course. They made a formal proposal to Kinsale Town Council that the Council support the motion that Kinsale adopt the Plan’s recommendations and work towards becoming a ‘Transition Town”. This was unanimously passed by the Council in December 2005, and work is now underway to begin its implementation. A more detailed account of the Kinsale process can be found here and the Action Plan is available in a free download here

It would have been easy to fall into the trap that so much campaigning and activism falls into of creating a sense us ‘them and us’, painting the Council as being the villains of the piece because they had failed, thus far, to begin formulating responses to peak oil, indeed done very little that could be called “green” at all. The KEDAP strenuously avoided setting up this dynamic. Members of the Council and other ‘pillars’ of the community were invited to the Open Space day as well as to the Fuelling the Future conference, many of them were approached and asked for their views and the Town Hall was used to host the Open Space event. The project was always carried out in a spirit of inclusion and openness. Most of the local restaurants and cafes were asked to donate food for the lunch for the Open Space day, and felt included and interested by what was going on. The Practical Sustainability course has attracted, from the outset, a wide range of people, many of them from Kinsale itself, who helped spread the concepts around the town. 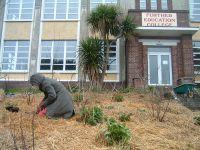 It is very easy to fall into blaming others for not doing anything, but often when we take the time to sit and listen to others, we find they share many of the same concerns but lack the skills, time, resources or motivation to do anything. To alientate people through criticism is ultimately self defeating. Beginning this process elsewhere, this always strikes me as one of the most important principles, creating a process which is inclusive.

The more I have been involved in things like this and have met people working in positions of authority, be they planners, engineers, councillors and even politicians, I have seen ordinary people, often with families, just as bewildered by turns of events and which way to go as everybody else. For us to scream “why aren’t they doing anything” does nothing to help, very often they have as little clue as to what to do as the rest of us. For me, coming from an activist background, this has been a very important lesson to learn (clearly it is not always the case, sometimes people are deliberately obstructive for whatever reason, but in most cases it is). Most of the actual techniques for avoiding sinking into ‘them and us’ comes from from the next principle “creating a sense that Something is Happening”, which I shall explore in the next posting.