The Lessons from Kinsale – Part Two

**Lesson 2 – Creating a sense that Something is Happening.** 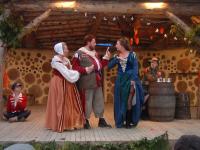 The KEDAP process arose from the Practical Sustainability course at Kinsale FEC, which began in 2001. Over the last 4 years, it has developed a reputation in the town for being a place where unusual yet fascinating things are occuring. People often commented to me that they loved the ‘buzz’ around the town created by it. The various building projects that have taken place there have particularly been of great interest, indeed sometimes students would spend the morning cob building or clay plastering, and then head down to the town for some lunch, leading to their being fondly referred to in the town as the ‘Mud People’. We also had an annual Open Day where visitors would eat pizza from the clay pizza oven built by the students, eat salad from the polytunnel, have guided tours and generally soak up the atmosphere.

The amphitheatre project at the college which was completed in May 2005 did a great deal to put the college on the map. Many who attended the performances of ‘The Merry Wives of Windsor’ put on by the college’s drama students, talked about the ‘magical’ feeling of the space. The college’s combination of interesting courses and groundbreaking practical projects has done much to make the community well disposed to the Action Plan process when it began. When it came to developing the Plan itself, people were delighted to have input into it, and the reputation that had been built up for work that was exciting and done with good heart went before it. For people starting from scratch in other settlements I think it is one of the key factors for the success of this process, creating a ‘buzz’ from an early stage. 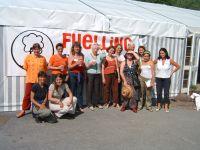 This could be done by staging a really uplifting and high profile confererence, as was done in Kinsale with the Fuelling the Future conference. A conference such as this, if designed with lots of outreach elements, and also involving local people with relevant skills and knowledge, can really embed the process in the town, bringing in new information and inspiration, while at the same time reinforcing and reaffirming the work that others have already been doing in the town. Remember that you will almost certainly not be the first person in the area to have developed an awareness around these issues. A high profile conference or similar event can draw in some very surprising people who will become central to your efforts. One great example of this is the Community Solution in Ohio, who run the annual Community Solution conference (which originally inspired Fuelling the Future) and are now branching out into all kinds of other things. They also produce a wonderful newsletter that you can download from their site.

Another way of creating this ‘buzz’ is through developing a reputation for addressing concerns that are seen as important more widely than peak oil. For instance some of the college’s students organised a clean up of a local nature area which was reported in the local press. Some others designed and planted a permaculture garden for a local hostel. One of my favourite examples of this is the City Repair organisation in Oregon in the US who do a festival every year called the Village Building Convergence, building cob bus shelters, community gardens and what they call “intersection repair”. They create a wonderful sense of innovate and positive things happening. I think we have yet to really understand the power of an approach based on solutions offered with positivity and non-judgement, as opposed to a more adversarial one. People get to see that you ‘walk your talk’, that you live by your ideals in a way that has tangible benefits for others. 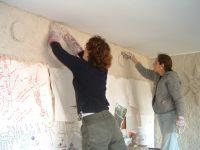 There are many other ways to create a Sense that Something is Happening, perhaps you might have some thoughts that you might post below. When I say ‘something’, I don’t mean just any old thing, what we need to communicate is that this ‘something’ is profoundly meaningful and transformative, and has a sense of magic and a spark of wonder to it. To conclude, I feel that creating this atmosphere is like the oil that lubricates the engine of your energy descent process. The more you can create a feeling that something important, positive and dynamic is underway, the less friction and resistance your work will encounter.

Rob
I’m really enjoying dipping into this website every day, especially reading these ‘Lessons’ – hopefully myself and Catherine Dunne will have some lessons to contribute in the New Year when we are further down the process here in Kinsale.
In this particular lesson, I’d like to add that ‘Creating a sense that something is happening’ is really tapping in to that ingrained trait in everyone: Curiosity. If you get people curious about what you’re doing, they ask questions, take an interest and all of a sudden the table is turned: you’re not trying to ‘sell’ an idea, you are merely acting as the conduit for the information to flow. People are bringing it out of you – and I think that’s very important, as generally people don’t appreciate ‘missionaries’ – but if they are genuinely curious – they’ll ask! If there’s a buzz about – they won’t want to be left in the dark! It saves your energy and harmony is maintained. ‘Creating a sense that something is happening’ takes creativity and a good understanding of what makes people tick.
I think it would be great if people shared ideas about what worked in their communities with regard to this lesson. I, for one, would love a list of ideas to dip in to for future reference.
All the best.
Lou

[…] The very informative blog Transition Culture has pointed to Portland’s City Repair as a great example of “creating a sense that something is happening” in response to peak oil and peoples’ desire for sustainable solutions. Another way of creating this ‘buzz’ is through developing a reputation for addressing concerns that are seen as important more widely than peak oil. For instance some of the college’s students organised a clean up of a local nature area which was reported in the local press. Some others designed and planted a permaculture garden for a local hostel. One of my favourite examples of this is the City Repair organisation in Oregon in the US who do a festival every year called the Village Building Convergence, building cob bus shelters, community gardens and what they call “intersection repair

Eat The Suburbs! » Energy Descent Action Plans and Kinsale links
26 May 6:47am