The Lessons from Kinsale – Part Four

I once did a course with Australian permaculture teacher Dave Clark, who talked about his experiences working doing permaculture in refugee camps in Macedonia. You can read more about his work here, here, and especially here. He was dealing with large numbers of people moving to places with no infrastructure, all of which had to be created. He did amazing work, building strawbale buildings, food gardens, putting in miles of swales and hundreds of thousands of trees. One thing he said really stayed with me. He spoke of having to work with professional engineers who would design something such as a drainage system, which Dave could see wouldn’t work, but which, because the person was a ‘professional’ could not be questioned. He saw much money wasted through this unchallengable ‘rule’ that the professional is always right. He talked about how in his work he always worked from the premise that he was wrong. This designed into the process the openness to reassessing at any stage.

An **Energy Descent Action Plan** should be like this. It is not cast in stone. It is a collection of ideas that should be reworked and revised regularly. The original idea was for an annual revision, with each new update containing news of what had been achieved since the last one. From the experience of those now driving forward the Kinsale process, this is too onerous a task, what with the time required to actually implement the thing. The principle still applies though, that once the first plan is done, it is taken out into the community and ‘tested’ through a series of specific Open Space events, say, one on food and one on housing. This would take the chapter on that area and explore its feasibility and desirability through Open Space. One could then produce specific publications on an area such as food or education, but which links back to the original Plan. 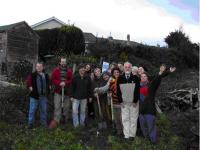 The worst case scenario would be what happens with some other ‘Plans’. They become, like the work of the engineer referred to above, carved in stone, immutable and fixed. “We are working our way through the Plan”, even though that Plan may be long since irrelevant. Be designing in the flexibility to reflect and apply the principles of Action Learning to the process, we can make it infinitely more powerful, and give the community a far stronger sense of ownership and involvement.

Eat The Suburbs! » Energy Descent Action Plans and Kinsale links
26 May 6:54am

Just wondering what exactly Dave Clark said that so inspired you?

Well spotted! I don’t actually say there what it was do I?! Ooops. It was that we should always assume in what we do that we are doing it wrong, always have that openess to the fact that what we have designed we have got wrong. Struck me that to operate with that degree of humility is essential….
That was it really!
Thanks for pointing that out!
Rob