« Plan B revisited – now with added Peak Oil!
So You Still Think Nuclear Power is a Good Idea? »

Think-and-Do-Tanks … learning from the Neo-Cons.

One thing that really struck me when I attended a lecture Bernard Lietaer gave the other week, was when he talked about the need for us to set up what he called **’Think and Do Tanks’**. He talked about the neo-cons in the US, we may not like them very much but they have been highly successful at making their vision for the world a reality. They didn’t just have an idea. They also worked out the fine details of how to implement it, prepared budgets and also drafted the legislation that would be required. They lobbied Congress very skillfully and now here we are as their vision starts to become reality around the world. If you aren’t sure what their vision is, then I suggest you read their manifesto, Rebuilding America’s Defences proposed by their think and do tank, the Project for a New American Century(PNAC). 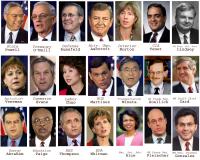 PNAC contains many, such as Paul Wolfowitz, who went on to become members of the current Bush administration. You will find a good overview of who’s who in PNAC here. It is an appalling document, the significance of which is set out very clearly in Mike Ruppert’s book “Crossing the Rubicon” and at PNAC.info – Exposing the Project for a New American Century, an excellent website which monitors PNAC and reports on their activities. If you want a clear view of the ‘map’ behind US foreign policy and its relation to peak oil, it is essential reading.

Lietaer’s point is that those of us who are proposing solutions that need to be rolled out on a large enough scale to be an effective response to peak oil need to be as organised as the PNAC (even if not, unfortunately, as well funded!). We need to not only state what we want (and don’t want), but work the ideas up so clearly that they can just be adopted as they are. Energy Descent Action Plans are a great tool for this and could, as well as setting out a timetable of work that needs to be done, make some attempts at costings, draft any new legislation or changes to the planning laws that will be needed, any new legislation. The Kinsale Plan, for example, contains a draft new planning regulations that all new building in Kinsale would be required to meet, which the Council could write into their planning regulations in the morning.

Our plans will need a degree of credibility and autoritativeness that will ease their implementation. I am sure that can be done, and it will need to be done. One of the things I plan to do in September is to set up a number of Think and Do Tanks in Totnes to guide different areas of the Action Plan, housing, energy, food, education and so on. What Lietaer’s words impressed upon me was the need for profoundly well thought through ideas, backed up with all the information that will smooth their transition to realisation. We need to get this right.

Your post meshes nicely with a recent article about fundamental reframing of issues (a bit US-centric but pertinent none the less):
http://www.alternet.org/story/31318