« Can We Use Fear as a Motivator for Change? (slight return)
Another Indicator that the Peak is Near… »

If Lawns Were a Psychosis, they would be… obsessive compulsive disorder 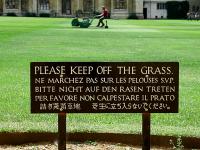 The terrible case of Charles Martin, the Ohio man who shot a neighbour’s son to death for walking on his lawn has shown us the flipside of our cultural neurotic obsession with lawns, those neat, tidy, manicured, and ultimately useless landscapes. This man was so enraged that someone would walk on his grass that he reached for his shotgun. Lawns are a classic example of our dysfunctional society. Here is a form of land use, described by Stephen Morris as ” the Marine haircut of the plant world”, that uses more energy, pesticides and herbicides (and in some places, water) than agriculture, yet is entirely useless. Where our oil-poor ancestors would have had potatoes and chard, we have lawn. I am delighted to be able to announce to you though, Ladies and Gentlemen, that the Days of the Lawn are numbered.

Grass does of course have some uses. You can’t play football or cricket on a bed of leeks (although my kids, much to my chagrin, did try a couple of times). What I take exception to is lawn as ‘landscape’, or as an ‘ornamental’ element of a garden. If no-one is going to play football on it, make love on it, have a picnic on it or run around on it, then really it has no place. It’s not even as though as a decorative plant it is even that attractive.

The Great Lawn Hater himself is Bill Mollison, cofounder of permaculture and lawn-owner bater supreme. here is an excerpt from an interview with Scott London.

>London: What kind of overconsumption bothers you the most?

>Mollison: I hate lawns. Subconsciously I think we all hate them because we’re their slaves. Imagine the millions of people who get on their lawn-mowers and ride around in circles every Saturday and Sunday.

>They have all these new subdivisions in Australia which are between one and five acres. You see people coming home from work on Friday, getting on their little ride-on mowers, and mowing all weekend. On Monday morning you can drive through these areas and see all these mowers halfway across the five acres, waiting for the next Friday. Like idiots, we spend all our spare time driving these crazy machines, cutting grass which is only going to grow back again next week 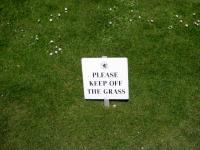 There’s another article by Bill about lawns here. Can it really be right when so many people in this world are starving to expect them to grow our food on land they need so desperately themselves, while we potter about on sit-on mowers making the land we should be growing our food on look like a billiard table? Of course not. Reimagining lawns as abundant vegetable gardens is one of the most useful things we can do in terms of more sustainable living. Less reliance on trucks, motorways, refrigerated warehouses, pesticide companies, herbicide companies, packaging producers, multinational seed companies (I could go on… and probably just have…). Few things are more delightful than digging up a lawn and planting mizuna and salad rocket in its place.

Aaron over at PoweringDown has written a great piece called I Feed Me, which is a good overview of what we should be doing with our lawns. In Graham Bell’s book ‘The Permaculture Way’ (recently reprinted by Permanent Publications) he talks about the deep neurosis in our culture that produces immaculately weeded flower beds. In a more permacultural future, he argues, Weeders Anonymous groups will emerge where people will explore what it *really* was that made people so obsessive. The same goes for our lawns. There is something profoundly dysfunctional about our most prevalent form of land use, as Charles Martin has shown.

Even David Beckham has now come out and said that he suffers from obsessive compulsive disorder, needing to line everything up in pairs (note how he mentions this in relation to his need to arrange his cans of Pepsi, getting his main sponsor in there…) and order his shirts in order of colour. A spokesman for the charity OCD UK said;

>”There is still a lot of stigma about the condition and even GPs are not very good at picking up on it. Young men in particular are often reluctant to come forward and ask for treatment, so to have someone like David Beckham come out and talk about it is very good.”

Perhaps this will open the floodgates, and celebrities with large lawns will start to talk about their own inner turmoil that has produced the vast lawns around their mansions. “Sir Elton John broke down in tears last night as he talked about his battle to control his obsession with neatly mown lawns…”, hey, you never know…

The End of the Age of Cheap Oil will signal the gradual demise of this green cancer, to be replaced by nodding leeks and curly kale. Our obsessive neurosis for immaculate lawns will vanish as something we will look back on and laugh about from our cut-and-come-again salad-rich future. If I might suggest the best place to start with de-lawning your life, John Jeavons’ classic “How to Grow More Vegetables Than You Ever Thought Possible On Less Land Than You Can Imagine” is it. A more profound antidote to lawn-based obsessive compulsive disorder I can’t imagine.

**PS.** Just came across a great article on lawns in the Augusta Free Press, called Nice lawn, M’Lord, but please don’t eat the grass by Erik Curren. A very good piece, it contains the fascinating piece of information that “Americans spend $41.7 billion annually on the green, green grass of home. That’s almost as much as President Bush wants to run the Department of Homeland Security in 2006”. Well worth reading… , and picks up on many of the ideas in the piece above. Ultimately he asks, what are lawns for? He quotes author Janet Lembke who says “to sell lawnmowers, that’s what lawns are for…”.