Interpendence continued – the story of the Swiss Cottage.

One of the most gorgeous buildings I have ever seen is the Swiss Cottage near Cahir in County Tipperary. It was built around 1810, and is a fine example of cottage orné, a style that was particularly fashionable among the well-to-do at the time. The cottage was originally part of the estate of Lord and Lady Cahir, and used for entertaining guests. As well as being a fine example of gorgeous architecture, it also offers a very useful allegory for the concept of Interdependence I wrote about yesterday in my review of the recent NEF report on the subject.

The Swiss Cottage was probably designed by the architect John Nash , famous for designing many Regency buildings (although no-one can be quite certain as the architectural drawings have never been found). It is a stunning building with a gorgeous undulating thatched roof, and rustic woodwork around the outside. It had fallen into a poor state of repair until it was lovingly restored by the Office of Public Works in the 1980s. Despite being a gorgeous building, the Swiss Cottage does reflect some of the more bizarre aspects of colonialism. The house was built for Lady Cahir, on land that, according to the information board there, was ‘acquired’ in the early 1800s (acquired as in ‘right you lot, bugger orf’). It was built in the style of a romantic fairy tale cottage, the kind of thing you might come across on your way to Little Red Riding Hood’s grandma’s. Apparently the aristocracy of the day liked to pretend they were peasants, and have peasants’ tea parties. They lived in the house during the summer, in a kind of rural idyll, with their friends dropping by for tea parties on the lawn. 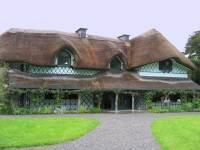 How it used to work was that the servants would arrive for work in such a way that the nobs upstairs were unable to see them coming and going. They would beaver away downstairs preparing the food and drink, and then mysteriously ‘appear’ in the hallway with trays of tasty morsels. The illusion was that these well-to-do folks were living a simple life in nature, with beautiful gardens and lovely woods. The reality of course was that they were colonials, living on land seized from the local people, employing a large number of relatively poorly paid people to run the whole show, while they lived an illusory life above. This, for me, resonates with the whole of the NEF report, but in particular with the following paragraph;

>Rich countries have seen remarkable local environmental improvements in recent decades. In places like London, which was famous for its toxic fogs, air and water quality have improved beyond recognition. In may ways, though, this has only been possible because the mining and manufacturing that feed rich-country lifestyles increasingly takes place elsewhere. By and large, pollution and resource depletion no longer occur within eyesight or earshot of the final consumers. The ecological burdens created by the way we live have become hidden.

This is one of the key aspects of the drive to reduce carbon emissions and our dependence on fossil fuels. Many people seem to have forgotten that the only reason we are able to even talk about reducing emissions at all is because we no longer make anything. It is all done in China, who we scold for using too much oil and emitting too much carbon. I have read very little that actually acknowledges that we will have to start making things again, and that that will require a lot of energy. 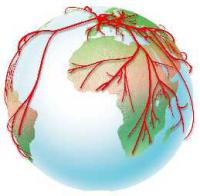 Like Lord and Lady Cahir, we delight in being able to buy an electric toothbrush for £1.99 (Totnes High Street, Saturday), yet don’t consider the army of poorly paid ‘serfs’ and unequal trade arrangements that made its creation possible. The NEF report cover shows a graphic of the globe, with the UK at the centre, and blood veins radiating out around the world, sucking sustenance from far and wide. Of course our ‘slaves’ take two forms, the poorly paid and ill-treated workers of the ‘developing’ world, but also the ‘energy slaves’ made possible by cheap oil. It is estimated that the average Western household has at its disposal the equivalent of 80 slaves due to the cheap oil at its disposal.

When the Age of Cheap Oil comes to a close, and we no longer have access to our ‘slaves’, be they physical or energetic, we will increasingly find ourselves having to do what they did for us ourselves. The blood vessels shown in the NEF diagram will start to constrict and as that flow lessens we will need what the report calls “new survival maps for an island planet”. Our days as Lords and Ladies will draw to a close.

I agree, the swiss cottage is a very attractive building. So is Cahir castle (potential tourists go check them out!) I grew up in what was once a shooting lodge in the woods on the side of the Galtees just outside Cahir so I know the area well. I also agree about the cost of things, it should cost us a sensible amount for our luxuries, the days of the £30 DVD player might be a pleasant surprise on the one hand, but they don’t last and the narrow margins mean that manufacturers have no choice but to turn to low cost economies, (here’s the selfish bit) undermining the salaries of engineers in developed counties. Not much point in cheap DVD players if we are more concerned about keeping roofs over our heads. Race to the bootom indeed.

My son and I were discussing cheap goods just the other day. I was explaining to him how people over in third world countries would build a television set for almost nothing an hour, and then when it breaks, we have to pay a domestic electrition a local salary to fix it…so now, its cheaper to buy something new than to fix something old. Unfortunately, while we don’t see the manufacture, these cheap electronics still cause an environmental hazard for us, as they end up in our landfills, and many of them contain lead or mercury parts that are equally as hazardous as air pollution. Our killer has simply become a stealthy one.

We went to Swiss cottage recently. It is very impressive. Lovely walk out there too from Cahir castle car park. And good value. Only €7.40 for the family.

This is the most gorgeous cottage. It looks so relaxing and beautiful. I’ve just been inspired to go there. Before I die I will go and see this amazing cottage. Thnx-Shelbey