Urban Wind Farms – coming to a town near you…

As I was washing up this evening and listening to the news on Radio 4, a story caught my ear that sounded too good to be true. After endless stories of wind projects being turned down across the country and all the ‘blot on the landscape’ nonsense about wind turbines, did I actually hear that **urban** wind farms could be the thing of the near future? In a very timely follow up to yesterday’s post about community renewables projects, the BBC gave a taste of things to come in the field of community wind projects.

In Dundee, the tyre factory there has put up the first of three 400 ft. turbines for which they have planning permission. They argue that their fuel bills have doubled in the last year, and that securing their energy supply will make all the difference as to whether they survive or not. They have marketed the development with the slogan “making tyres from fresh air”. Well yes I thought, that and all the oil byproducts as well.

Anyway, residents interviewed voiced opinions that ranged from thinking they were beautiful, to the usual stuff about house prices (are there any studies that actually show that living near a wind turbine lowers the value of your house?) to one woman who said they were “absolutely hideous”. Unlike watching Bangladesh sink beneath the waves I suppose, which presumably would be comparatively attractive. The reporter said that urban wind farms were proposed for another 10 sites across the UK, including one at the Manchester City football stadium. This can only be a good thing.

The most relevant to yesterdays post and, for me, most inspiring, is the story Castlemilk, a run down housing scheme near Glasgow which is in need of economic regeneration. The piece on the BBC website, Urban wind farm plan for Glasgow, sets out something approaching what we were talking about yesterday. Although the proposal is still at the planning stage with permission having been so far granted just for the erection of a 40-metre anemometer to measure wind speed on Cathkin Braes hills above the area over the next 12 months, the underlying proposal is very interesting. The idea is to put up three turbines near Castlemilk to generate and sell electricity and raise £250,000 a year for local community projects. The article doesn’t say how they will be funded.

It gives some useful information to yesterday’s posting, in terms of the amount they expect to raise. £250,000 wouldn’t actually go that far in terms of retrofitting houses, at a rough estimate of £10,000 per house, you are only looking at 250 houses a year. Not bad but in a town of 4,000 houses, that’s 16 years to sort out the housing stock. Still, not to be sniffed at, and there are many ways it could be creatively stretched I’m sure. 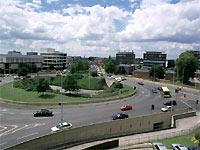 One of the things that always struck me as a difference between living in Ireland and living in England is that in Ireland when people meet and tell each other where they are from they usually reply “ah, a fine place”, or “it’s beautiful round there”. In England, so many places are horrible, that surely the argument about ‘landscape despoilation’ usually levelled at wind projects is somewhat redundant. A nice wind farm in the middle of Slough could hardly be said to be distracting from its scenic splendour.

Will the anti-wind lobby have to come up with a whole new lot of objections specific to urban wind farms? The stuff about migratory bird routes and visual impact no longer being able to stick they’ll have to be a bit more inventive. As I have argued many times before, we need renewables, be they wind, PV, heat pumps, whatever, anywhere and everywhere, be it the Welsh Hills or the Manchester City football ground. As the Castlemilk project will hopefully prove, a wind turbine, wherever it is, looks far better when you know that you and/or your community is making money every time it goes around.

I suspect that many of us believe we will be able to transition to new forms of energy without reducing our onsumption or making significant changes in how we live.

This is going to be one of the biggest hurdles for us. For those who are trying to promote a gentler, slower, simpler way of life. And those who havent even considered this as an adaptation they need to make. I fear this latter group are going to suffer the consequences of this self-imposed blindness at levels that may end up being debilitating, the more they put off this inconvenient reality.

I flew over Holland last summer – there are wind turbines everywhere you look. In among factories and farms, alongside dual carriageways, everywhere. Inspiring.

Well, wind is surely some part of the answer. Further, we must take a detailed look at how we are living, and make adjustments. Those who refuse to do so incite natural democratic reactions that will entail social consequences, perhaps unbearable tax burdens — assuming worldwide civilization does not implode, that genteel society continues in some form.

Whether we ‘power down’ in a non-destructive way remains to be seen. We certainly cannot ‘power up’ anytime soon, nor maintain under present circumstances.

Large Change is coming, like it or not — even if this unwelcome guest doesn’t nicely coordinate on personal calendar.