« Is Our Collective Oil Dependence an Addiction? Further Reflections on the Matter …
Talk for Totnes Greenpeace – Energy Descent and Nuclear Power. »

5 Great Things About the Eden Project #5. It Shows That Anything Is Possible … Even Powerdown. 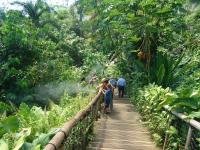 The thing that most touched me and which I most took away from my visit to Eden was the sense that anything is possible. Tim Smit had a vision, a vision of turning a clapped out and bleak old clay pit in one of the most depressed parts of the country into one of the most extraordinary places in the UK. He had no money, nothing much to speak of other than a vision and the passion with which to communicate it.

I was touched by the story of the project as told in the official booklet, which describes how he got one of the biggest engineering companies in the UK, and also one of the biggest architects, to work for him for two years unpaid, on the agreement that if the project went ahead they would get paid. When asked why they did it, they replied that they would rather have been a part of it and it not happen, than it happen and they not be a part of it. 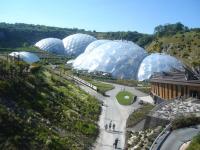 Struck me that the spirit with which Smit approached the creation of Eden is one that those of us pushing the concept that peak oil is one of the triggers for the Great Turning and those of us driving relocalisation projects can, and must, learn a lot from. How many people would have stood, 10 years ago, on the rim of an old clay pit at Smit’s side, heard his plans for the place, despite his having no money, no planning, no resources, and actually thought he had a hope? The fact that now this extraordinary project exists is due in the main to his vision and his ability to passionately communicate that vision. 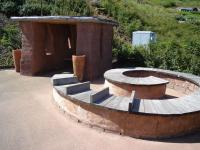 As I stand on the edge of beginning a project to attempt the relocalisation of Totnes in Devon, I have a vision in my head of a town of houses insulated and retrofitted to high standards, of localised energy systems which provide energy as well as the collateral for a local currency, urban agriculture throughout the town, productive trees everywhere possible, strong local food networks throughout the area, local manufacturing, people working locally rather than having to travel, and young people skilled for and excited about the transitions ahead. 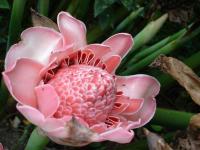 Again, most people stood at my side as I vocalise this vision might think that this is a naive, idealistic, unrealistic or even competely unnecessary. It will be due, substantially, to my and to the others involved in this initiative’s ability to communicate this vision whether or not we are successful. I feel certain that it can be done. I feel sure that in 10 years that people visiting Totnes (and the many other towns whose similar initiatives will spin off from the Totnes project) will experience the same sense of wonder as to what has been achieved as I felt as I stood on the rim of an old clay pit in Cornwall looking down on the domes of the Eden Project last week.

Tim Smit has given the world an amazing gift. Perhaps more than the nuts and bolts, the plants and the structures, the Eden Project is underpinned with an untypically English attitude of just getting on and doing things, of big-picture thinking. It is “Be Realistic, Demand the Impossible” given form. As I travelled home from south Cornwall, the gift I took with me was a spark, a fire, the knowledge that the impossible IS possible, and if we are to make this collective transition from energy ascent to energy descent and beyond, it is going to have to be, that we have to make it be.

Clearly not everyone is going to be onboard from the start, and the “wartime mobilisation” that Lester Brown, Robert Hirsch and everyone tell us that we are going to need is going to need to engage people on a scale previously unmanaged by the Green movement will hang in the main on our being able to communicate this vision, and the quality of life that it will bring. If we manage it, we may have the Eden Project to thank for at least a bit of the energy that brought it about. I shall close my Eden Project love-fest with the poster I saw there (see right) which seemed like a great quote for a book loving soul like myself.

Whre is this den located and how one gets there?
Thanks