Richard Olivier is the founding voice within Mythodrama and he works at the leading edge of bringing theatre and the arts into the development of authentic leaders. He has been a leading theatre director for over 10 years. His workshop was called the Journey of Renewal in Shakespeare’s As You Like It. For Richard the play has many parallels with Great Turning and the times in which we live. The play is about leaving a Garden of Eden and then returning to it.

The session began with his taking us through the play, telling the story and introducing its main characters. It is so easy to kill Shakespeare and make it dry and uninteresting, but as an extremely gifted actor he was able to bring it to life. He pulled out some amazing quotes from the play. One was from the Old Duke, who had been in a position of high authority but was then banished to the woods where he lived simply and had developed a deep connection to Nature. 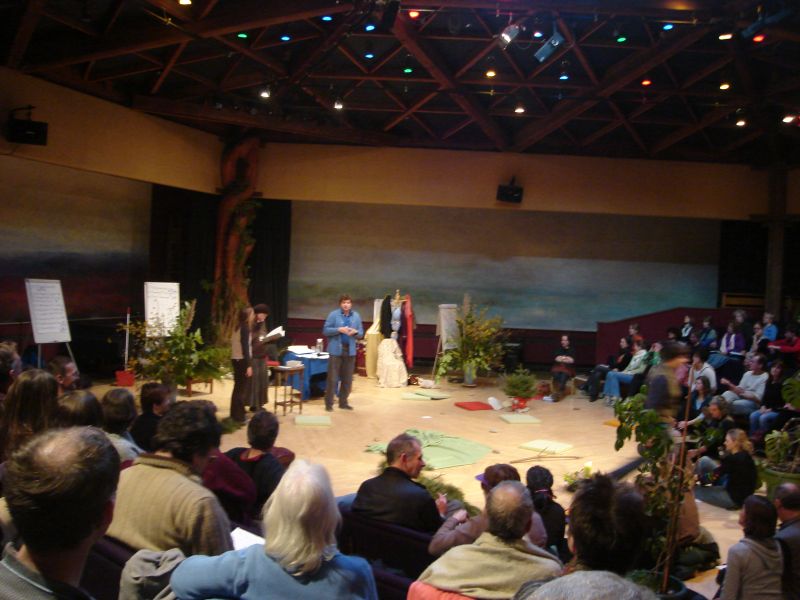 He says “these rough elements are counsellors that feelingly persuade me what I am”. When the hero, Orlando, arrives in the woods, he is armed and expecting trouble. When he meets the Old Duke, it becomes clear that there is no threat, no danger, and he says “I blush, and hide my sword”.

Later Richard talked about two things that we need in order to be successful in the Great Turning, alignment and atonement. Alignment is about the parts of a system being in line with each other, being connected and in sympathy. At its best this means efficiency, at its worst it means rigid systems that prioritise profits above people. Often highly aligned systems don’t listen and can prevent change.

Atunement Richard defined as a resonance or harmony between the parts of a system and between the parts and the whole. Highly attuned systems can also be very ineffective as they aren’t able to actually make things happen. We need both. The problem is how to move from highly aligned to highly attuned systems. When you remove a dictator for example, a highly aligned system, what happens? Chaos and breakdown. At least aligned systems maintain order, without a gentle transition we end up with chaos and rampant individualism.

The issue of sustainable leadership is about how to bridge between the two, but getting the two into an appropriate relationship is very difficult. He then identified some of the key characters and some of the key parts of the story, and invited us to chose those that spoke to us. We then, in our groups, though about our part and what it meant. Then we all came back together after lunch and fed that back. For each of the stages he had exercises that we all worked on together ( for a far more thorough account of this workshop than my shabby efforts have a look at the official Findhorn blog here).

Mythodrama is an amazing tool, and using Shakespeare as the basis for it is very dynamic, given the degree and depth of the symbolism that Shakespeare worked into his plays, which offer a rich seam to be mined. It was a workshop that leant itself to being experienced rather than being written about, all I can say here to do it justice is that it is a very deep and powerful approach that may well have a very powerful place to play in Transition work and in the building of new leadership. I hope to do an interview with Richard while I am here, so that might hopefully give a clearer idea of Richard’s work than my ramblings above.

You had me worried there for a minute, talking about “alignment and atonement”. It was a relief to realise a (rare) typo had crept in and that Richard was actually talking about “atunement”. No sins involved then. Phew!

I think there’s a typo – you used “Atonement” rather than “atunement” in para 4.

Actually, at that point I was expecting a switch from Shakespeare to Dostoevsky and some lessons that we could take from Crime and Punishment. But I was sadly mistaken and had to jump out of the familiar world of retribution and scarcity and back into the world of humour and abundance.