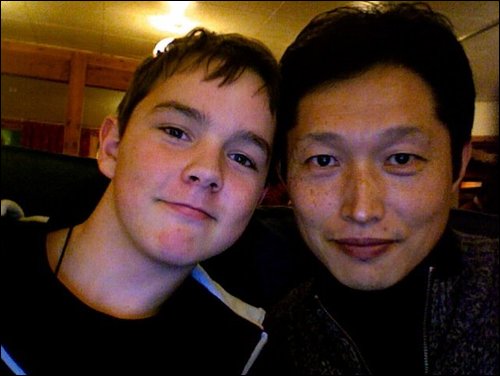 Today was sound, the presenter or speaker today was Richard Olivier who combines Shakespeare’s work with eco stuff.   The play we were doing today was ‘As you like it’ which was good as well as being funny, in the first session today Richard told us the play and in the second half of the session talked about the character we where most interested in and the part of the story we felt we were at.

Usually I comment on something funny, the food or one of the sessions but today it was a great session and we had lasagne, which was lush!  So the funniest thing that happened to day was that I saw a cat fall off a wall, which was quite funny, for its not a sight you witness on many occasions, he must have been at the Scottish whiskey.

In answer to a comment left on yesterday’s blog, most people were nude and I haven’t been to the living machine yet.
Here is me with a lovely man from Japan called Hide who is from Japan and I believe is Jin from Lost’s long lost brother. See above and right for comparison.

Thx for the comment, ill be posting again tomorrow…

Great to read your thoughts on the conference, I have to admit to having laughed out loud a couple of times.