The Beginnings of Transition Scilly…

The Isles of Scilly recently became the third Transition Islands, after the Isle of Man and the Isle of Wight. I visited for a couple of days over the recent school holidays at their invitation, to give a couple of talks and to also have a few days there. It is interesting to see the challenges that islands face in preparing for Transition, and the particular challenges and opportunities they throw up.

Transition Scilly has been going for a few months now, and has 5 core members. They are;

Also Nick Lishman (pic left, right): runs a local guest house and Kevin Leeman (pic left, left): Teacher at local school and choclatier (surely every Transition Initiative should have one of those…).

The group was formed when Jonathan contacted Nick late 2007 to discuss the idea of Transition Scilly, and one by one the other members were invited. Jonathan and Nick came to Totnes to do the Transition Training in January ’08, and Clare did the training more recently.

Transition Scilly is still in its Awareness Raising stage, which began with a screening of An Inconvenient Truth, followed by the End of Suburbia and then The Power of Community. Each film was heavily trailed on Radio Scilly (Clare Lewis presents a regular green programme, which she interviewed me for while I was there, see right), with the person who does their regular DVD review slot reviewing two of the films. The two talks that I gave were the final events in this part of their Awareness Raising stage. 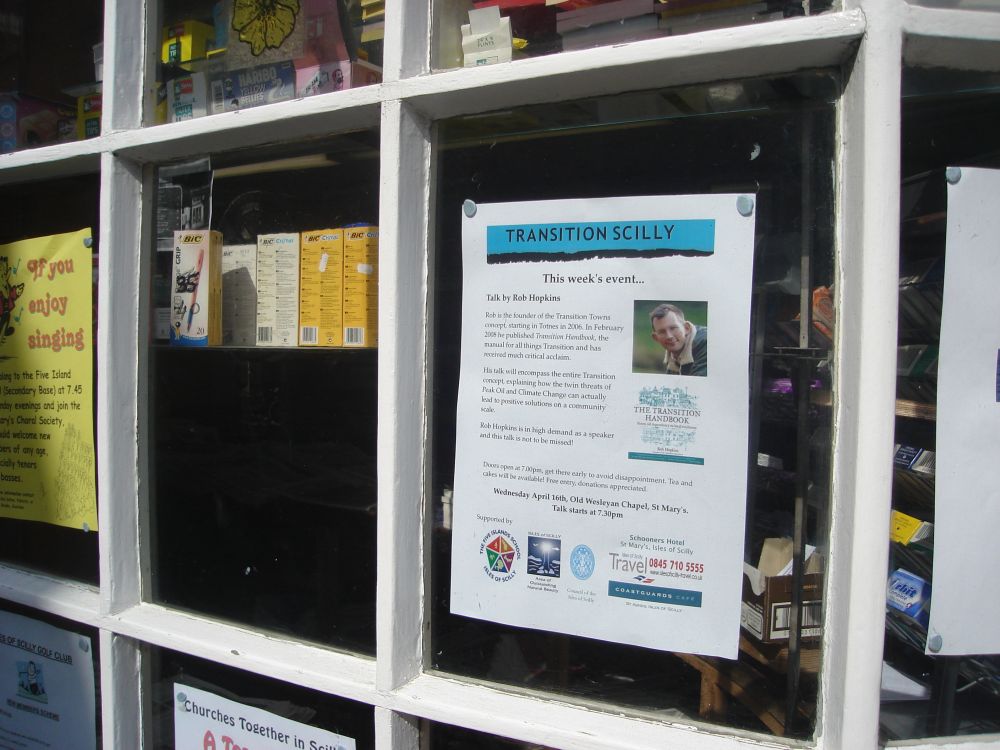 The first talk I did was to invited members of the Council, local businesses and other local organisations such as the Duchy of Cornwall. This looked more at the implications of curbing carbon emissions and building resilience on decision making on the islands. The second was a public talk which looked more at the Transition process and how it works.

The Isles of Scilly are a fascinating place to think about how the Transition process might unfold. A trip to the island’s museum offers a salutory look at how hard life in isolated regions of the UK, such as Scilly, was. The population was smaller, and recent history contained at least 2 episodes of famine. Large scale food production, a far greater degree of self-reliance, and a much more highly skilled population are much more recent in the history of the Scillies than in most places on the mainland. Even people in their 30s who grew up on the islands can remember much more fishing, a lot more food production, in particular potatoes, and a much more self-reliant outlook.

Then, in the 1960s, the Scillies has their equivalent of a huge oil find off their shores. That oil find was tourism, and rapidly a tourist infrastructure was built and now tourism comprises 85% of the economy of the islands. Many people now make the bulk of their income during the tourist season, which offers the potential of a much more substantial income than could be generated by, say, farming. Indeed, as in many island economies, many people have more than one livelihood, either working at least two jobs at a time, or having different livelihoods at different times of year.

One of the interesting challenges for the islands is that people come to the Scillies to ‘get away from’ development and modern life, perceiving the place as ‘unspoilt’ and wild. I argued that there is a great opportunity to redesign the islands so that their appeal is based around the sustainability of the place, which would in turn allow it to push things further, as that innovation would be one of the things that people would be travelling there to experience.

It would also allow the tourism that comes to support (whether via. use of a local currency or via. practical skills-based learning holidays) the transition in practical ways. At the moment, the tourism of the Scillies appeals to a particular niche, it being quite expensive both to actually get to the islands and then to stay there. It is unclear how much increase in travel costs that niche will be able to absorb.

The Council of the Isles of Scilly has produced a very thorough Sustainable Energy Strategy, which puts energy independence as a long term goal, with conservation, cutting carbon emissions and improving energy efficiency as more immediate aims. It seemed a shame to me that the Strategy is so dismissive of the windpower option. The islands are possibly unique in having one of the best solar potentials in the UK, the best wind potentials and the best tidal potentials. However, being an AONB and a SSSI, the Strategy focuses mostly on the potential for an outside company coming in to develop its tidal potential, pretty much ruling out any wind option on the grounds that “wherever feasible, sustainable energy developments (should) add to (rather than detract from) the interest and image of tourism on the Islands”.

Therein lies the rub. People visit the Scillies because it is wild and unspoilt, yet also because they like the fact that there are so few cars, more quiet, more wildlife and so on. When I first visited last year, I was surprised that there was no wind turbine on the islands, given the fact that many of the trees grow at an angle! I think that these discussions about the visual impact of wind turbines will become patently absurd once energy prices become excessively onerous, and if they (or it) are owned by the community, experience elsewhere has shown that people feel a great deal of affection for them. They are also a powerful visible statement of intent.

Alongside the visual question, another reason given for wind not being considered is the noise. In my experience of visiting wind turbines this is really not an issue, but it is interesting how on Scilly the sound of aeroplanes and helicopters to-ing and fro-ing all day, and the roar or powerboats have become something people have got used to, whereas windpower is dismissed on the grounds of being ‘noisy’.

When I was there, one of the key supply boats which brings goods across from the mainland was out of action for maintenance, which was, in a small way, focusing minds on resilience and the degree to which most elements of daily life depend on imports. It strikes me that the rising price of oil is going to impact rapidly on the economy of Scilly. Some are now warning of £1.50 a litre petrol by September, which will begin to make the costs of this dependence impact on the tourist trade. 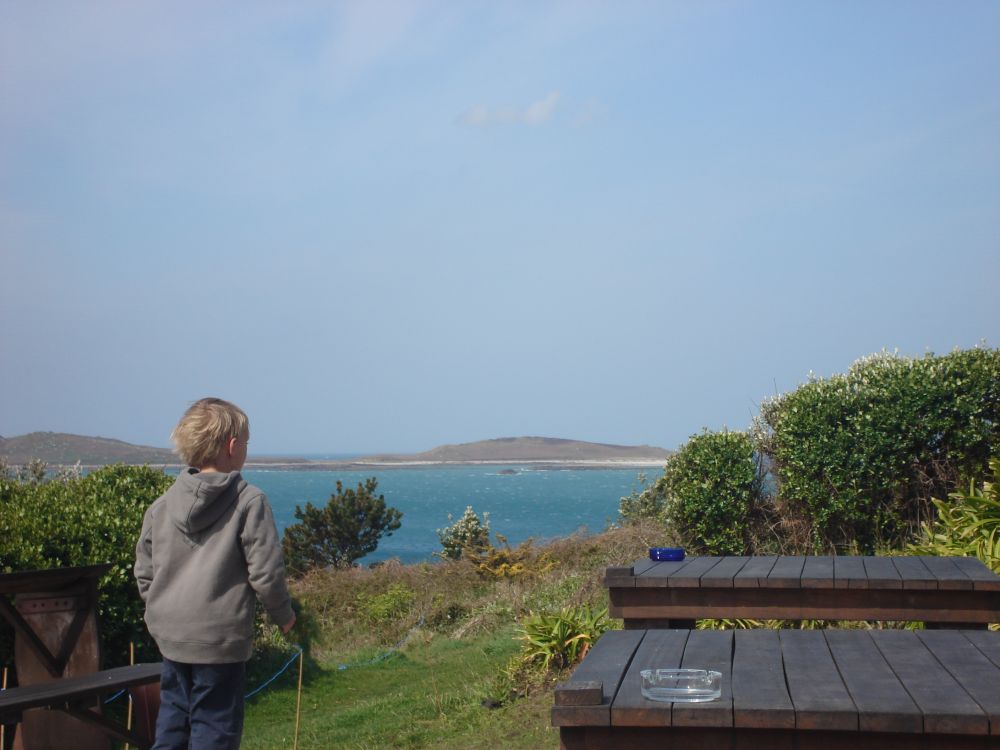 One of my suggestions was an Oil Vulnerability Analysis, to see which parts of the economy would be impacted first by rising oil prices. The Sustainable Energy Strategy offers lots of good ideas and clearly indicates a good deal of political will to make things happen, and a good understanding of the driving issues.

Time will tell whether the Transition Scilly initiative is able to deepen that process and come up with innovative and dynamic ways of increasing community involvement in the process, bringing a holistic approach that draws together food, energy, economics (the concept of ‘Scilly Money’ was discussed with great enthusiasm at both meetings), housing and so on, but they are certainly off to a good start.

Many thanks to those who sponsored my visit, including Five Islands School, Isles of Scilly AONB, Coastguards Cafe, Schooners Hotel, Council of the Isles of Scilly and Isles of Scilly Travel, as well as to the Transition Scilly folks who were such good hosts.

The windpower problem may just be one of appearances. If they had an old-fashioned-looking windmill it would become a tourist attraction, but inside they could put a generator.

We are all too used to the kind of rotating windmills that exist all over the world, but there are other kinds as well (see http://www.energy-age-wind.de/) that do not have the detrimental effect on the environment.

When I first visited the fabulous Scilly Isles around 15 years ago there was a wind turbine on St Marys, which revolved around the supporting pillar rather than on its side. It had very little visual impact, and it really made you think about energy use in such a remote place. The same is true of waste, on our most recent visit last summer we walked past the waste site (incinerator?) and this again makes you think about where waste goes, and how it is disposed of in such a cut-off community. Our camp site had good recycling facilities, which puts the area where I live (Herfordshire) to shame. I thought St Martins had a wind turbine? I know it’s subjective, but to me wind generators and alternative energy generation generally are an incredibly powerful statement; I wish someone would build one in my back yard, I would be so proud to be standing up for the future!