« The Story of a Cob Pizza Oven, Told in Pictures
Sex and the City and Handbag Insanity » 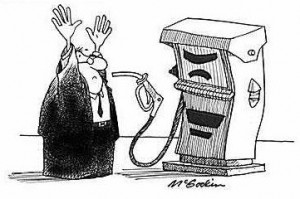 Here is an article from one of our local newspapers published last Friday, which takes a Transition-tinged look at the current oil crisis.

Why Oil Crisis Could be Trigger for a Better Future. Western Morning News. 20th June 2008

Yet among the unremitting gloom – Gordon Brown this week declared spiralling oil prices were “the most worrying situation in the world” – there is hope. The Westcountry-based pioneer of a community movement trying to wean themselves off oil argues that it may presage the most positive lifestyle changes in 30 years. Many others agree.

Rob Hopkins, who two years ago founded the first so-called “transition town” in Totnes, South Devon, reckons that the pain being felt at the pumps is already convincing increasing numbers of people to abandon their cars and move towards walking and cycling, growing their own vegetables and shopping locally.

While acknowledging this is cold comfort for hard-pressed households and oil-dependent businesses, he has said high crude oil prices are “a really good thing” so long as the response is “creative”.

A modern history lesson helps. Mr Hopkins drew comparisons with the oil shocks of the 1970s and early 1980s. The sudden rationing of oil by key members of Opec not only resulted in lower speed limits to conserve the precious natural resource but also an unprecedented burst of groundbreaking ideas. Wind turbines, solar energy and the organic movement were all born out of a desire to break the world’s oil addiction, he argues.

He said: “There is something about oil prices that focuses the mind. We have been aware of climate change for years but it has not stimulated anything like that. Necessity is the mother of invention.”

The cause of today’s oil panic may be different from that 30-odd years ago. In 1973, key Arab producers boycotted oil exports to the US and their Western European allies for supporting Israel in its conflict with Syria and Egypt. Today a murky alliance of China’s breakneck growth, “peak oil” and market speculators is at play.

Even so, the ramifications could be similar, but not just in terms of filling stations raising fuel prices to almost £9 a gallon for petrol and diesel as one retailer in Exeter did this week.

A teacher of natural building, Mr Hopkins says it was awareness of the end of the age of cheap oil – known as peak oil – that triggered the “transition” movement.

Hundreds of people in Westcountry towns and villages, including Falmouth in Cornwall and Seaton and Ashburton in Devon, have been drawn to its principles: using public transport rather than filling their cars, reducing the distance food is transported and local production of goods and services. As many as 700 towns cities and villages have joined, mainly in the UK but also as far afield as Australia.

Mr Hopkins cited the trend for growing vegetables in back gardens, spiralling sales of seeds and the revival of making your own clothes as indicators of how habits are changing.

He recently met a woman on a train who had never travelled by rail before but had opted against the car because it was now too expensive. It is not just about saving money, he contends. A world not reliant on temperamental oil supplies, which we rely on for everything from clothes to medicines, could be a much happier place. Some of the more unsavoury aspects of modern life are underpinned by oil: “We are working longer hours than in previous generations, less time with our family, more overweight.”

Mr Hopkins, hailed by commentators as a post-oil visionary, added that he did not want to rejoice in the face of widespread misery, acknowledging that “this is really starting to hurt people, particularly those businesses that are oil dependent”.

But he went on: “It is important to make the point that the more oil- dependent we are the more vulnerable we are. That vulnerability is only going to grow. The age of cheap oil is finished. EasyJet has said the age of cheap flights is over.

“There is something big happening. It is difficult and we are asking some very tough questions of ourselves. But at the same time we have a choice. We can look at this as an opportunity.”

Asked whether he had predicted that oil prices would touch 140 a barrel so quickly, he said: “Yes. I’m not surprised. It was blindingly obvious. People like Goldman Sachs are talking about 200 dollars a barrel sooner or later.”

Westcountry groups have reported more interest in recent months. Cathy Debenham, a spokesman for Sustainable Ottery, a group of people in the East Devon town of Ottery St Mary who had joined the transition movement, said more than 150 people came to its launch last month.

She said: “It is easier to persuade people to get involved when you see it every time you fill up your car with petrol, or every time you get a bill.

“I have known for a long time that driving at 70mph or less saves you money and petrol. But it is only in the last month or so that I have started measuring it. And it makes a big difference.”

“They should be taking steps to reduce consumption now. One way would be to bring back the speed limit of 50 mph, which was introduced in the oil crisis of 1973-74. Such a limit would reduce fuel consumption, save motorists money and save lives.”

» The Western Morning News Looks on the Bright Side of the Oil Crisis A Side: What The World Is Saying About A Side
24 Jun 8:36am

Across Country » Blog Archive » The Western Morning News Looks on the Bright Side of the Oil Crisis
24 Jun 10:47am

[…] The Western Morning News Looks on the Bright Side of the Oil Crisis Crude oil prices trading at a record 140 a barrel. Truck driver strikes leading to panic buying at petrol stations across the country. […]

Very true. I thought maybe it was my imagination that there are fewer cars on the road now…but cardrivers are telling me that they are thinking before using their cars these days. This can only basically be good news. Unthinking use of cars is just one of those things that people have been doing just because they can and now the chickens are coming home to roost. To me – I am finding it a blessing to have less car noise and fumes than I have been used to of recent times!

Until I started reading Vernon Coleman’s Oil Apocalypse a couple of weeks ago, I wasn’t even aware of the phrase ‘peak oil’, although I had already convinced myself of trying to promote more locally grown food. Today the mention of a survivalists story in one of sunday papers led me (via google) to this website.
Has it occurred to anyone else that the ‘climate change’ mantra could simply be a way to hide peak oil and wean people off fossil fuels?
It would be extremely convenient.
The more I think about it, the more I wonder why I’ve never heard the case made for the fact that once all the fossil fuels are gone, the major source of CO2 will be gone and climate change will get no worse – or may even start to reverse.
And, logically, if we can assume there is a finite amount of carbon/CO2 in our atmosphere/planet, what did the earth look like the last time there was so much carbon/CO2 that had not yet been tied up in plants/animals?
Just thought I’d ask!

Right now we need visionary leadership. Spending some of our last cheap oil on sustainable and lasting supports for the future would be wise. So would encouraging organics, local sustainable business, and small farms again.

Maybe, if we’re wise instead of foolish, the Lorax and his friends really will all come back 😉