« The Transition Movie: an Update from Emma Goude
Your Projects Needed for the “Transition Guide to Food” »

“The Futureproofers”. An article from Green Futures. 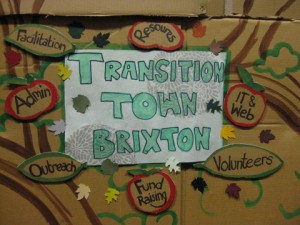 On a rooftop in Brixton, a back garden in Totnes, a village hall in Ambridge, they’re preparing for a post-oil future. So is Transition Towns busting out of the eco-niche and into the mainstream?   By Vicki Lesley and Hannah Bullock, from Green Futures magazine.

Around the country, towns are printing their own currency, turning over scraps of land to grow food and re-skilling their workforce for a future where fossil fuels are no longer on tap. When the Transition Town movement first got under way it may have sounded a little militant: “from oil dependency to local resilience”. But with 85 communities on board, 700 more looking to join, and ‘peak oil’ in the news, is this an idea whose time has come?

It began three years ago, when permaculture teacher Rob Hopkins developed an Energy Descent Action Plan to prepare the Irish town of Kinsale for a post-oil future. Since then he has expanded the concept into a 12-step Transition Handbook, which advises community leaders both on mitigating climate change and adapting to a world where fossil fuels are no longer so cheap or abundant. He believes the current economic climate only serves to reinforce the message. “Together, the credit crunch, peak oil and climate change could become the breeding ground for ugly political discourse,” he says. “What we need to do is help people see that they present an opportunity for change rather than a challenge.”

“In Ashburton, they’ve set out a time line that starts with simple plans to open the library more often, and ends with a vision of giving over most of the land around the town to food and medicine by 2015”

All well and good in theory, but in practice can Transition Towns bring about radical change, or are they yet another case of middle class do-gooders tinkering around the edges? You will of course find the ubiquitous canvas bags in there – ‘Porty Shoppers’ they’re known as in the Portobello district of Edinburgh, one of the places campaigning to stamp out plastic bags. And Transition Bristol’s session on ’emotional composting’ (turning negative to positive energy) is a fairly liberal interpretation of the transition brief. But some of the thinking and debates are pretty far reaching. In Ashburton, Devon, they’ve set out a time line that starts with simple plans to open the library more often, and ends with a vision of giving over most of the land around the town to food and medicine by 2015.

Ten miles down the road in Totnes, the country’s first Transition Town, they’re aiming to bolster local trade by introducing their own currency, the Totnes Pound. Designed to be spent in local businesses, it has the same cash value as a pound sterling and is legally backed by an equivalent in official currency, so traders and customers are confident the notes have a real value. After an initial print run of 300, there are now 7,500 in circulation and some pretty hefty transactions have taken place; one optician accepted a £200 payment in full for a pair of glasses. If the New Economics Foundation is right that every £1 spent in an area is worth £1.76 to the local economy, Totnes Pounds are preventing a fair bit of economic ‘leakage’ – give or take the few notes that Hopkins discovered for sale on eBay as collectors’ items.

Beyond the safe havens of the market towns that feature heavily in the network, could the model ever be rolled out in big urban environments, where you might not find the same community spirit? Hopkins concedes that “the first wave of places were the ones you’d expect”. “Laboratories,” he calls them, “where ideas get tested”. But he adds that all kinds of communities are now involved – Leicester, Coventry, South Liverpool… “It’s a whole new challenge to see if the idea translates to the city scale,” he says. The network is planning a conference to discuss the issue in November, but his hunch is that the way to tap into cities is to break them down into ‘villages’ – such as Brixton, the first London borough to sign up.

“One optician accepted a £200 payment in full, in Totnes Pounds, for a pair of glasses”

With an ethnically diverse and highly transient population, it could hardly be more removed from Devon, yet the group is planning to introduce its equivalent of the Totnes Pound, the ‘Brixton Brick’, which takes its name from the borough’s much older LETS scheme. The team is also getting urban vegetable growing off the ground – quite literally; rooftops as well as estates are on the list of possible scraps of land for the ABUNDANCE Project (aka Activating Barren Urban Niches for Daring Agricultural Networks of Creativity and Endeavour).

If names like these sound very new age, Transition Towns Brixton’s involvement with Lambeth Council proves they’re nothing of the sort. It was their input into a long-term development plan for the borough which pushed the council to commit to implementing zero-carbon technologies wherever possible, according to volunteer Duncan Law. “Before we got involved, adapting to a low-energy future didn’t figure anywhere in the plan,” he says. “But after we sat down with the council, we helped them see that the coming energy crisis could be an opportunity for them to lead on low-energy solutions.”

The Transition network has had a handful of coups at the local political level: an inspired city councillor who persuaded his peers to pass a resolution recognising the problem of peak oil and supporting Edinburgh’s burgeoning Transition movement; the Transition Forest of Dean invited by the regional development agency to work together with the Local Strategic Partnership… It’s exactly what was intended in step number 9: “Build a bridge to local government”. Hopkins believes the model could even be extended to create ‘Transition Local Authorities’. “We’re often contacted by them, saying ‘how can we make this a Transition area?’ and so far we’ve have to explain that the push comes from the community.” Over the coming year, the network will be looking at expanding to include universities and businesses as well.

Hopkins talks proudly of the first Transition ‘training for trainers’, which is creating a growing pyramid of evangelists. Regional groups are also self-seeding around the country, keeping in line with the idea that leaders in the movement should “Let it go where it wants to go”. He emphasises that there are no fixed ideas about how the network should work: “It’s an active learning process – and everyone involved is contributing.”

It’s encouraging to hear the concept mentioned on The Archers, in Clare Short’s speeches, and plugged by Jonathon Porritt, Forum for the Future’s founder director, who says it’s “one of the most positive things going on out there today – and already playing an important role in transforming both people’s attitudes and behaviour”. But what would success look like? When pushed to lay his cards on the table, Hopkins comes up with three criteria: a visible influence on the political system; reduced carbon; and increased resilience. Translated into real life, that could mean localisation enshrined at the heart of policy-making in five or ten years’ time. Or, in 2020, being on track to hit the government’s target of reducing emissions by a third. Or even a scenario in which it’s too expensive for supermarkets to stock their shelves with imported goods, but a strong regional infrastructure helps fill the gaps with local produce.

Those within the movement aren’t keen to predict how it will look over the next decade or so. There’s a general recognition that they’re entering new territory, seeing what works and what doesn’t, and collectively finding a way forward. James Samuel, a Transition activist on Waiheke Island, New Zealand, puts it nicely: “It may be that Transition Towns are like the first weeds that push up through the concrete, opening a crack for something much bigger to follow through in its wake.”