« Learning to Live with Solar Panels
More Transition Stirrings: the early days of Transition in Flanders »

The Stirrings of Transition Los Angeles… 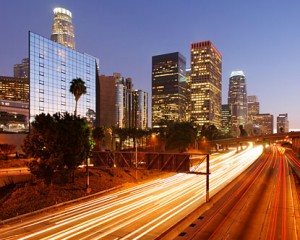 Here is an email I received from Joanne Poyourow in LA about the early steps that are being taken to kick start Transition ideas in the city.  Hope this is interesting/encouraging for other Transition city groups.  Just to remind you, the Transition Cities Conference takes place in Nottingham on the 27th – 28th November.  Full details to follow next week, but do put those dates in your diary.

“Sometimes the question of “what to do about Los Angeles” seems just too big — both to those on the outside looking in, and even at times to the brave Permaculturists and Transitioners who are here working from the inside.  Los Angeles is huge.  The city grew with the age of the automobile, and what were once small towns scattered here and there, gradually filled in with sprawl.  At this point, the “Los Angeles Basin” (or even the majority of Southern California) is one continuous area, where borderlines between small cities merge one into the next, with city lines often only distinguishable because the color of the street signs changed.  City census information lists the Los Angeles metropolitan area at approximately 3.8 million people.  Some estimates say the broader Los Angeles County numbers 10 million people.  It would be easy to give up, and say “it’s too big.”  But this is where we live, and change has to begin at home.

Indeed, when I got a hold of your Transition Handbook, I thought “wow, I’d like to be part of something like that!”  I looked around the internet to find someone who was doing it, so that I could attend their events.  But there were no Transition events here to attend.  It seemed that instead of waiting for someone else to create an event, we had to just do it ourselves.  So this September, here in the middle of Los Angeles — in the middle of the car culture — we bravely offered a series we called “Life After Oil.”  If I recall correctly, we stole the name off one of the fliers in the Transition Handbook.

For our first event, we held a screening of “The End of Suburbia,” together with a community discussion.  We used the Think and Listen exercises right out of the Handbook, and the Post It exercise too.  We had a good crowd of local faces for that event.

A week later, on September 20, we held a full-day session to showcase the Transition ideas.  For this event, we had 46 people attending. A large group came from Santa Barbara (96 miles north of us). One came from Paso Robles (218 miles north) and another from Templeton (216 miles north). Two came from Frazier Park (67 miles inland from us), One from Laguna Beach (56 miles south of us). A group of 5 came from the San Fernando Valley (20 miles north). The rest were from various parts of our extended L.A. basin. From the start of the session, we emphasised that the event was in fact a regional gathering, and to appreciate that and make the most of the opportunity.

It was so wonderful to get all these people together.  At the start of the day, as I stood before the crowd, I could feel the energy and excitement buzzing in the room.  Each one of us dreams of having a Transition Initiative in our own local neighborhood.  Each one of us had looked at the enormity of the “problem of L.A.” and found it daunting — too big to do alone.  But together in one room, we realized that we have lots of help, lots of people with whom to get this started.  We have all the people who attended, and all the people from those neighborhoods who didn’t make the drive that day.  All the people who had scheduling conflicts so couldn’t make that particular session.  It adds up to a whole lot of people, all holding the common vision of Transitioning Los Angeles into a post-oil future.

Through the course of our day, we used many of the exercises outlined in your Handbook.  We did a “peak oil self-teach” like page 27 of the Handbook (our slides are online here).  To introduce the Transition concept, we used your YouTube tapes for the I.F.G. conference. After that, we read your letter to LA.  One of the women told me later that we should have handed out tissues — it was very moving to the participants to hear your voice and your humor on the tape, and it really touched people to have you speak directly to LA through the letter.  It was as if you were in the room with us.  When you open the IFG YouTube tape you mention why you weren’t attending the Washington conference, the no-fly pledge — that too made an impact on people here in LA.  And your exercises work really well, even when used straight out of the book!  Thank you so much for “joining” us here in LA at our event.  Your ideas are really making a difference.

At the end of the day, we held working sessions so the people from similar geography could gather to process the information of the day, and begin thinking toward developing their local resource picture.  And as a closing ceremony, we planted a tangerine tree together in our little community garden.

Our local circle — the Environmental Change-Makers, who hosted all of the above — has been meeting for nearly 3 years.  We’ve been doing a slow but steady process of awareness raising and offering reskilling classes.  We were asked to write a book about our little group; Environmental Change-Making should be out in about a month.  It tells the story of how we got our community ready for Transition ideas.  As I’ve told many people, a community doesn’t go from outrageously unsustainable consumerism into being a Transition Town overnight — our book tells the “getting ready” story.  Perhaps it could be called a prequel to the Transition Handbook — at least it served that way for our little neighborhood.

Here in the Southern California / Greater Los Angeles area, we’re continuing our dialog online through emails, and looking forward to our “official” Transition training in December when Naresh Giangrande and Sophy Banks will be here from the UK.  We’re also beginning to connect with other cities in the U.S. through the new Transition United States site  For people who’d like to hold events like ours, our agendas and most of our resources are online here.

What a moving account of the birthing of the Los Angeles transition.(I like the word birthing as opposed to kick starting -words have power 🙂 This movement seems to have an inclusive, compassionate energy that people respond to. Maybe its something to do with having its roots in a permaculture type process which reflects an intrinsic natural pattern which resonates at a cellular level. Wow! Bit deep for a Thursday morning,better get me some rooibos tea, Paula x

Inspiring stuff! I shan’t fret so much over getting the message out there to our population in Bristol of 400,000 any more!

That is incredible – what a positive sign! If you can get a Transition happening in LA then none of us have any excuse for feeling daunted by the size of our cities and their challenges!

Flying into Los Angeles at dusk is like something out of Bladerunner, and it can seem daunting. But then – cities bring together far, far more expertise than you can muster in a small town. Given that so much of LA is given over to car culture, then films like the death of subburbia resonate more than they do with more compact, walkable cities like mine, Liverpool, with good (if rather expensive and privatised) public transportation, lots of space given over to allotments and parks, and a smashing river. Putting in the water supply system that LA did in the past is exactly the sort of re-engineering we need now. Any my experience is the ‘can do’ attitude you so ofte get in communities, especially in the states, is just what we need now.

another thought – what about a twinning process – twinning transitioning cities to pass on ideas, support each other, perhaps have cjhats by skype.

Anyone transitioning New York City, where liners from my city once landed?

I did a talk about the history of Transition Town Westcliff at Los Angeles Eco Village when I was over there a few weeks ago, as well as a shorter version as part of the Permaculture course I was co-teaching out there – there’s a posting on our blog about it here http://westclifftransition.wordpress.com/2008/09/12/californian-connections/

Last post seemed to get lost, so apologies if this appears twice…

I did a slideshow about the history of transition town westcliff when I was over in LA a few weeks back, both as part of the permaculture course I was running over there and at LA Ecovillage. There’s a write up on our blog here http://westclifftransition.wordpress.com/2008/09/12/californian-connections/

My friend Willam from the Ars Terra project is ‘mulling’ about starting up Transition Town Palmdale, maybe they will be ‘twinned’ with Westcliff??

Pete, I like your idea about twinning Transition Cities.
Maybe its something that be applied even more generally – as one Transition Town/City finds its feet it lends its expertise to one that is just starting, helping to accelerate the process. I’m thinking somethign beyond the initial training – sending out “newly-formed” experts in local health, energy, food etc.

(this may already be happening – pardon my ignorance)

Rob, I read your post about Transition LA with a tear in my eye. I grew up in the San Fernando Valley-part of the LA Basin, and now live in the UK. One of their positives, compared with the UK, is the amount of land around most houses and buildings, and the amount of sunlight at that latitude available for growing food. If our LA Transition friends can develop and learn to grow wild food plants and medicines in their backyards and front gardens from earlier native tribal wisdom about the native plants of the desert, perhaps this will help them in the arid landscape of Southern California. I wish I were there to take part–but maybe my childhood friends will choose to. In the meantime, it’s great to be a part of the transition here in Lancaster.

[…] this week, including: • what it’s like living with solar panels • the beginnings of Transition City Los Angeles, and • how to get involved with making the Transition […]

I thought they already found the solution to the problem “what to do about LA” back in the 80s – move to Oregon.

As Bill Bryson said about LA, “I think it’s fine that crazy people should have their own city, but I see no reason why sane people should want to visit it.”