Learning to Live with Solar Panels

The title of this post makes solar panels sound a bit like some unfortunate ailment, but moving from the instant hot water world to the solar world is definitely a process of learning a new way of doing things.  It is now nearly a month now since our solar hot water system was installed by Sungift Solar of Exeter, as part of the Transition Town Totnes Solar Heater Challenge scheme.  We went for flat bed panels, not for evacuated tubes, and the installation took a couple of days and was pretty painless.  So now we rely on the sun for hot water, and our gas boiler sits looking slightly put out, its role now reduced to topping up the tank when requested (you can almost here it mumbling, grumbling about “the good old days”…).  Although it has taken a bit of getting used to, I think having solar panels is quite wonderful.

In our hallway, which was always a fairly dull place you just passed through to get to other places, there is now a digital box which gives you certain key bits of information, and makes it a fascinating place to spend some time.  It tells you the temperature in the panels, the temperature at the bottom of the tank, the temperature at the top of the tank, and how many hours of collecting heat from the sun we have had since the system was installed so far (172 so far, and counting…).  It has now become the first thing that I do when I get home to check how much solar heat has been harvested in my absence.  On a good sunny day it gets up to over 60 degrees, but on a cloudy day it doesn’t get much above 35 degrees.

One of the first things that has been useful for me has been getting my head round what those temperatures actually mean, being a fairly innumerate kinda guy.  Anything under 45 is a pretty tepid shower, and over 60 is the kind of bath that hurts to get into (the kind I like but which are a pretty rare occurance nowadays).  My teenage sons have become rather keen on spending hours lolling in hot baths, seeing showers as a fairly poor substitute.  Now when the question comes “Dad, can I have a bath?”, my reply is now “I have no idea, check the box”. I haven’t yet told them that if there isn’t enough from the sun I can still top it up with the gas… we’ll just leave that piece of information out for now I think…. 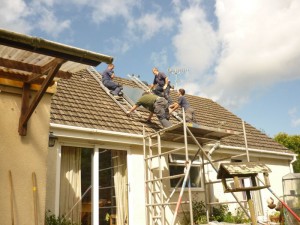 Our longer term idea, as finances permit, is to add a woodstove (installers of which are apparently run off their feet at the moment, such is the number of people installing woodstoves as fuel prices rise), which will have a backboiler to heat the water in the tank.  What I like about having solar panels (especially when you try, as we are doing, to not use the gas as a top up, using hot water when we have it and doing without when we don’t) is that it is one of those self-imposed restrictions which actually makes life far more interesting, connected and satisfying.  I am coming to feel more in tune with what the weather is doing, more connected to the seasons and the world around me (in much the same way that having a garden does).

I have found, since having them installed, that I have entered the extraordinary community of people with solar panels.  I meet the kind of people who have kept Excel spreadsheets of the performance of their panels every day since they were installed, and can regale you with stories of the sunniest day of ’06 and so on.  It is a fascinating community of people who have fallen in love with this most simple and efficient of technologies.  We had hummed and ha’d for months about installing them, but now they are up I wonder how we ever lived without them.  If you are thinking of installing some yourself, as they say, come on in, the water’s lovely (well, at least it is when the sun’s been shining…).

You can read the account of another TTT Solar Challenge person here, which is great, but not as good as what Transition Town Lewes and the Ouse Valley Energy Services Company are doing, installing solar panels with funding from Lewes District Council which means that for people on benefits the installations can actually be free (our local Council wasn’t interested).  You might also enjoy a fascinating, if somewhat worrying, story from the US which will give me a few sleepless nights listening for the sound of solar panel thiefs crawling across the slates…. .  Also, Sami Grover over at TreeHugger just had solar panels installed, a similar kind of experience….

Hi Rob, we did things the other way round, put in the wood burning rayburn with back boiler first (about a year ago), with the intention of adding solar panels this year. We were going to get the same person (Scarlett fireplaces, who are TT Westcliff supporters http://westclifftransition.wordpress.com/2008/07/21/wood-fuel-for-a-low-energy-future/ ) to fit the panels, but as you say, he’s been rushed off his feet installing woodburners since the summer and hasn’t had time!

Nice article and I know exactly what you’re talking about as we’ve had our system in for two years now. I’m very familiar with the panel displaying temperature and have even spent hours recording what’s happening on a minute by minute basis to work out if it’s configured correctly. I should say that our system is more complicated than most as we have two tanks in series to maximise the amount we collect with the gas boiler topping up the primary as required (and yes, I kept that secret from the kids for as long as I could).

One point I’d encourage people to consider carefully is the length of the run from the collector to the tanks, and indeed from the tank to the points of use. Our collector is on the roof but our tanks are in the cellar leading to large runs and lots of dead water cooling down when the pump stops. We also had a problem when the initial installation didn’t have non-return valves and we ended up exporting by convection our carefully collected heat from the tank back out through the collector overnight!

By the way, if you think you’re getting obsessed by numbers and meters with solar collectors, just wait until you put the solar pv in and start watching generator, export and import meters for electricity, then how they are affected by different appliances and how sunny it is…

Ha! Ha! – I had to laugh Rob when you mentioned the Excel spreadsheets. Mine was more a table hastily scrawled together on a piece of paper, but sure enough figures were written down, the weather on that particular day – and anyone who stayed in the house while I was away was instructed on how to keep the table filled in!

Hi Rob, is there a reason why you avoured flat panels over evacuated tubes? Our friends who live around the corner from us have the latter http://www.flickr.com/photos/transitionwestcliff/2171036507/in/set-72157603645168948/ and say they are very good, but obviously the more information we have from ‘real users’ the better informed we will be when it comes to making our own choice (if our installer ever gets time away from fitting wood burners…)

We’re just about to order a wood burning stove from the manufacturers and we’re informed theres a sixteen week waiting list. Should be in by spring then!! At least we wont have to worry about running out of wood this winter!

I have a solar boiler installed some years ago. This hot water is off course used in the kitchen – you don’t need use a much gas/electricity to boil water anymore – and the bathroom. As mentioned in this blog I wondered if we couldn’t use it for other appliances like the washing machine and the dish washer. They use a lot of electricity in order to get the water at the right temperature.
We have a device now that enables you to fill hot water from the sun boiler into the washing machine

[…] about the silliness of talking about payback times. Now Rob has written a follow up post about his own experiences with solar water heating in which he reveals that he is taking his solar exploits a little further, in that rather than […]

[…] website has carried a number of interesting articles this week, including: • what it’s like living with solar panels • the beginnings of Transition City Los Angeles, and • how to get involved with making the […]

Hot fill dish- and clothes-washing machines are not generally available, so it appears at first sight that those of us with solar water heating are missing a trick because we are using electricity to heat the water inside the machines.
BUT – a simple experiment shows that this is probably sensible for the great majority of installations. Using the hot tap nearest the dish washer or washing machine, run off into a bucket enough water that would approximately fill the machine. (for modern machines, that will be quite a small amount – you can probably find the data in the machine’s manual). You’ll find that the water in the bucket is lukewarm at best. It’s full of the standing cold water in the pipe run from your hot water cylinder, with a bit of hot (maybe), whereas that long pipe is now full of hot water and will lose its heat in a few minutes.
Most of the work your solar panel has done is being wasted – granted some of it will reduce the electrical power consumed by the dishwasher, but it’s unlikely to be much. Largely it is heating your house through your hot water pipework.
And of course if you are washing your clothes at 30 degrees, the power consumption for water heating is not a great portion of the total.
With dishwashers, a lot of the electrical consumption is due to the drying cycle, and you can make big savings by choosing a cycle without drying if available, or by switching the machine off when it has finished the final rinse.
Probably of less significance but worth pointing out is that modern clothes washing detergents are apparently optimised for use in water that starts cold and is heated, rather than being dissolved in hot straight away.

As far as learning to live with solar panels is concerned, there’s a very interesting report from BRE and Viridian at http://www.viridiansolar.co.uk/News%20Articles/2008/08_06_Viridian_Announces_Monitoring_results.htm
It demonstrates that people who take the trouble to adapt their use of hot water to when it’s available, make significantly greater savings than people who don’t bother to understand how the system works.

I know it’s rude to ask these things Rob, but how much did your system cost?
Mandy

More discussion of flat panels vs evacuated tubes here http://www.itsnoteasybeinggreen.org/forum/viewtopic.php?t=15662
I’d still be interested in why you (Rob) went for flat tubes rather than evacuated tubes as my potentail installer is coming round for a chat about it next Tuesday, so would prefer to be as informed as possible before then! cheers Graham

I’m glad you’re pleased with your panels. Evacuated tubes are more efficient though. Flat plate collectors only provide a useful amount of heat during the summer months in somewhere like the UK. Vacuum tube collectors on the Evacuated tube panels will provide useful heat year round as long as the sun is shining. They can even produce heat in overcast weather.

But watch out for the sharks…
http://www.itsnoteasybeinggreen.org/forum/viewtopic.php?t=15325&postdays=0&postorder=asc&start=0