« The Transitioning of Second Life: by Katy Duke
Some photos from the Transition Cities conference… »

The first day of the Transition Cities Conference in Nottingham was a fascinating coming together of nearly 150 people from across the UK (as well as Sydney, Melbourne, Paris and Gent in Belgium), all hosted in the Nottingham Arena, supported by Nottingham City Council.  A few of us drove up from Totnes, leaving at 5am, and delays caused by an accident involving a huge Tic Tac lorry, meant we arrived with 10 minutes to spare before the start at 10am.

After a short introduction from me which set the conference in the context of Transition’s iterative approach, constantly redefining and reinventing itself in the light of the experience of those on the ground doing it, Katrina Bull, portfolio holder for Environment and Climate Change, welcomed, on behalf of the Council, the conference to Nottingham.  Then Steve Shaw from the Sustainable Communities Act gave a short overview of the act and on its potential usefulness for Transition groups.

This then led into a session where those attending were invited to organise themselves as ‘maps’, firstly showing the geographical distribution of those attending (a good spread across England, scant from Scotland, and a complete lack of Welsh initiatives, with good showings from Nottingham, unsurprisingly, and London), and then showing the spread of ages, the gender mix, and then the degree of optimism people felt that cities could actually be Transitioned. Paul Paine, who positioned himself at the extreme of the non-optimist end, summed up his perspective thus “we’ve got to try anyway, and it’ll be glorious, even if we fail”! 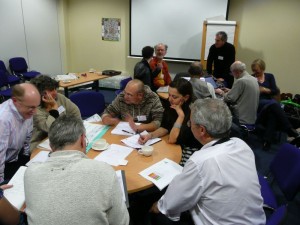 After a tea break, the Open Space process was explained, and the first session was underway.  The notes from these sessions are being feverishly typed up as I speak, and should be online by Monday.  Discussion was deep and rich, and some fascinating ideas emerged.  Then, after lunch, the first workshops.  There were workshops on the Sustainable Communities Act, working with your local authority, working with conflict (which one participant in the closing circle at the end of the day described as ‘mind blowing’) and one I was part of on Energy Descent Plans (which is therefore the only one I can tell you anything about). 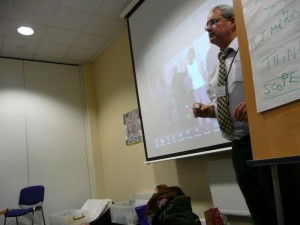 I introduced the idea and the thinking so far, and made clear that they are a work in progress, that no-one yet knows for sure how to do them, but that we are all making it up as we go along.  I talked about the Totnes EDAP work so far and some of the tools we have been developing.  Then John Green from Transition Nottingham talked about a process they had found very useful, based on K.J.Method, or Affinity, a way of creating, from brainstorms, maps for the future direction of an initiative. Finally Lucy Neal from Transition Tooting spoke about the wonderful ‘Creating an EDAP in 2 hours’ activity she developed with Duncan Law, the film of which will soon be on YouTube.

After another break, we were into the final session of Open Space for the day, which was again, fascinating.  I sat in on sessions about where, when and how to hold Unleashings, legal and constitutional structures for Transition Initiatives and one on the global context of Transition work.  Then, after a final go round and check in, we drew to a close, in order to refresh and prepare for this evening’s social at the Canalhouse.

There will be some short films of the conference produced which should be on YouTube soon, and the notes from each of the Open Space session should be online by early next week, and will appear here.

Hi Rob – I’m sorry that I and the rest of the Welsh transitioners didn’t turn up! Sounds like a great conference and hopefully we’ll be there in force next year – or maybe we should even hold a Welsh transition conference. Keep up the great blog, Rich

I’m curious about the end dynamic. What percentage of participants attended the evening social? How late did it run?

I’m guessing a lot, and late; sounds like a great group.

Very stimulating and enjoyable gathering, fantastic group of sorted people, I was never bored. For me at any rate the discussion raised more questions and more possibilities than it provided answers. I only hope that Transition can and will do more to explore the 21stC “landscape” and facilitate our journey through it without getting us all bogged down in the swamp that is structure, organisation, constitution, hierarchy, power. Thanks to everyone who put the event on and took part.

I think someone else must have been pretending to be me!!
Like Bob the conference has raised loads of questions and Im looking forward to seeing the notes from the workshops and sessions that I didn’t get to.
And we were all very sensible and well behaved at the social Granpa!!
On behalf of Transition Nottingham, thanks to everyone who came and made it such a useful couple of days