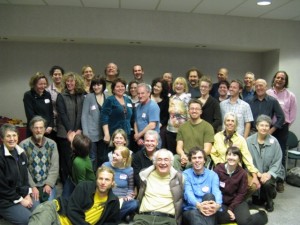 The most controversial part of the course remains the inner worlds talk – linking the personal psyche with the shape of the society we have created and naming some of the patterns that arise from what is generally unconscious for people in Industrial Growth cultures. We use a model adapted from psychosynthesis, which describes both painful wounding experiences and the healthy potential states whose loss the wounds relate to as being kept out of consciousness to some extent for most individuals in our culture. The place we operate from is a place of learnt adaptation to the world around us – particularly the world of our early childhood where our first experiences of the world, of other, and of life create lasting impressions and shape our worldview.

This model use gives elegant and far reaching explanations of some of the insanity that our society creates, such as that expression of authentic feeling are taboo in many situations, that raising children has less value than making money, and all of our institutions that have a responsibility for the truth have at least one paramount reason for distorting it.

It explains the particular addictive or dysfunctional patterns we collectively engage in – pursuit of excessive wealth, longevity, entertainment, romance, sex, work and reality altering substances. It explains why we make films about future disasters, machines taking over the world, horror movies and romance but not a single film about a positive, earth based, socially just and spiritually grounded human future. And it warns of what can happen in environmental projects if the power of the unconscious – both positive and negative – is not understood and worked with. So for now the talk stays in, until someone comes up with a better idea!

The inner worlds presentation got a good going over with the Training for Trainers group, as well as useful suggestions on how to deliver it. An interesting corollary of understanding what is out of consciousness at a personal level is to look at the collective unconscious – and following the model we use, including both the painful wounding from past and present, and the potential for true healthy being. The avoidance of engaging with healthy potential is part of what stops us from making films and telling stories about the positive future we could create; it keeps positive information and images from featuring in our news programmes and newspapers.

And avoiding the wounding means for example the continuing difficulty of telling the full truth of the violence in which America is founded – first towards the Native Americans, and then of Africans forced into slavery. Transition is very good at addressing the former, with positive visioning so core to the model. And we need to make sure we keep creating safe spaces for the difficult feelings, whether relating to personal or collective issues.

Here in New Zealand someone asked me if we had looked into what helps addicts recover when their fix is withdrawn suddenly – one way of viewing economic collapse and the absence of money, resulting in a quick end to consumer / work / external status driven fixes. The opportunity that such a crisis forces on the addict is to start to feel the pain which initially drives the addiction, and then start to recover some of the positives which the addiction keeps out of reach. The risk is that the addict will immediately reach for some other fix – or become increasingly desperate and potentially violent in their determination to restore the fix as it was, believing that their life does indeed depend absolutely on that. So a useful thing for Transition projects to be thinking about is how we can create support structures which catch people as they fall out of their old patterns. I have heard of a real application of the 12 step process to consumer related addiction, and would be interested to explore this idea more.

I am fascinated that the three countries that we will spend most time in are all ex-colonies of England; mainly because they are now English speaking, and so have picked up the model. But also they are “developed” – so India and ex-colonial African countries have not picked the model up – and therefore share some aspects of culture, psyche and relative global wealth.

As a practical hands-on engineer, the inner worlds part was the most important part of the training to me… Portland training (from Seattle)

Thank You! so much Sophy and Naresh!

As a therapist trained in Psychosynthesis, and a TT-inclined human being, I’d be interested to know in more detail about your creative synthesis of the two models/threads… sounds like very useful work.

I was very interested to see this post as I have of late been thinking about Transition and what hurdles we will have to overcome by regaining our ability to think clearly without the influence of patterns.

My I offer that a Worldwide organization I am a member of has some very good thinking on this matter of patterns, hurts, and some tools to regain ones ability to think in the present. It is called Co-Counseling or Re-evaluation Counseling and can be found at rc.org. I now that they have representative sin the UK, so if you like I can find one for you also.

I hope this may be of some help in your work. Thanks for the work you are doing.

I hope psychosynthesis includes some concentration and how we can hold pain in our bodies and how this can be addressed in terms of addiction and transition.There seem to be so many psychological approaches that miss out the body and concentrate purely on ‘thought’. We are made up of more than ‘thought’.
I personally use the PRH method of personal growth which has at its centre a positive vision of how you want to be as an individual and helps you work towards that, by focusing on the pivotal centres that the person is made up of, which can be described as body, mind/’I’/ego, spirit/being, sensibility/emotions and the material and human environment which surrounds us. I see it as akin to the transition model. I would like to know more about the inner worlds talk if possible.

As a therapist with a bit of psychosynthesis training and recent training in Process Work (and other body-based systems), I’m pretty interested in how this inner worlds talk goes and in sharing it widely. Can you tell me more?

I’d be interested to learn more about the model you have developed.

Also I’m not sure that I understand the point that is being made in the final paragraph.

So, does your model also explain why I can’t yet watch Transition Training videos! 😛

Be a really useful tool. It is in the pipeline?