Transition Appears on Inside Out East Midlands 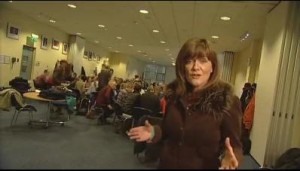 Here is a link to a rather good piece that appeared last week on BBC East Midlands, called ‘Energy Transitions’, with the subtitle “A look at how the East Midlands’ towns and cities are dealing with future energy issues”.  It features some film done at the Cities Conference, as well as a look at the work of some of the local groups there.  I particularly love the way she explains peak oil by walking over a bridge, very nice.  Here is how they describe the programme on the Inside Out website;

The rise and rise of energy prices has been hitting all of us. Even though petrol prices have fallen in recent months, the long term trend is ever upwards. And what happens when our supply of fossil fuels can’t meet demand?Everyone’s feeling the pinch at home, in the supermarket, and in business. Even local government is struggling to meet its energy bills.

But, one group of people think they have a way forward – a blueprint to tackle the twin challenges of climate change and “peak oil”. It’s called the Transition Network – and already Nottingham, Leicester and Market Harborough have joined more than 120 towns across the UK to sign up. The transition network is a grassroots movement which aims to take us all back to basics.

Transition at the grass roots

The founder of the transition movement is Rob Hopkins. His idea is that communities across the globe need to gear up for a profound shift in the way they operate because of dwindling supplies of cheap oil and increasing concern about carbon emissions.

The “transition” – as he sees it – will be from high energy lifestyles which are totally reliant on fossil fuels and very vulnerable to supply shocks, to more local, sustainable, low carbon and above all resilient clusters of population. In contrast to those doomsayers who warn of bleak times ahead, “transitioners” are keen to stress their positive vision of the future.

They believe more emphasis on local food, skill sharing, cycling and even community energy schemes could reduce bills and bring communities back to life.

Critics point out the transition network struggles to reflect diverse communities and its grassroots nature means it tends to be disorganised and rely on well meaning volunteers. But the movement has already won the support of Nottingham City Council and Leicestershire County Council. They see a community based response to climate change as essential if they are to meet their new targets to curb emissions.

Leicestershire County Council have voted unanimously to support their transition towns. And Nottingham City Council became the first city to pass a “peak oil motion” in December 2008 committing councillors to taking a future of expensive oil into account in their planning and policy.

Let’s not get distracted by the work of proving that Transition DOES reflect diverse communities and that its grassroots nature ISN’T disorganised.
Let’s just get on with the real work…
One “well meaning volunteer” is worth a ton of chattering critics!

Fantastic – people with bike trailers cycling to the sound ‘Jigsaw Falling into Place’ by Radiohead on the BBC. There is hope!

The big problem is that these transition communities will do better then other commnunties when the real energy problems start……..for a while. They will then be flooded by people who want to come in to them but really can not part with the old lifestyle. These people will wreck it. Lets face it, the vast majority of people are just not going to accept the reality that the lifestyle they have practiced is over. Take a look at the movie Mad Max 2. The people in the compound with the oil rigs refining fuel have a plan to leave the wasteland and start up a new life elsewhere…….they want to use the relics and remains of the old world to salvage to use to create a new life. The people on the outside of the compound are hell bent on raiding and taking over the compound to get their hands on the infrastructure and fuel stores so they can continue to run their fuel hungry vehicals and continue searching the landscape for more things to consume, stealing, killing, raping as they go, consuming whatever is left of the resources of the old world to keep there doomed and pathetic way of life going for a bit longer, without a plan for what comes after there is no more accept to keep living like a parasite on the corpse of the old world. This is reflective of most people.

Stu
You’re warning is dark, but I suspect it echoes the fears of many working for transition. I share your concern, if not so graphically.
Totnes poet and Transition jester Matt Harvey referred to ‘rough people’ taking our hard-grown organic veg and us having little to defend ourselves with beyond assertiveness skills!
This is an important discussion that I hope Transition Heart and Soul groups are tackling, but where else can we go with it?
Transition is for everyone right?
The sooner we share it as a realistic and, by anyone’s logic, an irrefutable way forward (but not in a dogmatic way), the better.
I reckon kids can see it, even if their ‘carbon-dated’ elders can’t.
Let’s not let our fear create our reality…

This is a really good programme: but a challenge *has* to be to give the media the confidence in the future to not have to always mention the War and The Good Life in the same breath as transition. Because this ends up positioning it all as somewhere between Future Shock and nostalgia.