« Transition Appears on Inside Out East Midlands
Transition Movie Blog 5 » 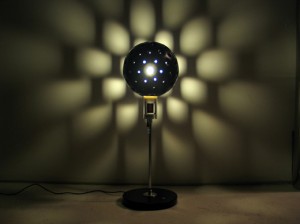 With investment in research and development for renewables plummeting, and the much-hyped hydrogen economy in the doldrums, its about time we had a new improbable and unfeasible energy source to get excited about.  I am an avid collector of such stories, from the termite gut enzyme powered cars to the mining of the moon for Helium 3.  I was delighted to read, therefore, about the dead fly powered lamps soon to be all the rage, apparently.

It works, according to a piece I read in Metro, in the same way as a venus fly trap.  The lamp is designed so as to attract flies to it, which it then traps (‘cunningly’ according to Metro, whatever that means).  The dead flies are fed into a “microbial fuel cell” (I swear these people make these things up just to confuse me) which generates the power to power the lamp which will then go on to attract more flies, and so on and so on, like some gory perpetual energy nightmare.

This macabre device, which sounds more like something out of the novels of Angela Carter, has been brought to you by designers James Auger, Jimmy Loizeau and Aleksandar Zivanovic.  These guys are also inventors of, among other essential household appliances, a robotic table which catches mice (see right).  How I’ve longed for one of those.  Gives terrifying visions of being chased around the kitchen by a table which has decided that mice are no longer adequately satiating, and that you look far tastier.

I remember, about 15 years ago, going into a department store in Bristol (anyone remember ‘Dingles’?  The land that taste forgot) and asking the saleswomen in the clock department if they had solar powered alarm clocks, a question which was greeted with great hilarity.  “How’s that going to work then?” one of them asked between giggling fits, as her colleagues gathered around to listen to this ridiculous man’s absurd suggestion.

“It’ll stop working at night… and then how’s it supposed to wake you up in the morning!!”  They all fell about as I left the shop, moderately humiliated, but resolute in my belief that such a thing really did exist, just I didn’t know where to get one from.  Unlike my solar alarm clock, now a fully functioning, widely available reality (unlike Dingles which closed down a few years ago), this has one key, and it would appear to me fatal, flaw.

In my house, I only really get flies in the summer.  Since around October, I don’t think I’ve ever seen one.  These are the months when one really needs light the most, what with the days being shorter and everything.  A fly-powered lamp really isn’t especially practical.  Whereas my solar powered alarm clock only needed to store energy overnight, a job most batteries are up to, it is the need for this clock to store its dead fly extracted power over entire seasons that puts it beyond the realms of the feasible for me.

Perhaps in an energy descent future we will be reduced, in order to keep our houses illuminated, to hunting for small mammals to feed to our home lighting systems, or maybe roadkill would suffice.  As more and more of these unfeasible inventions, which usually fly in the face of practicality come and go, we are left to conclude that Ted Trainer was right, that the technologies that will get us through the next 20 years are all already here, we just need to accept their limitations and get on with it.

it is the need for this clock to store its dead fly extracted power over entire seasons that puts it beyond the realms of the feasible for me.

All you need to do is leave on all those fluorescent lights with clear plastic enclosures (you know, like kitchen, garage or porch lights) at night, all the summer long, and then in the autumn, you can open them up, harvest all the dead flies, and pop a spoonful a day into the lamp and…

…hmmm. There’s something wrong there.

And what happens when we reach peak flies?? 😉

reminds me of the Yes Men Vivoleum stunt – did you hear of that? where they posed as Exxon & National Petroleum Council reps and presented to an audience of 20,000 a new product, ‘Vivoleum’… made from human remains.

“Without oil we could no longer produce or transport food, and most of humanity would starve. That would be a tragedy, but at least all those bodies could be turned into fuel for the rest of us.”

“We’re not talking about killing anyone,” added the “NPC rep.” “We’re talking about using them after nature has done the hard work. After all, 150,000 people already die from climate-change related effects every year. That’s only going to go up – maybe way, way up. Will it all go to waste? That would be cruel.”

ewwll….I don’t think i like the sound of that!! lol

as difficult to put into practice as the chicken coop greenhouse.

If you can use dead flies – how far a stretch is it to use dust bunnies, tracked mud, or tree twigs/dead leaves? Or maybe hairballs from drains, dryer lint, shed hair from pets and livestock, or dead houseplant leaves and debris?

Does this mean with a mere switch of microorganism, we can now power our workshop from the compost heap, or at least post a mirror or two, and turn off the electric-driven yard light?

I know this is a easy target for snarky remarks But, if you live in a tropical place, as I do this gadget seems just the thing. If they could adapt it to attract and digest mosquitos the device would be a godsend in the Caribbean, Africa, South American and Southeast Asia and certainly on my terrace any evening. I hope these guys get this thing together. Think it would certainly help in malarial areas and places plagues with Dengue fever.