« Classic Book Review: How to Grow More Vegetables Than You Ever Thought Possible (etc. etc.)
‘Getting to Zero’.. today’s Afternoon Play »

Learning the Lessons of Coin Street

A couple of weeks ago I was in London, and I visited Coin Street Community Builders (CSCB) on the South Bank. CSCB are a fascinating initiative, one that can teach a great deal to Transition Initiatives. For me, a Transition initiative, once it has created its EDAP, needs to morph, and become in effect, a relocalisation agency, a developer, a housing association, a bank. CSCB have done many of these things, and their experience is invaluable.

Back in the 1970s, a 13 acre site stood derelict. Commercial developers proposed a development of offices which , like most of the other riverside development in that part of London, would have cut the surrounding community off from the river, keep all the added value of the development for themselves, and add nothing of value to the community. 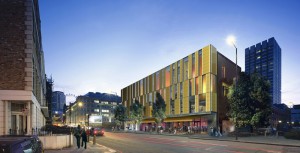 A community campaign was launched, which ran for 10 years, initially opposing the proposals, but then proposing its own scheme for the site. Their vision was for a mixed use development of housing, workspace, open spaces and community facilities. Much of the momentum came from some dedicated and visionary campaigners, who drove the campaign forward with a complete self belief that it would happen. They managed to obtain a £100,000 grant for a feasibility study, which paid for design work, planning and so on. This was risk investment, if the project failed it was written off, and if they were successful it would be rolled up into subsequent loans.

Following 2 year-long public inquiries, CSCB was granted planning permission for their scheme, but so had the developers. But CSCB had also gained considerable political support. The Greater London Authority were initially opposed to the idea, but changed its mind, and in 1984, the site was purchased. The first development was a park, a new open space in a part of London with very little in the way of parks. There are now 4 social housing co-ops on the site. Coin Street set them up and then withdrew, just taking the role of landlord and, in 3 of the 4, provides management services.

CSCB has also done a lot of work in ‘branding’ the area. Although it is hard to imagine now, in the 1970s, the ‘South Bank’ wasn’t really a recognised part of London. CSCB did a lot of work creating that ‘buzz’, running annual festivals and other events. In the early stages, the festivals were also vital in keeping up the spirits of the campaigners. They also formed the South Bank Employers’ Group, bringing together local employers such as Shell, IBM and the local hospital. They contributed to a fund which improved the public realm, bus routes, sign posting, the marketing of the area and so on.

CSCB has striven to be self funding from the start. When they first acquired the derelict site, income was generated through temporary uses including car parking. They have always striven to be self financing. Now school numbers in the area are rising, a leisure centre is planned to start being built soon, the Coin Street neighbourhood centre offers a mixture of office space for Coin Street staff, a nursery, meeting and conference space and other training and support services. CSCB employ 60 people. They are now a vital community resource.

Why, I asked them, were there not CSCB type projects across the country? Firstly, they told me, it is because planners still don’t see it as a serious alternative, not seeing that there is another way of doing development. Also, because if a community decides it wants to organise a similar sort of development, raising the finance to enable the first stage work, feasibility studies and so on, is very difficult. Without it, projects struggle to get off the ground, and are at a great disadvantage to larger developers. 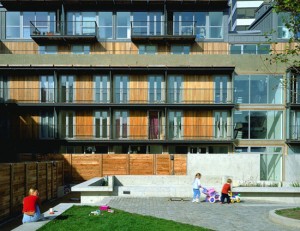 CSCB see their work as being to provide environmental, social and economic regeneration. This has been very successful and they now have a broad portfolio of properties (including the landmark Oxo Tower Wharf) and a diverse base of incomes sources. Their early stages in the 1970s mirror in many ways the work being done by Transition groups some 40 years later; forming in response to a threat, responding positively with a vision, forming a number of working groups, consulting with and engaging their community, catalysing community change. There is much we can learn from them.

CSCB run a consultancy service for community groups looking to start such projects. Sara Neuff of CSCB will be a workshop presenter at the 2009 Transition Network Conference at Battersea Arts Centre, London (one third of the places are already gone, so don’t hang around in booking your place). If your community contains a site which you think needs to be developed by the community, it will be a workshop not to miss. You can find out more about CSCB here.

[…] culture, political climate, economic surroundings, social environment, technological settings Learning the Lessons of Coin Street – transitionculture.org 03/12/2009 A couple of weeks ago I was in London, and I visited Coin Street […]

incredible stuff. recently asda pulled out from developing on our estuary site where the bus/train station, sports centre are located. half the town are gutted, half are ecstatic. TTE has the beginnings of what we call the ‘legacy’ project. sustainably built community centre, year round local farmers market, creative centre, a stilted pier into the estuary built to be in line with predicted sea level rises; fishing; watersports;top restaurant with locally sourced food.
coinstreet are an inspiration… one day council will recognise the visionary potential of its own citizens, one day.

You say “Open Space” and the photos have a lot of green in them, do you know if their where plans by the community for “greenspace” to be built in, or if that was a by product? also do you have any info on why?

A big part of why Coin Street has been such as success is that the site was purchased for £1.

The same goes for how I manage to live in London for £50/week including all my bills, broadband and council tax and how we managed to self-finance an eco refurbishment of the whole street: the pioneers who started the place got a free 75 years lease off the council back in the 70s.

The is lots of nice government rhetoric about transferring disused and underused public assets to community ownership and mangagement (see the Quirk Review, details here: http://www.dta.org.uk/activities/campaigns/communityassets/quirkreview.htm ) but no way near like enough of it happening.

Take private ownership of land out of the equation and many many social ills become a LOT easier to solve.

To get funding to set one up, see:
http://www.tudortrust.org.uk/LinkClick.aspx?link=82&tabid=36

To get some funding to do set one up, see:
http://www.tudortrust.org.uk/LinkClick.aspx?link=82&tabid=36