A Weekend of In-Depth Transition Coverage 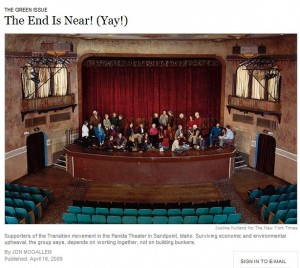 While most of the papers this weekend were obsessing about Susan Boyle, there were also three of the most in-depth and high profile pieces about Transition yet to appear in the media.  The first was a 5,000 word piece in the New York Times’ Green Issue called The End is Nigh (yay!) by Jon Mooallem.  Although parts of it make my toes curl, it is, overall, a fascinating piece, focusing mostly on Transition Sandpoint, and how the process is going there.  Amazing to get such in depth coverage in such a publication, and a huge boost to the work of Transition US (check out their new website, and a short ‘welcome’ film I did for them recently).

The second was in, of all places, Elle magazine.  Entitled Do Worry Be Happy, it looks at the psychology of Transition, and is a piece based on the journalist’s immersing herself in Transition.  A very positive piece, although after my delight at a recent piece on Canada’s CBC describing me as “a thin man in his late 30s’, I was less enamoured with this piece referring to me as “an adorable looking English academic with jug ears”.  Great piece though.

My favourite of the three was in the Sunday Times, and was by old friend of Transition and Transition Belsize activist John Paul Flintoff, entitled Why we forgot how to grow food.  A rip-roaring stomp through John-Paul’s allotment, cycling round Brixton with Duncan Law looking for windfalls, and getting his neighbours gardening, it somehow captures the spirit of Transition more than the other two.

A pretty amazing collection of articles for one weekend.  My favourite thing that I read this weekend though was Peter R0binson’s review of Eoghan Quigg’s album. Well worth a read for that variety of ways he tries to communicate just how bad it is, including the wonderful;

…on closer inspection it strikes a very clever balance. It is an album which at once satisfies demand for one Eoghan Quigg album and ensures that there will never ever be demand for a second.

I am off to London today for a ‘Big Energy Shift’  event, but will be back here tomorrow with something a bit more indepth.  By then you should hopefully have ploughed though all of these!  Thanks to everyone who brought these articles into being.

Topics about New-york » Blog Archive » A Weekend of In-Depth Transition Coverage
20 Apr 7:14am

[…] Transition Culture placed an observative post today on A Weekend of In-Depth Transition CoverageHere’s a quick excerptWhile most of the papers this weekend were obsessing about Susan Boyle, there were also three of the most in-depth and high profile pieces about Transition yet to appear in the media.  The first was a 5,000 word piece in the New York Times’ Green Issue called The End is Nigh (yay!) by Jon Mooallem.  […] […]

Hey, the “jug ears” comment is probably the only thing keeping your feet on the ground at this point! 🙂 Huge congrats!

No idea who Eoghan Quinn is, but enjoyed the review, but would liked to have seen what Charlie Brooker would have made of it…

It was a fascinating NY Times article and I’ve commented on it at: four ways to make social change work better. More power to your elbow.

Glad you liked the piece in Elle, but why the “of all places” qualifier? The point I made in the piece (which was, to be accurate, the first one out the gate of the three you list) is that you have a movement that is finally and at last appealing to all kinds of people, including the readers of Elle. People worried about global warming and now, peak oil, retreat from trying to convince the mainstream of the danger at their own peril. They call it the mainstream because there are so many of us swimming in it; our sheer numbers make it worthwhile to try to reach us (despite Ben Brangwyn’s argument in my piece about why you’d focus on the early adopters and not worry too much about the rest). But if people like me aren’t reached, the tide won’t turn and all the resilience of the Totneses, Sandpoints, and Sebastopols may not be able to stave off the nonresilient nonbelievers all around who suddenly find themselves up a creek and are greedily eyeing your utopian islands. You’ve created a wonderfully common sense movement; maybe Transition should have a little more faith in the ability of fashion magazine subscribers, American suburbanites, middle managers, etc. to see the merits of what you’re doing.

P.S. If you’d talked to me for the story, you probably could have negotiated the jug ears out of the piece. But for what it’s worth, the girls at Elle thought you were cute from the pictures.

Lisa is exactly right. To see the world in terms of ‘true believers’ versus ‘the mainstream’ is classically and laudibly Egalitarian, but it risks missing two important points: 1) not everyone, not every institution, is Egalitarian. Many are really turned off by this kind of approach, so how to reach them? 2) In spite of that, the Egalitarian ethos is everywhere, within every institution somewhere. You may be surprised to find it inside Elle magazine and its readership. But it’s not so surprising, really.

I read Lisa’s piece and thought it was very honest, and how great to see something like that in a such a mainstream and consumer orientated publication.

She is right to say that we retreat from convincing the mainstream at our peril, but – worse still – we delude ourselves if we believe that we are not(or have never been)in some way, big or small, part of that mainstream. Unless you were born into some tribal community living harmoniously with the land, each of us has had a turning point in our lives that made us re-evaluate how we were living within a society that is fossil-fueled, high carbon, and disconnected from nature.

Surely those of us involved in Transition believe that every human being has the potential for change, or why would we bother? And isn’t it an even bigger achievement to speak out when you are surrounded by ardent materialists, than when your friends and neighbours are also growing their own (which is the very fortunate position I find myself in)

Well done for sticking your neck out, Lisa. I hope your article reaches those people who need to know that there is somewhere to go with their fears and so much to be done with their potential.

Dear Ms. Chase; I’ll bet Rob will tell you this himself, but I’m pretty sure his comments were not intended to look askance at your magazine, or your readership, in any way. Truly.

On the contrary- it was a very intelligent article- and a breakthrough in the audience. Entirely wonderful.

It had to be a little bit of a surprise/shock though- the world of your readers is usually rather insulated from our world of earnest greenies.

Please be assured that us earnest greenie types were delighted with the article. And, of course, delighted with your descriptions of Rob. Who among us would not secretly love being called “adorable” – and “cute” by a writer from Elle?? 🙂