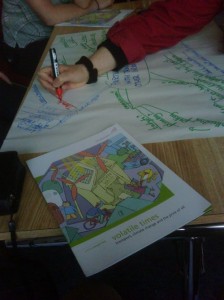 It is a few months now since Somerset County Council (SCC) passed unanimously their resolution to become a Transition Local Authority. You can read more about that, and the resolution itself here. Since then, the Somerset resolution has inspired Leicestershire County Council to do the same, and interest is growing from other authorities. Cllr Philip Booth in Stroud recently wrote a very good summary of all that is happening with local government and Transition across the country. It was therefore a fascinating and potentially far-reaching day on Friday 3rd April when a day was held in Taunton to explore what this might actually mean. 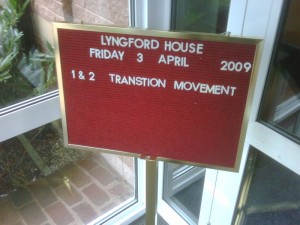 The day, entitled ‘Somerset – A Transition Local Authority’, was held at Lyngford House near Taunton, and was, in effect, the same workshop run twice, as two half-day workshops. Those attending were mostly senior management from Somerset County Council, as well as a couple of people from local Transition initiatives. The day was facilitated by Sophy Banks and Naresh Giangrande of Transition Training, with me contributing.

Both sessions started with an introduction by Sonia Davidson-Grant of SCC, who welcomed everyone and set out why SCC were thrilled to have become the first Transition local authority, and how they were dedicated to embedding it into their work. Then Sophy, Naresh and myself introduced ourselves. We made it very clear that the purpose of the workshop was not to tell SCC what to do, but to explore together what being a Transition local authority might actually mean. 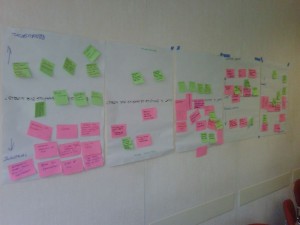 The first activity was called Temperature Taking, and was a look at the assumptions we have about the future. People were invited to set out what they see as the key assumptions driving change in our world. In groups of 5, they were invited to write those they saw as challenges on pink post-its, and those they saw as opportunities on green post-it notes, and then to arrange them on flip chart pads which were divided into 2 columns, the one on the left for those that were associated with / part of the industrial growth system, and the others that associated with a more localised, resilient system. 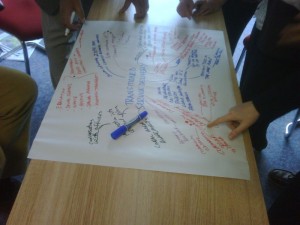 The interesting observations for me from this exercise were that people struggled to come up with positives, and also that most of their negatives were placed in the industrial growth side of the paper. It was useful to observe that many of those people charged with managing key aspects of the Transition actually struggled to imagine the possibility of such a thing, while at the same time, on some level, they were as dissatisfied with many aspects of how things are now as everybody else.

This was followed by my presentation, giving a crash course in peak oil, climate change and Transition. It included some observations on Somerset County Council’s current policies, on National Performance Indicators of relevance to this, and some key first steps SCC might take. I suggested that the 7 principles of Transition could be applied equally well to local authorities. Some of the ideas for what SCC could do included; 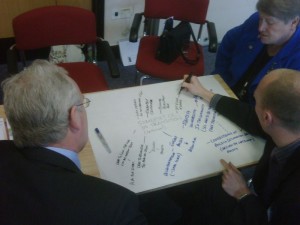 After a break, the next exercise was called Stepping into the Future. This opened with a look at David Holmgren’s 4 Energy Scenarios, as set out in his new book “Energy Futures”. These are Green Tech (the idea that technology can solve all our energy problems while allowing growth and consumerism to continue unaffected), Business as Usual, Energy Descent and Collapse. The group was divided into 4 tables, one for each scenario. Each table was asked to explore the following issues in relation to their scenario, Resources and Technology, the Electorate, Beliefs, the UK Government and National Performance Indicators. This led to some fascinating exploration of what each scenario might look like in practice, and the practicalities, challenges and opportunities of each.

One of the fascinating things that we observed in this activity was the tension between Green Tech and Energy Descent. While many of those attending felt that business-as-usual was increasingly unattainable and that a new approach was needed, many felt that they were already pushing for Green Tech, but felt that in doing so, they were doing Transition. There was a struggle to really grasp how different the Energy Descent scenario was, and the ways in which it was not Green Tech. This is a tension that I think will deserve deeper exploration in future sessions.

The final session, Local Authority and Transition, got down to practicalities. This session was run as World Cafe, with people moving around every 10 minutes between the 4 tables. For this last session, each table explored one of the following questions;

This was followed by a closing session with thoughts and feedback. 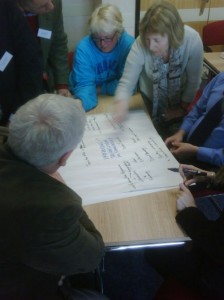 Overall I felt the sessions went very well. There was a level and depth of engagement that I was surprised by, and discussions very quickly began to explore practicalities and real issues. As well as the Green Tech/Energy Descent tension discussed above, there was also the tension between the Council wanting to ensure that Transition groups emerged across the County, but with the awareness that it is not their job to start them, indeed that for them to do so may well be the kiss of death to any future initiatives. Discussions around how a Local Authority might genuinely help to seed Transition initiatives in places where they presently don’t exist were fascinating and gave everyone much to think about. These sessions were a pilot for future workshops with local authorities, they identified many areas for new activities or refinements of existing ones, and were, I thought, a fascinating taster of what it might look like when Local Authorities really ‘get’ Transition.

Great to read this but I am still digesting yesterday’s posting. Humour is key but Tesco’s howler highlights the dire need for better information to reach all the parts of our communities.
Yesterday I found that one TV news channel had been added to my Freeview package – CNN, an American commercial station. Why CNN and not Euronews, to which, presumably, our taxes contribute? Euronews would be more likely to reflect a broader range of views and broadcast messages from MEPs such as Caroline Lucas, elected by proportional representation.
But if CNN can get in, is it unrealistic to envision a TV channel managed and funded by a network of transition-minded people?
…I had a dream!…

Just to Clarify, the Lecestershire County Council resolution was simply to agree with the principles of the Transition Network.

Well done to our Leicester cousins and Councillor Nevil Stork for putting the motion forwards.

I don’t know if this has been done, but it would help me to get home the message in a largely rural county, so this is a plea for assistance. The question is “If I had a 100 acre farm using current petrochemical based techniques using diesel to power my machinery what would the typical yield from my farm. If I couldn’t get my hands on petrochemical fertilisers or diesel to power my tractor and decided to go organic and turn part of my land to producing bio-diesel; how much of my farm would I need to use to produce enough bio-diesel to service the rest and what would my yield be from the farm?

You can see that I need to drive home to my fellow Councillors (some of whom are farmers) the impact of not having petrochemicals.
Neville Stork
County Councillor
Loughborough South

Hmmm now here comes the debate – which is more valuable and important: the need to grow fuel or food? Why not use all the 100 acres to grow food for the local community, employ the local community to help work the land, produce and distribute the food and use the unusable products (stalks, skins, spoiled food, animal waste etc) to create bio methane generated power which can provide energy for the farm, local homes, businesses and transport! That way everyone benefits!

I would be grateful for some enlightement on this as well, on behalf of a local Mid Devon farmer, who is considering community assisted (organic)farming as a way forward

Delighted that local authorities are seeing the value of transition initiatives and wanting to support them. That was certainly one of our aims when RCCE held the Transition Essex conference on October 2007 (hope you remember us folks in the East!).

I agree that a challenge for local authorities is to seed and support new groups without it becoming a local authority initiative. I would suggest part funding a voluntary sector post based at a Rural Community Council within the RCAN network. I am funded by Braintree District Council (employed by RCCE)to do exactly this role in the promotion and support of Community led planning and I see support for transition groups as a natural extension to this.

Thanks for putting up this excellent account of our training day in Somerset! I will be forwarding the link to all who attended or were invited along with notes from the workshops.

http://energyfarms.wordpress.com/ are doing in depth research into the pros/ cons of growing your own fuel to power equipment on site.

Ah Cara, if only we could. The real problem I have to overcome is getting Councillors from the current position in agriculture to your position. On the way I need to offer them a translation between the current practice and the Transition practice.
If I can show them the nightmare scenario of depleting oil availability and a sea of hungry mouths, then the cry will go up ‘What can I do?’, the concept of a half way house for agriculture will mean that (like Cuba) all will get less, but everyone will get something. Obviously those addicted to those ghastly hamburgers and plastic chicken ‘meals’ will struggle.
I need to tell Councillors in Leicestershire just how much food will be available from agriculture in their own County; there will be no food coming from great distances when we hit severe oil depletion. There is a denial that oil will run out not just in general, but in the decision makers. The comment of ‘ let them eat cake’ is one that I have heard so many times that I fear for the future.
Josef many thanks for the link.
Neville

Hi Cara & Neville,
To add to your conversation about farmers and food, I’ve just received this:

Bookings are now being taken for SWRural Update’s next event:

Price includes all refreshments and lunch.

“Agriculture 2050 – a day considering the options for local agricultural & food production after fossil fuels have run out and climate change is really here.”

Contact Beverly for a copy of the programme and a booking form.

We would be very grateful if you could pass on the information to anyone that you feel maybe interested in attending.