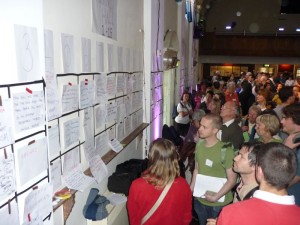 Made it just in time, my lift up from Totnes arriving at the Battersea Arts Centre at 12.45pm, ready for the 1’o’clock start (you can hear Carl Munson’s first Transition Radio podcast here, which captures the opening of the event). What an amazing place BAC is, the hall is absolutely huge, and the building is a warren of corridors and rooms.  My blogging output over the conference won’t be spectacular, as documenting the event online is in safe hands and I seem to be vastly busy; Ciaran Mundy is, as you will see below, organising various people blogging the event, and Carl Munson is uploading podcasts and photos.  Anyway, here are just a few thoughts on today….

After a welcome from myself and from the co-director of BAC, Sophy Banks and Jenny McKewen invited people to ‘map’ different aspects of Transition, from youngest to oldest people, from earliest stages to most advanced initiatives, size of populations, and then where in the world they are (i.e. North, South, East, West).  Once people had arranged themselves into where they were geographically, they were then invited to document what they have been doing. How is their initiative going, what are the challenges, the opportunities, what have they created? They were given lots of art materials and let loose to document what they have been doing. 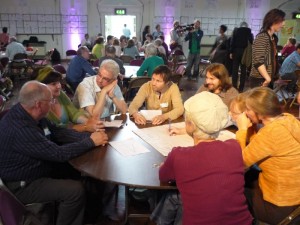 After this, the brainstorming began as to what would be the sessions for the Open Space. The wall had been divided into 30 Open Space questions over 3 sessions. Any fear we may have had that we wouldn’t get enough questions soon faded… in the end it took some careful amalgamating of questions to get it down to 90! I missed much of the above though, being hauled out to give various interviews to the many camera crews in the place. Tomorrow should be a bit calmer…. 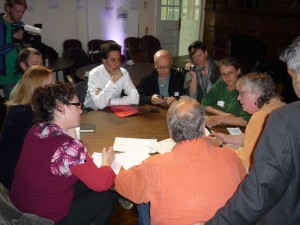 Then, just as the Open Space was about to start, local MP Sadiq Khan arrived, followed shortly by Ed Milliband (see left), Secretary of State for Energy and Climate Change. He had been invited to the conference as a ‘Keynote Listener’, i.e. not to give a speech, and not to be battered over the head Age of Stupid style, but just to listen, to get a sense of what is happening, and to learn about Transition. He sat in on a couple of workshops, including one on youth issues, and one very interesting one about the tension between inspiration and persuasion. The conversation revolved around how to inspire people to change, and what the Transition vision consisted of. 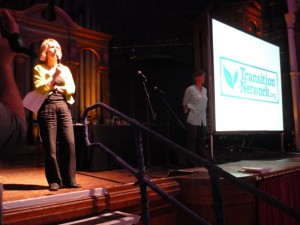 Then Ed and Peter Lipman of Transition Network had an interview which was filmed and which you can the audio of hear here. Very interesting. Then Ed went, and life returned to ‘normal’… until the Open Space sessions closed.  After supper was the amazing ‘EDAP in 2 Hours’ event, which will have to be the subject of another post.

Trying to tune in to our film right now – and getting a “sorry – the maximum number of viewers has been reached”.

Wondering what the problem is??? please. Anyone seeing this – please fix urgently.

Right – going back now for another go.

I think Ceridwen is not the only disappointed one.

Hoping you will be able to stream In Transition again soon for all of us who were unable to view due to overload of the system.

Tried to tune in from the US. I’m a contributor to the movie and really, really wanted to see it . . .

Bummer! First, too many viewers, then no sound!

Will it be available for viewing online???