« Quote of the Day: from Grazia Magazine
Your Chance to See ‘In Transition’, the emerging plans for its release, as well as an appeal for help in finishing it… »

An Evening at the Observer Ethical Awards

Goodness gracious.  I’ve just got back from the Observer 2009 Ethical Awards, clutching in my somewhat bewildered hands the award for Grassroots Campaigner of the Year!  Really not something I expected, I thought the other two contenders (John Stewart, HACAN, anti Heathrow third runway campaigner) and Georgina Downs (pesticide action campaigner) had much more chance than me.  Anyway, event itself was in the terribly grand Kensington Roof Gardens in London, (oak trees and flamingoes on top of a hotel… no raised beds though), and was packed with the great, the good and the gorgeous of London… , felt terribly out of place. 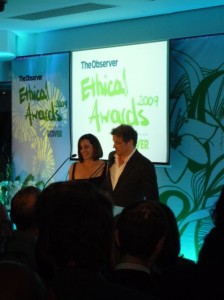 So, Colin Firth and Lucy Siegle presented the awards (see right), and some great people were selected.  The amazing Lower Shaw Farm, who have been permaculturing in Swindon since before I first found out about permaculture, won an award, as did Riverford Organic Farm, Caroline Lucas won the ‘Politician of the Year’ award, and David Attenborough won a Lifetime Achievement Award. When the grassroots campaigner category came up, the ‘the winner is’ moment was surprisingly nerve-wracking, especially as I had convinced myself I hadn’t won. They then showed a short film about me and I went up to get the award from Mr Firth. 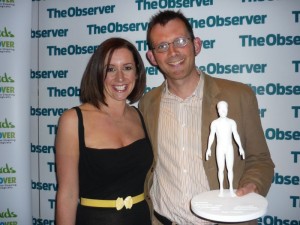 The awards themselves are odd objects. They are called ‘Habits’, (see left) and the week before the awards, I was rung up and asked 6 questions about my carbon footprint. Turns out I have the smallest of all the award winners (although the questions asked were so general that it is a very inexact science). So, depending on the size of your footprint, your Habit had bigger feet and hands or smaller. Mine is positively svelte and lean, whereas some had very oversized feet, although they did spell my name wrong (Rob Hopkin).

After the last award, I stayed around for photos and chatting (Maddy Harland from Permaculture Magazine was there, and some other familiar faces…), and checked out the flamingos (really), before heading off into the balmy London night somewhat earlier than everyone else, due to not having had any supper and being somewhat faint with hunger by then.

As with last year’s Schumacher Award, this is really an award for the Transition movement as a whole, rather than for me, and a national, high profile appreciation of the amazing work you are all doing. It raises the profile of Transition once again, which will hopefully be useful in your work trying to raise funding and engagement with your Transition initiatives. 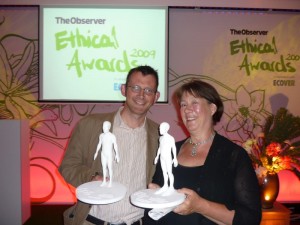 There will be a supplement in the Observer this week, with a piece about Transition, as well as pieces on all the other winners. In it, it identifies what the judges saw as being distinctive about this years winners; “they were less concerned with the ephemera of green living and instead expressed the growing seriousness of a society faced with major decisions, and the importance of converting good intentions into practical realities”. Sounds like Transition to me….

The candidates for the Grassroots Campaigner award were chosen in a vote by Observer readers, and then the winner selected from the top three by the judges. Thanks to everyone who voted, and also to the judges. It is easy to be cynical about awards like this and the mutual backslapping that accompany them, but as a tool for raising profile of initiatives like Transition, they can be wonderfully valuable.

Very well done. A great boost for the movement. Excellent.

Yes, you acknowledge that the award is shared by all of us involved in the transition movement, but you do provide a very fine figure-head for the movement, svelte footprint an’ all!

With such tiny feet you will have to become adept at walking on your hands. well done you inspirational person you !

Well done Rob, have yourself a beer from me (you’ll have to pay for it yourself though as Westcliff pounds arn’t valid in Totness – also we haven’t invented them yet either…)

Well done Rob. I read about Transition, and was really impressed by the effort.
Congrats.

Congratulations, Rob. You earned it many times over!

Congratualtions, Rob. I respect your willingness to become a figurehead in service to us all. And the flamingos do help… The great turning is actually happening! Yeah!

Congratulations Rob. And well done all of us!

Hi Rob, congratulations on your well deserved award.
I found your observations of the “Ethical Awards Event” very illuminating
!…… “event itself was packed with the great, the good and the gorgeous of London………. , felt terribly out of place.
” Touché!
,….” and checked out the flamingos (really), before heading off into the balmy London night somewhat earlier than everyone else, due to not having had any supper and being somewhat faint with hunger by then.” ( photos available!)

I had nominated Georgina, so I had a pass to go to the event.

I Feel it would have been nice for all short-listed candidates to have name badges so congratulations could have been given, important networking and serious chat with the real “celebs” could have happened. That’;s what really interested me.
I “accosted” 3 middle-aged males in an effort to identify John Stewart! I never managed to track you down.. as it seems you had flown the nest!

I did speak to “the BBC “Ethical Man” who was very approachable and interesting and Caroline Lucas who has been a stalwart in Supporting Georgina and some of the very friendly Ecover staff.

I did enjoy the “spectacle” and wine and we did manage to get a meal back at the hotel by 10.30 as we too were famished.
Maybe next year the Observer would be assisted with some helpful comments on how to make the event interesting. Meaningful AND Ethical!? Bit of a lost opportunity. See you there next year??!!

Hello. Congratulations for othis award. My question is out of place: is it independance from petrol and electricity tht is the purpose, because the grid mihgt not be functional and roads with no petrol can’t be repaired and trucks with heavy equipment to repair the grid may not be able to use roads. Then what? Zeppelins$ tracks?
Merci,
claude
also I am from Montréal, so from a northern country’s point of view, and relocalization in mind, growing food in the winter seems rather not explored yet by anyone.

Congratulations from me as well.

Just read the “Observer” article today – anyways they give a link to watch our film “In Transition” – and its back to your post on this and no way to get to view the film on from that.

Is the film going to be available online for us all to watch soon – (hopefully on YouTube)?

Congratulations on the award. Brilliant. That wasn’t very ethical to not feed you. Perhaps next year we can set up a soup kitchen outside for the starving delegates.

Congratulations Rob. Since the award is for all the transition movement I calculate it will be due to sit on my mantlepiece for a week somewhere around July 2012. lol.

Good on you though.

I have just found out about the transitional movement and have read of your achievement. I have the greatest admiration for you and think you’re an incredibly inspirational person. Political leadership is not forthcoming, nor will it be, it’s up to us and people like yourself, to take responsibility for both making the mistake in the first place and for rectifying it. Thank you!