« Please Take Your Seats Ladies and Gentlement, the Online Screening of ‘In Transition’Starts Now…
Mary-Jayne Rust on the ‘Resilience of the Heart’ »

Transition Featured In The Telegraph Magazine 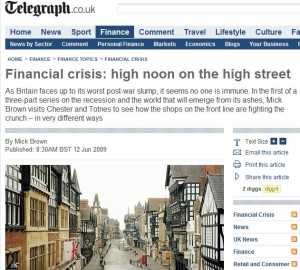 Quite a good article in the Telegraph on Saturday, High Street, High Noon, comparing how the recession is affecting Totnes and Chester, and how they are both responding.  The reporter, Mick Brown, seemed to find his finding out about Transition rather fascinating, and following his trip to Totnes and his interviews here, he subsequently made a point of coming to the ‘Transition Everywhere’ event run as part of the 2009 Transition Network conference.  A very thoughtful piece, avoiding (mostly) the temptation to write loads of stuff about Totnes being full of hippies, crystal shops and ‘gong showers’, and introducing, with care and respect, Transition thinking to the readers of the Telegraph.  Quite an impressive achievement, introducing Telegraph readers to the idea that the end of economic growth might actually be quite a good thing!

It was a very thoughtful article – I forwarded the link onto a friend who is not so convinced about transition. Then I noticed there was another interesting article on the same page – it was from Flint, Michigan where they are now demolishing houses to shrink their city. Planning to move people closer to town and demolish more. Too many empty homes and not enough money in the city to keep delivering the mail and collecting the rubbish from those that are still lived in.

It must feel a bit odd for those who have lived in Flint all their lives. Although, on the bright side, it will give them plenty of room for growing their food I suppose! Does Transition Flint exist yet?

Listen also to Philip Blond on Start the Week with Andrew Marr. He makes an interesting point about how much of the disaffection with Labour is due to a loss of a sense of society and civic power. As he puts it we ‘can choose flowers in garden but we have no ability to influence our streets, our village and our town.’ He emphasises the need for a ‘virtue culture’ and community organisation where ordinary people are asked what they need and local traders are preferred to supemarkets. All very relevant.

The reporter mentions one of the causes of Chester’s problems – which is repeated across the developed world: out-of-town shopping centres.
The reason an out-of-town shopping centre is economically attractive in the first place is that land is cheaper out of town. A more enlightened planning regime would have made a development like Cheshire Oaks impossible. This would have resulted in increased demand for retail development in existing centres, and a project like the redevelopment of Chester’s Northgate Quarter could have got up and running. As it is, that project has effectively stalled and Cheshire Oaks itself is also struggling. All elected representatives about to vote for an out-of-town development should be encouraged to go on a tour of towns that have already been subjected to one.

Great article, I will be doing as Toni did and passing it on to some other less convinced people.