The Stroud Pound Hits the Tills

This weekend saw the launch of the Stroud Pound.  Four denominations have been published, and over at Josef Coates-Davis’s blog, he tells the story of the design of the notes.

“The notes, designed by local artist Ronan Schoemaker and produced by local currency collector Steve Charlwood, are like miniature histories of the economic and cultural life of the Five Valleys. The most prominent local celebrity to feature is Laurie Lee, author of Cider with Rosie, who was born in Stroud and is buried in the Slad Valley. Local wildlife is represented by the rare Adonis Blue butterfly found on Minchinhampton Common. Stroud’s economic heritage is commemorated by the teazle itself, while the lawnmower, invented in Stroud, the green felt cloth that is still made in the town and Thomas the Tank Engine also feature”.

The launch has generated a fair bit of coverage.  The Telegraph focused on the fact that Laurie Lee (author of ‘Cider with Rosie’) features on one of the notes, and here is a piece from the local paper.  Local councillor, Philip Booth, on his excellent site Ruscombe Green, discusses Why We Need the Stroud Pound.  The Stroud Pound is the work of the Stroud Pound Co-op Ltd which in turn, grew out of Transition Stroud.  You can read their take on it here. They state that the reasons for the currency are; 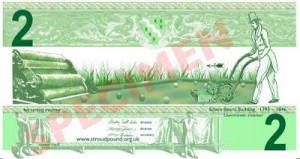 The BBC have a short film about the Stroud Pound (second film clip down) which is quite good.  Stroud is home to Molly Scott Cato, author, economist, and publisher of the excellent Gaian economics blog.  She dressed up as a banker for the launch, and you can read her take on the whole thing here, and her earlier musings on the note designs here.  Finally, here is the official Stroud Pound website.  The Stroud Pound takes a slightly different model to Totnes and Lewes which allows a whole new body of understanding to be gathered, being based on a co-operative model with a membership.  Very best wishes to all concerned, may it flourish and thrive.

The Stroud Pound Hits the Tills » Transition Culture
14 Sep 11:41am

I like the idea of the Stroud pound for some businesses but for local business that are web based it wont work IMHO. Perhaps I am wrong and someone can set me straight?

Some of the links above aren’t working but hpefully will on this blog with photos re the launch:
http://ruscombegreen.blogspot.com/2009/09/launch-of-stroud-pound.html

All exciting stuff as Stroud joins Lewes and Totnes with our own currency.

Thanks for the mention/ link 🙂

Its Josef Davies-Coates though, not Coats-Davis and you’re not actually linking to my site.

(and, that post is actually just syndicated from Transition Stroud‘s own blog 🙂 )

Alternative currencies, and beyond « MAKE WEALTH HISTORY
17 Sep 11:19am