« The Transition North Conference, with audio files….
Interview on the Agroinnovations Podcast: Part One »

Reunions with Trees that I Have Known (and Planted) 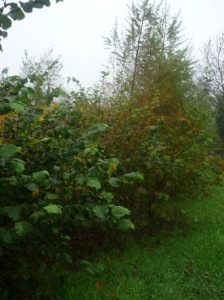 While in West Cork last week, as well as renewing acquaintances with many old friends, I also renewed the acquaintances of some trees I planted or worked with in some way, and it was fascinating to see how they have grown.  If you ever want a clear and powerful indicator of how time passes, plant a tree, wait a few years, and then pop back to say hello.  You suddenly feel very old, and also like you have, even if nothing else you ever do amounts to very much, left something good for those that follow you.  I’d like to introduce you to some of the trees I visited during my stay. 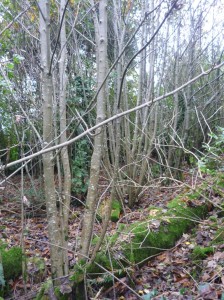 My in-laws used to live in a house which had about a quarter of an acre of overgrown woodland.  In about 1998, we stripped out all the brambles, coppiced the wood (sycamore and hazel) and planted new hazel and sweet chestnut into the gaps.  The woodland is down an old lane which was by now quite overgrown, but once I got into the wood, the regrowth was very impressive. 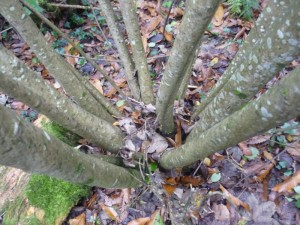 The work we did produced a lot of firewood, and left the wood looking very open and bare, with most of the trees reduced to stumps.  These poles could now be harvested and used for all kinds of different uses, and within 6 or 7 years they’d be back again.  Interesting how different the woodland felt with its dense regrowth, as opposed to when it was freshly coppiced.

Acacias at Glounbrack and The Hollies 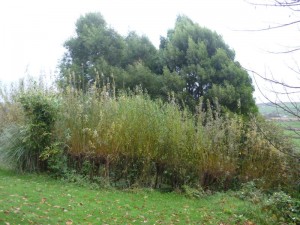 One of the trees I mostly keenly experimented with in plantings at various places was Acacia melanoxylon or Blackwood, a fast-growing acacia which is also a nitrogen fixer.  It can be planted in its own right as a timber tree (making a good, solid, durable timber), or as a nursery crop, given its nitrogen fixing qualities.  Although one reads about it as being fast growing, seeing a few that I had planted I saw just how fast growing they are!  These ones (see left, growing behind a willow hedge we had planted which is now regularly coppiced), also planted at Glounbrack, were now huge, at least 30 feet.

There was another that I saw at The Hollies which I had planted there a year later, which looked huge, and when I spoke to Donal who now lives there, he told me that the top half of the tree was blown off in a storm last year, and it had been twice that height!  It can also be coppiced, making it a great, fast-growing, albeit non-native, multi-purpose tree.  It is also rather beautiful. 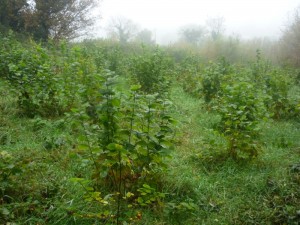 On New Years Day 2001, a few of us gathered together on a freezing cold West Cork morning at The Hollies to plant a field as a woodland.  We had designed it as a mixed planting, hazel coppice on the north side, a wide ride, or access road, running through the middle, and a mixed planting of larch, ash, rowan and other trees, to the south.  It was cold, but with the help of a few friends, we got all the trees in during the day.  During my time there, the trees got established, but were still quite small by the time we left.  Visiting after 4 years’ break, the growth was noticeable.  The hazels had already had their first coppicing a year or so ago, being cut down to stumps to encourage their sending up a number of shoots.  They were ably demonstrating the ability of broadleaved trees to not be killed when cut back, rather to send up shoots which can, depending on when you cut them, be used for a wide range of uses (this plantation is intended mainly as a reliable and ongoing source of firewood). 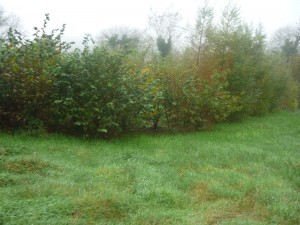 The mixed woodland’s growth was striking.  The larch had really got away and were about 20 feet tall.  Everything was now established and it was starting to have the feel of a woodland.  It was almost at the point of needing to start to coppice some of the trees.  The idea in the design was that some of the trees, the ash in particular, was intended to be coppiced as an understory to the larch, the cherry and some of the others, which were intended to form an overstorey.  The idea with the ride, which runs east/west, is that it creates south-facing suntraps in which to plant fruit trees.  However, these have yet to be planted, but would already find themselves in a sheltered sunny spot. 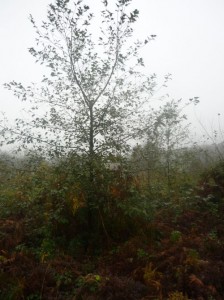 Red alder (Alnus rubra) is an amazing tree.  Alder as a species grows very vigorously on wet soils, and produces a very high quality, dense timber.  The alder that has been traditionally grown here, Alnus glutinosa, was used for making clogs and machine parts, given its density and rot resistance.  Red alder is a variety I read about in Agroforestry News as a potentially highly useful tree for temperate climates.  In the US, where it is seen as a weed, it is also cultivated for its timber, and used in the same way that IKEA use whatever the wood is that they use in their furniture.  These red alders were planted on the same cold New Years Day as the trees above, and established themselves very very fast.  It had been slowed down slightly perhaps by the bracken that had surrounded it and not been cleared, but even so, it had grown into a fine tall, straight tree, and will, in 15-20 years, offer some useful timber to whoever is living there then.

So there you have it, if no other lessons can be learnt from my sock-saturating stomp around the wet grass of West Cork visiting trees, it is that if you plant trees, they will grow.  If you make the intention that you are going to plant them, you design the plantings well, and you get out there and put them in, they will grow.  If you want to place a perspective in your life which straddles time, which enables you to really feel your place in the flow of time, a kind of measuring stick of how time passes that you can feel on a visceral level, plant trees.  It’s like the measurements on the door frames of childrens’ heights that many parents do.  Seeing the stage where they get beyond the grass, and start suppressing it with its leaf fall, and become a woodland, gives a similar sense of pride and sense of a job well done as one gets when your children become more independent, learn to tie their shoe laces.

As a generation which has less of a sense of place, who have grown up always on the move, and who answer the question “where are you from?” with a puzzled look, planting trees means that a part of us is always rooted to that place.  We can return to reflect on our own impermanence, the passing of time, and the power of the day our intention to plant a tree stepped across into the lifting of a spade, the slinging of the bag of saplings over the shoulder, and the stepping out, with our breath hanging in the frosty early morning air, to plant a woodland.  As we endeavour with our work on Transition initiatives, we have that same sense of working with intention but no guarantee of success, but in years to come, our work will also surely likewise be something we will be able to return to and reflect on, and to measure the passing of time against.

Categories: The 'Heart' of Energy Descent, Trees and Woodlands

I recently visited the house I grew up in. In the backyard, still there, was a lovely dogwood tree my family had planted. It had reached it’s peak height while I lived there, but it was so nice to see it again. Instead of that sense of time passing, I had a sense of continuity.

In the front yard, however, a clematis that climbed up a light pole, showering it in purple, was no longer there, and this saddened me deeply and made me think of impermanence.

Still and all, “…planting trees means that a part of us is always rooted to that place.”

I expect the blackwood would make an excellent bee forage and it is also used by guitar makers(in Australia at least). I’d be interested to know how much frost those trees have experienced. Alders are brilliant. The ones that we helped plant some years ago at the Pentiddy Community Woodland, near Pensilva, Cornwall, are now soaring skywards. Incidentally, Ele and Anthony Waters of Pentiddy Woods, who donated the land http://www.pentiddy.co.uk/ have just got planning permission to build a permanent dwelling on their permaculture smallholding. Brilliant news.

Thank you for your article – what a great idea. I’m a year into a backgarden forest gardening project (Landed – Forest gardening). Even though I look at the trees I’ve planted every day, I don’t get tired of watching them grow and change. When you grow fruit trees and you prune them there is a permanent record of your interaction with them. Your actions shape your environment in a direct way and the consequences develop over a long period of time.