« Interview on the Agroinnovations Podcast: Part One
Vandana Shiva on how Transition initiatives in the North can best help the South » 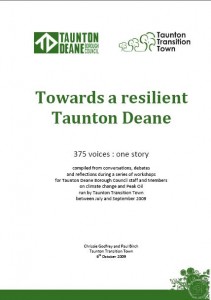 Just realised I hadn’t blogged about this yet. It is an extraordinary story, one which we might regard as an example of best practice in terms of how Transition initiatives engage their local authorities.  In effect, Transition Taunton Town got over 350 staff from the local Council to create a vision for the future of the area.  You can download their plan here, but here’s how it was described over at Transition Network News.

“Something historic happened in the summer of 2009 in Taunton. A UK Local Authority decided to take a whole staff approach to their responsibility for tackling the community’s carbon footprint and dealing with the potential effects of climate change and Peak Oil.

Over three months this summer, over 350 staff and 26 Members of Taunton Deane Borough Council attended an eventual 11 half day workshops, led by volunteers from Taunton Transition Town. Plumbers, planners, environmental health officers and car park attendants mixed with senior strategy officers, carpenters, Members and tree surgeons. In and of itself, this was extraordinary. On no other occasion have the people who make up this organisation come together in this way.

From that rich mix of backgrounds, skills, interests and political leanings emerged a story, a surprisingly consistent story about what a resilient Taunton Deane might be like in 2026. Together they envisioned a future in which the Borough has developed a successful low carbon, “localised” culture and infrastructure, capable of withstanding upheavals in the wider world likely to occur as a result of
our changing climate and increasingly expensive and insecure oil and gas supplies.

There was, without question, a shared sense of urgency that things need to change, and change soon. People at the workshops were, for example, prepared to use the car for fewer trips, or to car share, and to walk and cycle more, and insulate their homes more effectively. They were prepared to shop differently, prioritising locally produced food and goods, and buying seasonally.

There was also a growing sense that we needed to get back in touch with what “community” is first though less clarity on how to achieve it. People called for a far stronger lead from the Council itself. They want to see a commitment to actually making a difference, with Members taking the politics out of carbon, able to be brave enough to be honest about the facts: that change has to happen now.

One of the first actions the Council has taken is for all 18,000 planned new homes are to be carbon neutral, with the Authority saying “no thanks” to developers who don’t want to conform to these new standards. From now on, all new builds would have to use sustainable building materials, with compulsory energy efficiency measures.

There were many calls for both more time and more space to grow food with suggestions that the Council can create more allotments, with greater choice of smaller plots.

However while while the attendees recognised the Council’s role in promoting best practice, no one expected the Council to “do it all”. Most importantly, attendees say they are ready to talk to their family and friends about the issues, to get across just how important changes on an individual level can be.

“I think it is a pretty extraordinary thing to have happened” said Chrissie Godfrey from Taunton Transition Town, who facilitated the work along with from www.visionjuice.com. “It is something I hope could inspire other Transition groups in thinking about how to work with their own local authorities”.

From the workshops a document has been written with a synthesis of the stories the participants told about that future – together with priorities for themselves as individuals and as a Council now.

[…] This post was mentioned on Twitter by GreenFeed and TT web: Ed Mitchell, Kate Corder. Kate Corder said: having grown up near Taunton and gone to school there seeing this http://bit.ly/413kR4 Taunton Transition town plan is good news […]

This is great news! and congratulations to all involved!!!

Is there any chance we could get a copy of the structure/format that was used for the facilitated workshops?

We need to adapt. Take a look at this article The Great Transition: http://www.scribd.com/doc/21656220/The-Great-Transition-Navigating-Social-Economic-Ecological-Change-in-Turbulent-Times

Very inspiring and will pass it on to my Local Authority.
i too would like to know how the decision to do this came about and how the process was structured.

This post was mentioned on Twitter by transitiontowns: TT Taunton and their local council co-produce a Taunton vision for 2026: http://bit.ly/413kR4 : (ed: top work, all 🙂 from @robintransition…

Thanks Rob – just found this – will peruse on the train this afternoon – much obliged for posting.