Why the last thing London needs is more Clouds 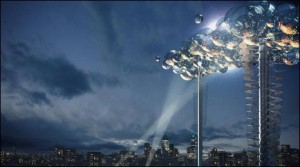 Gah.  I feel a rant coming on.  Here’s a crap idea for you.  The BBC announced today the idea of ‘The Cloud’, a new hideous construction to grace the city’s skyline in time for the 2012 Olympics.  It would take the form of a “giant cloud” that would “float” above the city skyline (well, at nighttime anyway, during the day it would merely look like the ugly and ridiculous construction it actually is).  The structure, tall mesh towers with ethylene tetrafluoroethylene ‘bubbles’ on top, would reach 120 metres into the London skyline, where it would be used to project “weather information, spectator numbers, race results” and so on.

It would have an observation deck and park, and the idea is that it would become a visitor attraction in its own right.  In order to stop it feeling like another invasion of the city’s mental environment, and the ultimate advertising screen which is really what it is (until projecting adverts onto the Moon gets the go ahead), the designers are presenting it as a “celebration of technology”, and propose that it is funded by the micro donations of millions of people.  If you give them £1, you are paying for one pixel on the screen. Apparently this is “a monument to crowd sourcing”.  What an abuse of a fine and otherwise useful concept.

And in case you’re worry about the environmental impact of this monstrosity, its fine, because it is actually the “zero power cloud”, being run by solar cells and harnessing the kinetic energy from the falling lifts.  That’s alright then.  I presume that they are also keeping the embodied energy of the structure down by using local and low embodied energy materials; locally harvested timber, clay plasters and some cob walls in the downstairs part for thermal mass?         No, I thought not.

According to the photo accompanying the piece (see right), helmeted cyclists will be hurtling around the inside of the structure (going so fast as to be blurred), right next to pedestrians and a flimsy handrail the only thing between them and a 120 metre plummet to a certain death.  Not sure the designs in their current form have been run past Health and Safety.

I think there’s a human rights issue here.  As it is, our mental environment is being encroached upon and eroded by advertising and uninvited messaging at every turn.  Walk into Kings Cross station and your eyes are at once drawn to the huge screen with Sky News broadcasting 24/7.  Adverts now follow us on and off buses, the Tube, into films we watch and all over the internet.  That’s bad enough.  But to put this Cloud into the sky, projecting news and advertising 24 hours a day is an invasion too far.  Perhaps I want to be able to walk across London during the Olympics and not know who won the 400 metres.  And after the Olympics?  You can bet it will end up like the Kings Cross screens, advertising, ‘news’, celebrity tittle tattle and more advertising.

While I think there may be a role for “celebrations of technology”, the kinds of technology I want to celebrate are those that are appropriate in scale, contribute to the strengthening of community and culture, are capable of functioning in a lower energy world, have low embodied energy in their creation, can be owned by the communities surrounding them, not by distant corporations, and which are aesthetically pleasing.  I see little to celebrate about technology that flaunts itself in your face whether you want it to or not, sells itself to the highest corporate bidder, and allows corporate messaging to elbow its way into your mental stream unbidden at all hours of night and day.

If we want to actually leave a legacy of value to a city of 7.56 million people on the verge of facing the harsh realities of energy descent and of a world running out of oil faster than was previously thought, surely we can do better than to spend up to £50 million on a glorified advertising hoarding. How about retrofitting the housing stock, taking land out of development for the creation of urban market gardens, renewable energy, thinking through seriously how a city like London is going to feed itself, mobilising a generation of young people to be the ‘green collar’ skilled workers of 5 years time?  Perhaps we might crowd-fund for that instead?  Surely the intention should be to sort out and futureproof what already exists before building new things like this?

The article states that Boris Johnson, Mayor of London, is “still deciding” whether to give the project the go-ahead or not.  We can only hope that common sense prevails.  Perhaps his recent encounter with Frannie Armstrong, producer of ‘The Age of Stupid’, where he rescued her from a girl gang, will have rubbed off, and he will come to see the lunacy of taking a bunch of carbon intensive materials, assembling them in a carbon intensive way, to create an unnecessary structure that people will fly to come and see, and which will be used to advertise more unnecessary carbon intensive stuff that they don’t need and that the planet can’t afford.  Or perhaps I’ve missed something, and its actually a great idea.  Help me out here.

No, don’t think you’ve missed anything. What a hideous idea this is.

I would be inclined to agree. This abomination would probably cost somewhere in the region of £20-25 million (my rough estimate – it’ll probably be more!), and the other things that could be done with that money are staggering.

How about a few more wind turbines instead? Or a decent network of cycle tracks and lanes in and around London? Or even (heaven forbid) some extra funding for Transition initiatives?

I see google are offering free advertising for the “cloud raising effort”. Interestingly if you google cloud the first result is about cloud computing, which I believe google have an interest in. Spot any links/vested interests here?

I just know that something good is going to happen.
I don’t know when,
But just saying it could even make it happen.

[…] https://www.transitionculture.org/2009/11/11/why-the-last-thing-london-needs-is-more-clouds/Adverts now follow us on and off buses, the Tube, into films we watch and all over the internet. That’s bad enough. But to put this Cloud into the sky, projecting news and advertising 24 hours a day is an invasion too far. … You can bet it will end up like the Kings Cross screens, advertising, ‘news’, celebrity tittle tattle and more advertising. While I think there may be a role for “celebrations of technology”, the kinds of technology I want to celebrate are those … […]

[…] of The Cloud concept for London’s 2012 Olympics, I have to agree with the ever-sensible Rob Hopkins of the Transition Town movement who says that what the project amounts to […]

Rob, I think your analysis is right on. It’s sad to think that if you want a project to celebrate technology in such an imposing way, this is the best you can do? Instead of such a fluffy concept, why can’t we integrate objectives that you can get your teeth into, something that will address problems that need fixing. Surely the mayor of London can think of two or three issues in London that crowd-funding could actually have an impact on?
Any of your suggestions would do.
Corinne in Paris

when myself and Mark Warner ran a permaculture design course at Tottenham Marshes earlier this year we were amused by a hoarding in front of one of the big olympic building projects near Tottenham Hale station that read ‘Working with Nature’. We peered over looking for signs of cob and straw bale buildings, timber framed houses, wind turbines, forest gardens and aquaculture ponds, but saw only a multi-storey concrete and steel building under construction, surrounded by bulldozers, earth movers cranes and plastic piping…

Just something I forgot to mention in my last post:

“As it is, our mental environment is being encroached upon and eroded by advertising and uninvited messaging at every turn.”

A very eloquent and appropriate statement. I’m fourteen at the moment, and almost everyone else in my year group is (RANT ALERT – sorry about this) a slavering corporate drone, for want of a better expression. The adverts on TV at the moment are constantly hammering home the message that if you don’t have the latest piece of electronic crap that comes out of a Chinese sweatshop then you are nothing, nobody. Perhaps the most scary part of it is that I actually treated a fellow student for hyperventilation when their mobile phone broke down. (End rant)

I’m probably unfairly generalising, but it is honestly how I feel.

On the plus side, it’d give the pigeons a somewhere new to go and poop all over.

Fair comment Andrew, one should always think of the pigeons.. with these spiky iron things on every available pooping surface in London nowadays keeping them off, to provide them with such a glorious technicolour latrine which is a celebration of technology is surely the least we can do.

we should get together with the pigeons and have a coup.

This post was mentioned on Twitter by robintransition: Ranting about this stupid idea to build ‘The Cloud’ in London, a ghastly unavoidable advertising monstrosity … http://tinyurl.com/yemo4sn…

It’s not unlike the BBC’s ‘Big Screen’ idea for city centres. A few years ago, I was invited by the Humber Mouth Literary Festival to show some of my work on the Big Screen in Victoria Square, Hull. Normally, the Big Screen plays BBC television for those who get so little television elsewhere in their life that they need to have it when they’re out in the city as well. One of my pieces deliberately contained 30 seconds of blank screen with no sound, following a slow fade of the word SILENCE from the screen. Without asking permission, the BBC edited the blank screen out entirely. When the curators objected, they were told that it had to be removed because “people would think the screen wasn’t working.”

But there are serious examples of resistance: Sao Paulo for example, a city of 11 millions people, went ad free in 2007: http://tiny.cc/vYGmo

Mind you, when people campaign against billboards In the US, the industry starts screaming about “freedom of commercial speech”: http://tiny.cc/DnvMS

Andrew and Rob- “On the plus side, it’d give the pigeons a somewhere new to go and poop all over.”

Ah, beware, beware!! Always think about “what happens next” in these dialogs.

What happens next is: the promoters decide (after reading your comments) to project movies of falcons and goshawks on those lovely balloon billboards. Swooping from one to another. Then, you see, they can claim that the towers are providing yet another community service, by spooking all the pigeons within sight…