« The TTT Christmas Party
Is Transition Relevant to the Global South? A Discussion at the Klimaforum »

What if they held a Climate Summit, and nobody came? 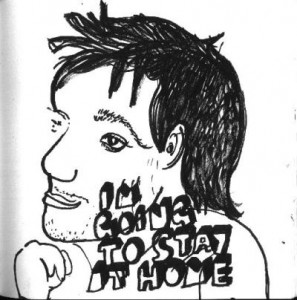 So Copenhagen has been and gone, with no meaningful agreement being reached, and now the politicians and lobbyists have headed home having failed to do anything meaningful to address this staggeringly pressing challenge.  Hugo Chavez came up with the quote of the fortnight when he observed “if the climate was a bank, they would already have saved it”.  The gathering of the environmental/climate change movement in the Klimaforum with its dedicated bringing together of green luminaries and activists failed to have any meaningful impact on the proceedings, as did the mass street protests, designed to shame delegates into meaningful action and to draw a line in the sand.  In short, the responses that the alternative movement/protest culture/social justice movement usually rolls into action when such events take place, didn’t work.  So, might we do things differently next time?

It is, after all, what is expected.  Activists and experts all head to the venue, with huge carbon implications, in the hope that this is “the one”, new police powers get passed, activists are subject to harassment and intimidating policing (George Marshall’s piece on his Copenhagen experience is well worth a read, especially for his despair at the amount of polar bear costumes on display), the media can run its “climate change demonstrations turned ugly today” stories to divert interest away from the lack of progress, in the fringe event people inspire and challenge each other, and in the main talks, most representatives arrive, as one does at any auction, with their preferred bids and the extra they will offer if pushed already worked out long in advance.

It had also been made clear in advance that Obama would be arriving without the support of Congress, so that anything he promised there would struggle to become a reality. In the end he promised $100bn from no-one yet knows where, the Chinese were blamed by everyone for the failure, the world was condemned to at least a 3.5 degree rise, and the focus was on lowest common denominator compromises… It was, as Ed Miliband writes in today’s Guardian, “a chaotic process dogged by procedural games”.  In the end, what had been trailed as’ the last change to save the planet’ was turned into “something we can build upon”.  A failure, in other words.  The statements from politicians that the protests were useful and that NGOs were playing an important role in the process began to sound increasingly patronising.

Miliband praised the efforts of NGOs and the many campaigns run in support of meaningful outcomes from the talks.  “The challenge for all of us is not to lose heart and momentum. The truth is that the global campaign, co-ordinated by green NGOs, backed by business and supported by a wider cross section of the public, has achieved a lot. We would never have had targets from so many countries, the engagement of leaders, and the agreement on finance without this sort of mobilisation”.  I am left wondering though if perhaps that campaign, and that mobilisation, which of course we need, could take a markedly different form next time.

How would it be if we all took a very different tack, if the approach of activists was one of ‘practically modelling the world we want to see’?  Clearly, one of the challenges among those sent to negotiate is that they have no vision of a post carbon world. This was driven home to me last week on a more local scale, when I interviewed a senior planner in my local council about climate change, Transition and so on as part of this PhD research I am still limping along with.  I asked him, as my final question, what his vision was for our area of Devon in a scenario where it had successfully reduced its emissions by 90%.  It was clear he had never thought about it. When pushed, all he could come up with was akin to 1950s Britain, rather like a Hovis advert, and when I asked him if it was something that would appeal to him personally, he replied that at his age, the idea had some appeal, but to younger people he thought they would see it as rather dull.

Similarly, for the negotiators at Copenhagen, a world emitting 90% less carbon than it does today is not an attractive proposition.  Their mental picture is of denial, austerity, misery, giving up things, losing things, certainly not a future they bounce out of bed each day determined to bring about.  It is not a problem exclusive to them.  The same is true for many of us.  We expect the negotiators to come up with a deal that ‘saves the planet’, but hope that we don’t have to make many actual changes to our own lives.  This is what, nationally and internationally, makes it so difficult for politicians to offer any meaningful response, the fact that they are, in effect, trying to make unelectable policies electable. 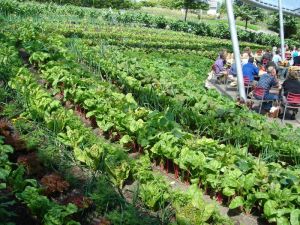 So how about this, as a co-ordinated approach for the next time there is such a gathering, which will again, no doubt, be trailed as ‘the last chance to save the planet’?  We (that is, those who care passionately about climate change and the need for a proportionate response), confound expectations, and stay at home.  Using the web-based technologies we now have at our disposal, we co-ordinate an international festival of meaningful change.  We stay home and insulate whole streets, create community gardens, work meaningfully with our local authorities to do projects with them, eat local food diets for the duration of the conference, live without cars, insulate our schools, set up an area of the settlement in question as a model for what it would look like transitioned.  We start bringing the future that we can imagine but which is still beyond the comprehension of so many, into focus.  We would have enough lead-in to the conference to be able to do something meaningful and which tells a powerful story.  We could even chip in what we would have paid to get there towards helping to resource it.

This would only be capable of being more effective than all going there if it was brilliantly organised and brilliantly co-ordinated by an exceptional web presence and an exceptional media team.  After all, if a tree falls in a forest and no-one is there to hear it, it doesn’t make a sound (or something).  If we can co-ordinate things like Avaaz, 350’s day of action, and other similar online events, surely we could do this?  It could be like an online Live Aid type thing, people around the world telling stories of what they are doing and why, celebrating their projects, and making the point that this is improving their quality of life rather than diminishing it.

This approach would save a great deal of carbon, would give greater permission and leadership to world leaders and negotiators, would completely confound what is actually expected of us, would shift the focus away from people concerned about climate change being equated with people who attack policemen, save a fortune in policing bills that could instead be spent on loft insulation, and would be far more likely to bring about meaningful behaviour change at a community level than the current approach.

As usual, I’m sure I will be accused of being naive, of misunderstanding oppositional politics.  Of course we have to hold politicians and negotiators to account, and to show our displeasure, concern and anger at their actions.  Yes, the bringing together of activists from the Global North and South is a vital and visceral reminder of what we’re doing and why we’re doing it, as Ben Brangwyn’s recent post set out, creating powerful and vital networks.  But might we not be more creative and playful about this?  Might it not be us that actually shows the leadership next time, rather than expecting these negotiators to do so?  Might we not look at Copenhagen as not just a huge failure of the political process, but also a huge failure of protest culture to have any meaningful impact on that process?

I didn’t go to Copenhagen.  Other people from Transition Network did (you can catch a short view of Naresh and Sophy running a workshop there in the 4th ‘Stupid Show’, see here), and their input was well recieved and I’m sure was useful and impactful to those who attended.  I’m sure that some dynamic networking took place that will prove to have been very useful.  However, how about next time we take the lead; we show not just from our Powerpoints and placards that another world is possible, but also that by staying home and working with those around us to start practically building a low carbon economy, loft by loft and street by street, that a leaner, lower carbon future could be, and will be, fantastic.  Just that once, just for that one conference.  The conference that they ran, and no-one came.

“What if they held a Climate Summit, and nobody came?”

Isn’t that exactly what the politicians would want? Remodelling our own communities in a more sustainable way is what we are doing for the rest of the year!