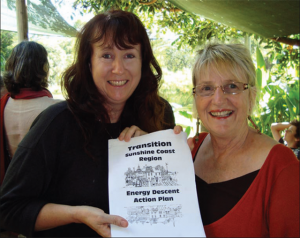 Written by a small yet committed group of locals and facilitated by Transition Sunshine Coast founders Sonya Wallace and Janet Millington, the plan is the first step in creating opportunities for bottom up, top down cooperation between communities and council in response to peak oil and climate change.

“We’re so pleased to be able to deliver our EDAP to a receptive council. We’ve been working hard to build relationships within the community and with local government by raising awareness about the need to prepare for peak oil and the impacts of climate change and it seems that hard work has paid off,” Sonya Wallace said.

Following the Transition Town model and the Kinsale EDAP, the Sunshine Coast EDAP identified and considered a wide range of areas that will be affected by energy descent such as; 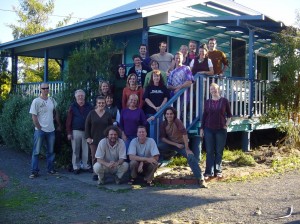 How can I get a copy of their EDAP? It may serve as a model for the one we are developing.
Thanks,
Russ

It’s great to see new EDAP’s adopted. Have any of these plans formally replaced/succeeded municipal master or comprehensive plans or have their processes been marketed as this? I’d be interested in whether any such EDAP or sustainability plan risen to the stature of a local master plan.

Hi,
congratulations!!!
How is it going since then?
It would be great if I could get a copy too of this EDAP
All the best
Antonio

hi janet and sonya.
would you please email me a copy of the EDAP please. I am considering writing a TRANSITION AUSTRALIA type essay/book/video and it would be a huge help.
Cheers and love to you both
lisa-jane and mathew

by the way – i forgot to say – congratulations. what an amazing achievement.