« Starting Monday: Will You Help With Re-Writing the Transition Handbook?
Transition as a Pattern Language: ‘Measurement’ »

Celebrating the New Totnes PV Array with an Energy Fair! 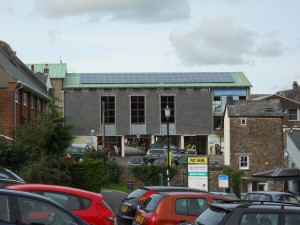 On Saturday Transition Town Totnes held one of those events that feels really celebratory and somehow like it marks a significant step forward in the whole Transition process (well, in Totnes anyway…).  The Transition Streets Energy Fair was designed to celebrate the new photovoltaic installation on the Civic Hall, to inspire a new round of recruitment for Transition Streets, to provide the public with access to a range of renewable energy installers and information, and to raise the whole profile of renewables and energy conservation.  It did all of these, and more, in a very well-attended day with a great buzz. 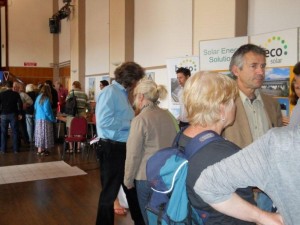 Totnes Civic Hall now has a photovoltaic roof of 75 PV panels, 14 kWp of energy generating capacity (see pic above).  The system will generate around 13,000kWh of electricity per year, about a third of the energy used by the building.  The system looks stunning in place, although being situated on the less-seen side of the hall and being at an angle that means it is not visible from many places.  The panels were funded as part of TTT’s Transition Street initiative, which was one of 20 finalists in last year’s ‘Low Carbon Communities Challenge’.  The Energy Fair opened at 10.30am, and at midday, with the Hall very full, a just-completed film about Transition Streets was shown, which is due to be posted on YouTube this week, when I will then post it here.

After this, Cllr Tony Whitty, the Mayor of Totnes, welcomed everyone and talked about the history of the Hall, and how he saw this installation as a key element in the regeneration of the building.  He told the audience:

“We are pleased to have been able to be partners with TTT on this project. We fully support the aims of Transition streets in bringing together neighbours not only to consider their energy consumption but to get to know each other, exchange ideas and socialise BUT also to reach and support those members of the community in most need due to fuel poverty. The whole town benefits from neighbourhoods becoming closer, exchange ideas and support each other. More than ever, given all of the difficult economic circumstances, we need our town to be supportive to all members of our community and to be sustainable and resilient. This Transition Streets project is making a significant contribution to that aim”. 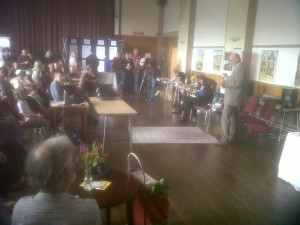 Then one of the Transition Streets groups spoke about their experience of Transition Streets, how it had brought them closer as a community, and how when they had finished the 7 sessions, they carried on meeting anyway, and were exploring doing other things together. 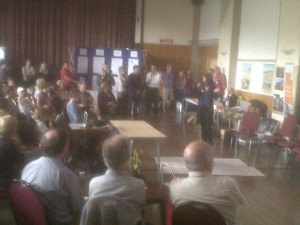 Then Fiona Ward of Transition Streets (see left) read out a message from David Incoll of South Hams District Council which said how the Council had engaged with the programme and how it had enjoyed its involvement.  Then Chris Bird, of the TTT Building and Housing group mentioned his just-published ‘Local Sustainable Homes’ and how he had originally intended for it not to include anything about Totnes, but in the end, so much was happening that he had no choice but to dedicate a chapter to it! 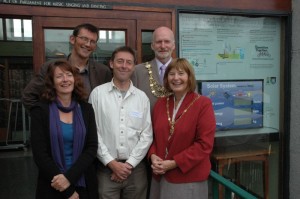 Then I spoke and said how it was just over 4 years since TTT was launched in the Hall, and that none of us could have guessed that 4 years later we’d be launching an energy company, we’d have the roof of the hall turned into a power station, and we’d have so many people across the town engaged in the practicalities of reducing their energy usage.  I also said that the story we are telling here is so important, because it has inspired so many people around the world.  It is a process based in awareness of the challenges, but with a focus on the opportunities, and that it is a process that needs peoples engagement and support.

And that was that, and the rest of the day was spent in the Hall with cups of tea, a steady throughput of people finding out about renewables, Transition Streets, and TTT.  Unfortunately what we weren’t able to do was to actually switch on the panels, due to rewiring work that was needed and which has taken longer than was hoped, but we’ll do that in a couple of weeks.  It is very exciting to see things take firm steps forward, and it is great to see what CAT’s Zero Carbon Britain report calls ‘Powering Up and Powering Down’ (installing a new low carbon energy infrastructure and energy conservation) happening simultaneously.  This, coupled with the recent launch of the Totnes Renewable Energy Company last week feels like significant parts of the relocalisation jigsaw puzzle falling into place.

Welcoming initiative by Totnes. They have set an example for various groups and local organizations across the globe to follow, by installing photovoltaic roof that can generate around 13,000kWh of electricity per year. Considering the huge contribution of fossil fuels to the environmental hazards, such a kind of initiative should be taken by all the local and municipal organizations across the globe to save the environment and work towards making the planet earth green and eco-friendly for generations to come.

I think it is high time we started taking nature and our planet earth seriously and do our bit about environment, sustainability, climate change, biodiversity, clean energy, green living and so on. One great place to start would be http://www.elpis.com. Elpis is an online community focused on responsible living and sustainable growth. You can measure, reduce and offset your carbon footprint; set up petitions, volunteering and fundraising projects for your favorite causes; help create action plans for sustainable communities; buy a range of eco friendly products and services; and network with other people who share a common interest in a low carbon, responsible lifestyle.

[…] is a short promotional film made about Transition Streets (premiered at the recent Energy Fair), telling the stories of some of those who have got […]