« A Review of ‘Localisation and Resilience’ by Frank Kaminski
Transition Lancaster’s Potato Day! »

Community Asset Development 2: an interview with Dave Chapman of BASSAC 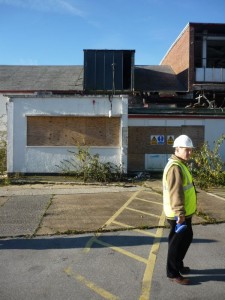 Dave Chapman works for BASSAC (the British Association of Settlements and Social Action Centres) and lives in Totnes, where he is active within the ATMOS Project.  For the Ingredient of Transition being prepared for the forthcoming new Transition book on the Community Ownership of Assets I talked to Dave about community asset development and also about the ATMOS Project.

Self-determination, more than anything else.  It’s about defining where you’re going to.  Land ownership enables you to define where you take a community in the end, so it can come down to supporting energy use, food use, employment, housing – it’s the basis for the right mix within a community.

What’s the advantage?  If there’s lots of projects that could happen without things being owned by the community, when is it most appropriate?

The private sector model, the business-as-usual model in terms of economic development, economic growth at all costs, tends to suck resource out of areas.  The value of keeping it within the community and having it owned within the community is that you tend to want to re-circulate things within that community.  So effectively, your share holders are your local community members.

It means that you start to return profit – which is either job creation, local wealth in terms of social capital that might be gained through training, education, supported employment schemes, opportunities to access services that don’t currently exist because public sector providers can’t provide them – you get the opportunity to create that mix at a local level basically.

What kind of support do communities need in order to do that?  If a few people meet in a pub and say, “we should own that piece of land”, there are clearly some stages that go between that, and them being in a position to be something that could confidently and legally take that on.  What needs to go between?

There’s a whole range of things.  There is everything from supporting that group to become a legal entity of some form that is recognised.  There’s a whole range of things about understanding the bureaucratic context that you’re got to work through – understanding the laws of the game – through to being able to access finance.  And finance is one of the most significant things because land has a value attached to it.  Very rarely do you get given stuff for nothing, although hopefully the new context will mean that asset transfer that favours community engagement is something that is likely to happen, there are more opportunities, but you still need money because actually if you want to build something on it, or you want to refurbish something on it, you want to do something with it, then you’ve got to make money somewhere.

To support that, you need business planning skills as well.  I think really what’s needed is a mix of people, plan and passion basically, and actually understanding where you support people in putting the plan together – so that’s an issue about capacity, about business planning skills, about all the legal stuff that you might need to be in; you can support with a variety of agencies around them.  Actually if you’ve got the right plan and the right mix of passion, that has a tendency to kick funders over and finances over basically.

But it’s the right level of finance and the right sort of finance, because bog standard, main stream finance, which has been premised on the business-as-usual model, has tended to use debt and interest as things that can be manipulated in their own ways – hence the financial collapse that we’ve got at the moment, whereas good use of debt, and good use of interest rates actually means that you can end up with sustainable community businesses.  The bridge through to finance being around social investment, and actually understanding the real risks that communities are taking and the real risks that are involved, is something that needs to happen as well.  But it’s that mix of things.

In the current climate, with the government talking about big society and so on, but at the same time grants are drying up – do you think this is a better time for communities?  Is it looking more likely at the moment or less likely?

I think there are more opportunities there without a doubt.  If you look at the current stuff that’s being talked about and the Localism Bill, which is around right to build, right to buy, right to challenge, right effectively to run services and move around mutuals – again all of that mix, if it’s done in the right way, would tend to suggest that actually there are opportunities there.  That’s the opportunity to say, “we can run services from a building locally that’s owned locally, and actually we don’t need to sweat vast amounts of profits out of it for share-holders that live somewhere else, but actually take a decent living wage, return the rest back in to the organisation and do some of the things we wouldn’t be able to do in this community if there weren’t the resources.”  So all of that mix does exist.

In terms of finance, all of the stuff that’s going on around community share issues, around the social impact ones and the potential they have – just looking at finance in a slightly different way and recognising the social value of it, again there are opportunities there.  The down side of course is actually that right now we’ve got to make those opportunities real, and I think that’s the challenge to be honest with you because actually, do we have the capacity within communities to do it?  Do we have the capacity within support agencies to enable communities and support communities to do it?  If we don’t then we will find that what we call astro-turf organisations spring up all over the place – those that are not quite what they appear from the outside, effectively private sector that suck up assets relatively cheaply, run services relatively cheaply and still drag the profit and surpluses elsewhere.

With the Atmos project –the Community Builders funding we got to move that project forward, and other funds like that which are available to give a foot up…..without something like that, there’s no hope of a level playing field at all is there?

No.  One of the things that’s clear….the Community Builders Fund is quite an interesting one.  It took a long while to come to fruition and that mix of organisation development support to start with, business development support, real cash grant funding to do feasibility stuff, and then the possibility of a mix of loan and grant finance in terms of investments…….and that front end stuff is absolutely critical because by and large, 90% of the time you can’t get it for love nor money.  If we do asset based development right in communities, then actually one of the things we’ll end up doing is generating enough surplus to do the risk stuff in terms of the feasibility work ourselves.  Because that’s where it needs to come from – we need to generate that head space to be able to do it.

In terms of the Atmos project….we’ve talked before about the potential of a community like this owning an asset like that, all the different possible spin offs and implications it can have.

To start with, owning a chunk of real estate land – that in itself is quite significant.  It’s a context change, because all of a sudden you’re taken as credible in certain circles.  So it has the tendency to open up doors for discussion that you weren’t previously engaged in, which starts to enable you to position a community and the stuff that goes on within a community in a completely different way.  You can then think about things you can do within those building that you weren’t doing before, so all the stuff around education and training that is right for this community – it doesn’t compete with what’s going on already but it generates added value in so many areas.

The move to do things differently….the opportunity to be creating radically low carbon solutions to things where actually nobody else was doing it.  Nobody else has the mindset to do it because you don’t gain as much profit out of it.  The opportunities to think about different kinds of housing models and to try things that are different – that goes back to discussions that you might have had with people like KEVICC (the local secondary school) and the health authority to say, “actually no, you can’t get housing for key workers here because property prices are too high – is there something we can do?  Can we work with the other co-housing groups?  Can we do stuff around tide housing?”  All those kinds of opportunities.

Those forms and models that may not have been quite right in the way that they were before but actually if they’re tweaked now and they’re right in the context for Totnes, they will fly.  That’s what the other stuff is about – how you use the land itself.  If you’ve got the public realm that’s actually in the public ownership – fruit trees planted in the right place for example, very simple things that actually make quite a significant difference.  So actually you change the way a whole community works as a consequence.  And the real value of that is actually you create a space that everybody has an attachment to, so you start to break, down barriers within communities – you build cohesive communities that way.  That means that you worry about what your next-door neighour is doing where perhaps you didn’t and the reason you’re doing that is because you’ve got a common connection somewhere.   Now all that can start from one seed of a very small project that starts to build out and have contacts and connections elsewhere across a community.

How many accountants, lawyers, bankers do we have in our TTs?
Step forward, read “Prosperity without Growth” and give us a hand!