A Review of ‘Localisation and Resilience’ by Frank Kaminski 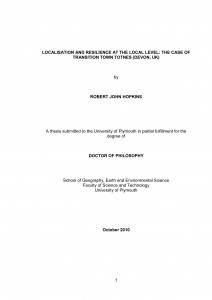 Localisation and Resilience at the Local Level: The Case of Transition Town Totnes (Devon, UK)
By Rob Hopkins
475 pp. University of Plymouth, Devon, UK – Oct. 2010. £15.00; available only in PDF at Transitionculture.org.

For several years groups of innovative, environmentally conscious people worldwide have been part of a social change movement called Transition. It strives to create relocalized communities that are resilient to the looming climate and energy crises, and in which “the future with less oil could be preferable to the present.” It all began humbly enough as a class project six years ago. Since then, it’s spawned thousands of communities, inspired a documentary and several books, been awarded millions in grants and vaulted its figurehead, Rob Hopkins, to something like celebrity status in southwestern England (really not sure about this bit! Rob…). If there’s a movement today that can be welcomed as a fulfillment of David Korten’s 2006 book The Great Turning, this is it.

The bible of Transition is Hopkins’ Transition Handbook (Green Books, 2008). But in hindsight Hopkins has come to view this book with a critical eye, noting fallacies in its reasoning that he attributes to Transition’s organic, ever-changing nature and its still being a young movement. Partly to address these flaws, he’s now come out with a second book, Localisation and Resilience at the Local Level: The Case of Transition Town Totnes. It’s the dissertation for a doctoral degree that he pursued for four years along with his activist work. Hopkins is now a newly minted Ph.D. and is marketing Localisation and Resilience through his Web site as a companion volume to Transition Handbook.

The dissertation is a case study of the first official Transition Town, the English market town of Totnes, long a popular tourist destination known for its alternative culture. Using interviews, focus groups, questionnaire surveys and other social science research methods, the study examines the degree to which the Transition ideals of localization and resilience have become a reality in Totnes. (Transitioners endorse a number of upbeat definitions of a resilient community, a popular one being “[a] culture based on its ability to function indefinitely and to live within its own limits, and able to thrive for having done so.”*)

When Transition began, Hopkins was an instructor at the Kinsale Further Education College in Kinsale, Ireland. He was teaching permaculture, an environmental design approach that dates back to the ‘70s oil crises. Not yet peak oil-aware, he saw his work primarily as a way of nurturing beneficial relationships within communities, rather than as a ticket to a gentle ride down our energy descent. But when someone did introduce him to peak oil, it dawned on him that permaculture just may be humankind’s best shot at salvation. He and his students embarked on a project to determine what steps their community would need to take in order to successfully weather the decline of oil. The result was a cornerstone Transition text, the very first Energy Descent Action Plan (EDAP).**

Kinsale Town Council made the historic decision to adopt their EDAP, with the result that Kinsale is now a proud part of the Transition network.† However, it is in Totnes that Transition took off the fastest, hence Totnes’ status as the first official Transition Town and the home base for the movement. In just a few years, Transition Town Totnes (TTT) went from being the abstract aspiration of zealous volunteers to a limited company offering an array of programs aimed at promoting self-reliant, low-carbon living throughout the South Hams region (a few highlights include Gardenshare, the Nut Tree Planting Project and a local currency called the Totnes Pound).

It is challenging to generalize about results, since Transition is meant as a catalyst for community action rather than as a prescribed program, and different communities come up with different initiatives depending on their particular circumstances. But one general conclusion that Hopkins draws from his research is that the Transition approach has been effective in generating community engagement and initiating new enterprises.

Hopkins admits that Totnes still has a long way to go toward meeting its needs locally. However, he demonstrates that it could supply nearly all of its own food needs, the only exceptions being foods that require soil types not indigenous to the region. As for energy, Hopkins shows that local renewables could meet half of total demand, and that efficiency measures could make up the difference. On the subject of housing, he says that demand could easily be met with local materials (e.g., straw bales, earth, lime, car tires and other recycled objects, hempcrete and cob) but that ramping up current natural building efforts to a commercial scale has proven difficult. Lastly, with regard to transport, Hopkins notes Totnes’ high level of automobile use and suggests that a crucial step in reducing it will be to sway people’s attitudes.

Some of the study’s findings weren’t at all what Hopkins had hypothesized. For example, he originally hypothesized that the main obstacles to resilience and relocalization in Totnes would prove to be an absence of community cohesion and a lack of skills. But as it turns out, the actual stumbling blocks are largely issues of governance. Another major obstacle is the need for increased social enterprise, a still-little-understood quality that Hopkins suggests may be “the key to stepping across from thinking to doing.”

The oral history interviews give the dissertation an ethnographic feel and illustrate how profoundly daily life in Totnes has changed since the advent of cheap oil. The interviews are used to gain insights from the past that may prove useful in acclimating to an oil-scarce future. Hopkins’ team randomly selected townspeople with memories of the period from 1930 to 1955 and had them describe their recollections of the local economy and what practical skills people had then that they don’t have now. In one telling interview, a woman remembers the dreaded chore of doing laundry before electric washers and dryers were widespread. She recalls, “We had a mangle, you had to mangle your clothes! It was terrible. Your feet and legs would get wet, it was hard work.”

Hopkins is mindful of his positionality as a researcher trying to critically examine his own movement. “I am not able to assume an entirely impartial and neutral position in relation to the subject of this PhD,” he concedes. So in designing his methodology, he took steps to at least minimize bias. He had his assistants conduct interviews for him whenever possible, since interviewees who knew him might have been inclined to give him answers that he wanted to hear. And whenever he was conducting interviews, he would tell interviewees to “please answer the following questions as though I have no connection whatsoever with TTT.” He admits that these measures weren’t completely effective, but suggests that the resulting sacrifice of objectivity was made up for by the advantages of his embeddedness in TTT, namely, his trusted access to specialists in a range of fields and an understanding of the community “from the inside.”

Localisation and Resilience represents a solid case study of the first Transition initiative. It goes a long way toward filling some chasms in the resilience literature, which, as Hopkins points out, is still quite sparse. And of course, one of the ultimate tests of its academic rigor has been passed with flying colors, now that Hopkins has successfully defended his research and been granted a doctoral degree.

Hopkins’ Englishness automatically gives him an edge over other peak oil thinkers. England, like Europe at large, is implicitly more appreciative of the gift of abundant oil than is America, since it’s long been much more expensive there. And while the nation shares much of America’s oil vulnerability, it’s easier to get around there without fuel, since the area was settled long before the reign of the automobile. Localisation and Resilience offers no comment on the prospects for Transition on this reviewer’s side of the Atlantic; but it certainly has been heartening to watch the movement build steadily here, from just one official initiative in 2008 to 79 at last count.‡

Frank Kaminski is an ardent Seattle peak oiler, a connoisseur of post-oil novels and a regular book reviewer for Energy Bulletin. He can be reached at frank.kaminski AT gmail.com.  Republished with permission from EnergyBulletin.net.

Thank you for this review….I learned a great deal from it. I’m new to Transition Culture but have a quickly growing interest in it. I’ve been aware of peak oil for quite a long time now (I was shocked when I learned about it…and am aware of how small a % of the population world- wide knows anything about it…)When I was first introduced to the peak oil concept one of the first questions that came up in my mind was “What meaning does this have for the planet? for our lives? This is very significant!” But I didn’t have a clue really why it was significant or what to do with my new knowledge.

Over the years I have slowly developed a better understanding of peak oil significance. And just a few montghs ago I came into contact with an article that referenced “Transition Culture” and I immediately went to the web-site. I am now beginning to learn about this…and am now aware of what the answer(s)is/are to my initial question several years ago.

The shift of paradigm and the challenge presented by the new paradigm facing all of us is mind-boggling to me. But I am so appreciative of having found Transition Culture and Rob Hopkins. A review like this adds alot to my knowledge base and my motivation to change and become part of the new paradigm which is slowly but steadily emerging among us. Again…thank-you.;

Well said, Ardelle. I am always eager to share Rob’s grounded brilliance with my local community and happy to spread Transition near and far.