« Transition and the cuts: a report from Camden
Somerset Transition reversal raises questions over localism agenda » 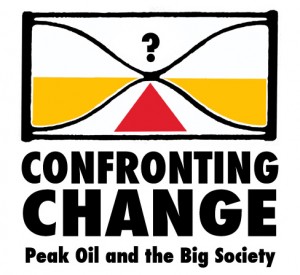 I wrote a while ago about Transition Finsbury Park‘s fantastic ‘Confronting Change’ event at the South Bank Centre just before Christmas.  Well, thanks to the fine efforts of Miguel Faliero, Simon Maggs, Dan Roberts and the TFP team, the films of the event are now available for your delectation.  Here they are, in order of appearance, Polly Higgins, Michael Meacher MP and then myself.  The Q & A that followed can be viewed here.

Very lively and exciting.
Thanks for sharing it.

Thankyou for Some Hope amazing stuff!
If we all sit around and do nothing towards Sustainability, the world would be a very scary place indeed!
Its Time People Created The Future that they desire!
And The Time Is NOW!
Its now time to ACT!
Luv and Peace Trishwildfire

Oh this leaves me feeling sad and hopeful. For there to be hope though we need many,many more people to commit to changing direction but also we need to be very clever in overcoming the weight of greed, selfishness and ignorence that pervades the minds of those in power. When I do see hear of an industrialist, a politician or big financer turning around and suddenly seeing the light that is when I believe we can change our way of living and make human life on Earth sustainable.