Transition and the cuts: a report from Camden 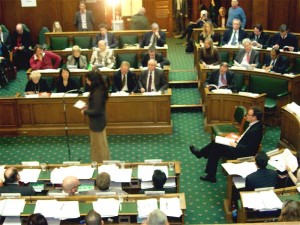 Here is a guest post by Sarah Nicholl and Marietta Birkholtz, on behalf of CamdenCAN, Transition Belsize and Transition Bloomsbury.

It was heartbreaking to be at Camden Council last night. Because of the government-imposed cuts libraries, playgroups, breakfast clubs and after school care are being swept away in a borough that has always prided itself on its public services, especially for the young. Protests outside the council turned into chaotic and ugly scenes and the police prevented demonstrators entering the building on public order grounds. A few made it in and loudly berated councillors for cutting services. Council had to be adjourned at one point. 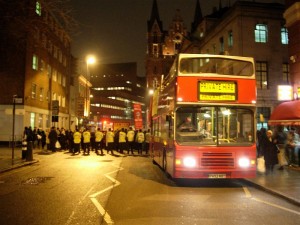 In the heart of the passion and chaos were representatives of many of Camden’s green groups – Camden Climate Action Network, Camden Friends of the Earth, Camden Cycling Campaign, the Gaia Foundation, Jewish Community Centre, Transition Belsize, Transition Bloomsbury and Transition Primrose Hill – to beseech the council not to forget the future in this difficult present. With the sound of axes in our ears we argued for the council not to forget the good work already done on environmental issues in recent years and to do more going forward to uphold and continue this work.

Specifically we asked for: 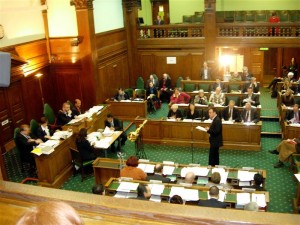 Our deputation was well received. Hopefully there’s enough of a political consensus in Camden to keep action on sustainability and resilience to the fore. To help sweeten the pills, and to prove that we can help with the solution rather than just get angry about the decisions, we gave every councillor and the Chief Executive a copy of Alexis Rowell’s new book “Communities, councils and carbon – what we can do if governments won’t” – which we hope will inspire them to make a difference (if you look very closely in this picture you can see the odd copy…)

The title of that book feels more apposite by the day. Quangos working on environmental or social issues are being swept away. Those that promote business remain. Swingeing budget cuts are being imposed throughout the voluntary sector. And meaningless Big Society rhetoric is being deployed to cover an unprecedented rollback of the public sector. It’s no surprise therefore that Lord Nat Wei has stopped doing his “Big Society Town Hall Tour” and decided to spend more time earning money for his family. And how right the Transition Network was to keep the Big Society at arm’s length.

But still they will try to use us as a cover. A low point of our evening came when the leader of Camden Council’s Tory group said: “We over here will not argue that there should not be public services, but we may argue that there should be alternative providers of services like private companies or maybe Transition Belsize who were part of the first deputation we heard tonight.”

Ow!  We briefly considered taking over Belsize Library and turning it into a better community asset. But there are only so many hours in the day. We simply don’t have the capacity to pick up the slack that’s being created. We’re not about to start running child care services, libraries and care homes in the five minutes available to us to take the decision. You cannot build a Big Society at the same time as imposing swingeing cuts to both the voluntary and the public sector.

In view of, and in spite of all this, now more than ever we would wholeheartedly encourage Transition Initiatives and green groups to come together and lobby the council not to forget about our future.

It’s important to keep lifting the conversation up, to see that the events we’re witnessing are simply the ripple on effects of declining energy and a contracting economy.

Yes, there is still ample opportunity to address the discrepancies and the questionable choices about where funds are being used, and at the same time education about why we are in this place has to continue with all parties at the table.

On that score, well done for getting Alexis Rowell’s book into everyone’s hands.

This is what a shrinking state looks likes. It’s what the peak oil movement is all about. Cuts are now inevitable. Over the last decade or so the state as been in ‘overshoot’, we’re now seeing the inevitable ‘collapse’. Debate remains as to how far we’ll undershoot before establishing a new steady state.

There can be debate about just cuts fall though. Ultimately they are likely to follow the path of least political resistance which currently looks, in significant part, like local government service.

“You may not get it back for many years, if ever, and that is a big long-run loss of living standards for all people in this country.”

Here in Transition Llandeilo we’re discussing how to ensure that local people get control of their own destiny by setting up a People’s Assembly.

In due course this would not only challenge the control of our lives by oil-guzzling, carbon-emitting giant corporations, but transfer their resources as well as the land, and the financial system into collective ownership, as the basis for a not-for-profit economy.

Then we can set about dealing with the causes of climate change.

Have to agree with you Chris. Here in Aus we are still running on the fumes of the China fuelled mining boom, which has the people, government and business mesmerized. They think it will never end so the spending on roads and airports goes on.

After our recent climate mishaps that devastated Queensland and Victoria and will cost $10 billion to repair, there is still no politician that will dare to link this with climate change. Then they spent this week arguing over an insignificant price on carbon?

It is frustrating to live in the midst of plenty, knowing that the storm clouds are approaching. At least I know how Noah must have felt.

I’d like to encourage everyone who’s fighting to preserve people-oriented programs from purblind budget cuts to always include at least a brief mention of raising taxes on the wealthy as part of any and all solutions to the unavoidable contractions of a peak-oil world. One can argue about whether raising taxes can ever be sufficient to bring budgets back into balance. But cutters should never be permitted to act as if cuts were the only possible solutions on the table.

Its good to see that green groups in Camden are requesting some useful things, but its disappointing that for some people the knee-jerk reaction to “cuts” is to “demand” that cuts are not made. James Chris and Ian (above) are taking the contextual view, rather than falling back on negative politics of envy – and I’m with them. Ultimately, the Transition message is that big changes in the way we’ve got used to things being done are inevitable, but we can plan for better futures by reducing our vulnerabilities and becoming more resilient at the local level. In the cheap oil era we’ve got used to “them” providing libraries, public services of all kinds, and that too is a form of dependency…

On a related note, I recommend the following article:

The War on the Middle Class: Reflections on Politics in The Age of Depletion
by Eric Lindberg, Transition Milwaukee

“Does anyone, especially those familiar with the structural problems caused by Peak Oil and the likely end of economic growth, share any ambivalence about the recent Madison protests? Walker is of course a disaster, and solving the budget problem on the backs, mainly, of public employees and the middle class, without tax raises on those who can afford them, is unconscionable and is just plain bad economics.
This, we are told, is part of “the war on the middle class.” But a way of seeing is a way of not seeing, and when we hear this phrase over and over again, we are turning away from the longer and more violent war on the poor.

…When we see things mainly as a war on the middle class, when we compare our privilege mainly to that of the increasingly small and wealthy economic elite, we fail to see that we remain the group of people most destructive of the ecosystem, the people who are the single largest source of CO2. The war on the middle class means we may lose our average 900 sq. ft. per person household space, and have to return to an area per person still twice the size we enjoyed in 1950, and still more than any other industrialized nation. When we look at our wages shrink, that means we may have to deforest Oregon and its cedar to build our new deck instead of the far nicer ipe from Brazil’s shrinking rain forest that we would have preferred.

My point is only this: yes decreasing our wages (and of course our rights) without touching those more wealthy than us in the middle class is unfortunate. But what about the silent billions who are closer to the threshold of starvation and disease than we, even with our higher co-pays, will likely ever to be.

My point is only this: the economy will shrink; dealing with this gracefully and without kicking the misery further down the economic and global ladder will take a tremendous recalibration of our expectations.

My point is only this: we will not come close to an equitable distribution of the world’s resources unless we in the middle class learn to do with less. Again, Walker’s way is horrible, and scares me as the primary way a shrinking world of abundance is being handled. But we also need to think about the truly poor and desperate as we consider how much we deserve.”
http://www.energybulletin.net/stories/2011-02-22/war-middle-class-reflections-politics-age-depletion

Thank you David, for championing the well being of all those who sit somewhere lower down on the economic and global ladder.

A century back, we thrived on far less than we have today, and we will again. It’s the unknown that makes us nervous and fearful of change, which is why the Transition Town vision of a brighter, more vibrant low energy future is so important, as a means to attract us to put the energy into building that!

On that score you may like to watch what’s happening in Lyttelton, where after being at the epicentre of the recent earthquake, there is a community-led rebuilding underway, and in this video from Saturday they are showing great resourcefullness and spirit.