« Nigel in Transition
So, what exactly is a Transition enterprise? »

French Connection: a report on the acceleration of Transition in France

Here’s a guest blog from Naresh Giangrande on his recent trip to France. 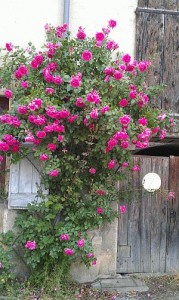 Snow capped mountains and broad fertile valleys, welcome to Trieves; a region of France in the foothills of the Alps above Provence, and the host for the first major French gathering of Transition Initiatives. You won’t find Trieves on any map, and even Google seems not to know of its existence, however there is a strong local identity centred around ecological awareness, and it come as no surprise that it is the host of this, France’s first Transition conference. It is place of small holdings and many young people returning to the land.

You can get a sense of where Transition in France is heading; quite rightly so. You can taste the cultural identity of France embodied in Transition in France; something José Bové and Pierre Rabhi – and the Colibri folks would be proud of.  France is the last major European country to take up Transition, just ahead of Albania,  and about at the same stage as Portugal. Why has it taken so long? 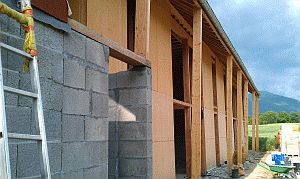 An eco-house under construction in Trieve

The first day of the gathering, Fete de la Transition Après Pétrole, focused mainly on practical workshops. There was a sustainable building workshop, held at the home of one of the initiative’s members who is building a beautifully constructed eco home in St Sébastien. Participants were learning about post and beam straw bale construction, hemp and lime plastering, ground source heat pumps, how to site your home in this part of the world, and the various trade offs and decisions to make when building an eco home. 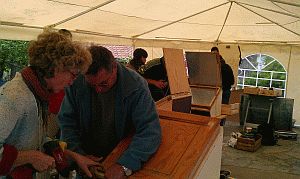 The other workshop focussed on solar ovens, a really viable proposition here where you get 300+ days of sunshine. The workshop involved building a simple but effective solar over that would cook a casserole in about 4-5 hours. Jeremy the workshop leader explained that the main barrier to take up of this technology was re ordering your life, and having to think of dinner right after lunch to give the low grade heat source the time to work its magic. We are so used to dense energy sources, the switch to less dense energy will require significant lifestyle changes and adaptations; some difficult, but many like this one just a change. The re-culturing of homo detritus to homo solar will be far reaching in many ways we can’t even imagine.

I learned of the somewhat chaotic and painful beginnings of Transition Geneve, which is dormant for the moment. There were many participants at the conference from Geneve, so it feels like more of a regroup than a collapse. I was told of the heart warming beginning of Transition Mayenne. A couple of friends just had to start this initiative, and have done so successfully. When there is the love and care for each other at the heart of a Transition Initiative, which I sensed from Transition Mayenne, so much is achievable and fun! 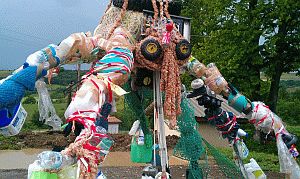 Transition Trieve is launching today on day 2 of the conference, more on that later. It is an area where bio (organic) small holdings are cheek to jowl with larger conventional farming. And in their allotment project there is an uneasy peace between the older conventional, chemical growers, and the in coming bio brethren. There are many successful small holdings bringing many younger people into a very rural, and until modern time isolated community. I had ample opportunity to to avail myself of their wonderful produce. The day ended with a presentation of “La Décroissance énergétique” by the association Negawatt. They are an organisation that is doing some technically impressive modelling of the energy mix of France and charting ways forward to a low energy, low carbon 2050, suggesting a combination of energy efficiency, renewable technology, and energy descent. 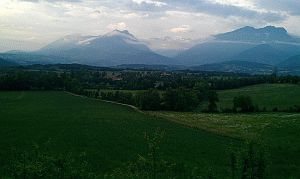 Semur in Transition is a small town south of Paris. I met three young farmers who were inspired to start a Transition Initiative by Rebecca Hoskins film ‘A Farm for the Future’. Their concern was to reclaim their autonomy as farmers. Farmers increasing don’t and can’t control anything. Not only the usual concerns of farmers, like the weather, but everything from sale of produce to financing are out of their control and this doesn’t work. In fact it is a source of stress that frequently leads to suicide. And farmers are traditionally an isolated community. So their challenge, as they see it, is to open a closed world and were wondering how to introduce techniques like open space into their farming community.  The editor of Silence, a prestigious French environmental magazine is part of the group from Lyon in Transition. He sees the Transition message as a synthesis of many environmental organisations and ideas.

Ferney Voltaire Transition, a town of 8 thousand near the Swiss boarder, is on fire. Five came to a London training and went home very inspired. One hundred and fifty attended their first film showing, ‘Local solutions from a Global Disorder’. Three weeks later they held an open space about forming an Initiative. A large crowd stayed on til past midnight, refusing to leave. The organisers had to close the hall, and not knowing what to do next they stood up and proposed forming an initiative, to which there was a resounding yes. This led onto a second open space shortly after where working groups were formed. Now four months later they are involved with the council planning transport policy. It’s has all gone so quickly, that the initiative has now eclipsed the scope of the initiators and taken on a life of its own, “just like it says in the book and on the training”, one said. 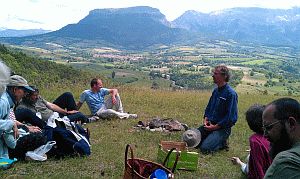 A group, who has had virtual meetings coordinating Transition in France and calling themselves a liaison group, met physically for the first time. They invited me along to a picnic of bread and cheese, and cherries in an insanely beautiful spot overlooking the valley, with views of distant mountains. Their current aims are: 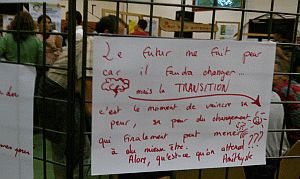 There followed discussions about the legitimacy of their organisation, and whether TIs in France accept them. Some interesting questions are being asked of them by another similar environmental organisation, Colibris. Questions such as, How long to maintain the present temporary group before a more structured organisation with better and more direct representation of TIs can emerge?, How to make themselves better known?, finding funding, and creating contact people between themselves and the TIs.

They presented themselves to the TIs represented the next day, and although they decided not to ask for a vote of confidence as many TIs weren’t represented, support for the work they were doing was expressed many times. There was appreciation for them taking on the national coordination job, while working and being heavily involved in their local TI. Trieve en Transition was also much appreciated for organising this conference! 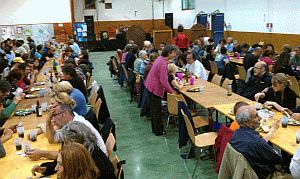 The sit-down supper at the Unleashing of Transition Trieve

Day two finished by Trieve in Transition official unleashing, with 6 mayors of the region speaking, and myself saying a few words on behalf of TN. We symbolically cut a plastic ribbon to mark the unleashing. A sit down dinner for 300 and singing and dancing went on into the night. 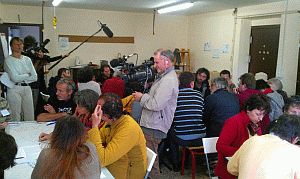 The Transition Clinic in Trieve

Workshops dominated this day. I held a Transition Clinic, creating a world cafe to enable hot topics to be explored. Sixty of us (and four film makers) were working and moving around in a space better suited for twenty. It was a good lesson in how the space in which you are working can create difficulty, and also the cooperation shown in working with difficulty.

In the afternoon I convened a ‘Transition Interior’ workshop. There is an appreciation of this work, particularly amongst those find it familiar territory, that excites and ignites a fire to Transition like no other aspect of what we do. It has to be done well and respectfully; more so then other areas of our work (I humbly include myself in this category). There are, of course, good reasons why many find inner transition difficult territory. This reticence to ‘go there’ speaks of pain, loss, and difficulty, and as in Permaculture the problem is the solution. Inner Permaculture is an area less explored then other areas of a ‘permanent’ or sustainable culture and probably one of our greatest resources. 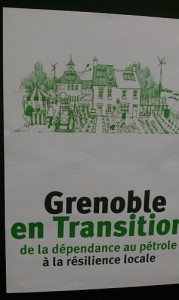 Transition in France has taken off. Two trainings are taking part this month, in Semur and Grenoble. The first official initiative has unleashed. The French hub web site has 35 initiatives listed. The French language edition of the Transition Handbook is doing well.  The signs are good, I wish them bon chance!

Just after Naresh sent me this to post here, I had an email from a friend passing on a comment from a friend of hers in France.  “a wandering story-teller came by with her donkey to the place I used to live in, and told all sorts of stories (really for children), BUT….she started off by waving Rob’s How To Be A Transition Town manual in the air, saying it was her bible and everyone should read it! Tell him she’s talking about it all over the Drome”…

As a regular visit to Paris and having made connections with initiatives there I am very pleased to learn of the the success of this conference. There are a number of reasons why France has been late in taking up transition, some, I believe are related to national identity. These same influences will drive transition forward to be a very succesful movement in France with a very distinct identity. I envy the French in retaining/developing so much of the infrastructure and connections we are trying to recreate – AMAPs and the multitude of local bakeries in each town being two obvious examples.

I shall be watching developments with excitement!

The URL of Negawatt is wrong. Please correct it with this one : http://www.negawatt.org/

Hi Folks, am currently cycling in the Lot Valley, enjoying traditional French culture and its still intact connections with growing things. Am fluent French speaker–would love to help in any capacity to link TT UK and Transition France. Met lady on train to Bordeaux who was reading Silence magazine–on all things Transition. Thanks for the great article about the French conference.

very excitingly a team of people in France, Scotland, & Canada have been translating the two day transiiton training materials into French over the last year or so ,
and now …
on the 18/19 June there will be the first transition training in France held in Semur, and later on the 21/22 another in Grenoble in the south with our two French speaking trainers, Jenny McEwan & Ellen Berman.
to be followed up by the next train the trainer course with Naresh & co facilitator, also to be held in Grenoble, this Autumn
keep checking http://transitionnetwork.org/events/network for up to date details.