« So, what exactly is a Transition enterprise?
Debating Transition on ABC Radio’s ‘Bush Telegraph’ programme »

A day exploring values, policies and practices…. and silly signs…

Yesterday I attended a conference in London organised by the University of Surrey’s RESOLVE (the ESRC Research Group on Lifestyles, Values and Environment) called “Living Sustainably: values, policies, practices”.  But before I tell you more about that, I must show you this wonderfully silly sign I saw on my way to the venue: 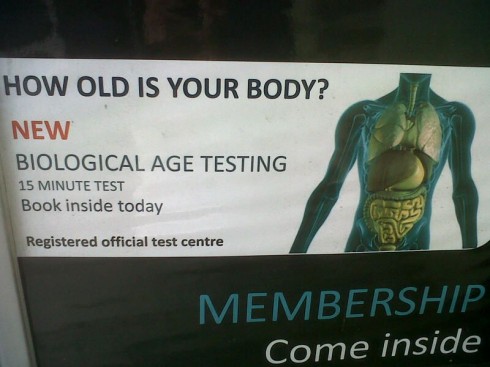 As one respondent put it after I posted the picture on Twitter, “had an idea: ask someone their birth date, calculate how long ago that was, there’s your body age”.  Just saved you 15 minutes (plus a few quid I imagine…).  I love the idea of their being a “registered official test centre”.  Anyway, I digress…

So, RESOLVE is a group of academics and researchers looking at various aspects of the transition to a low carbon society.   The day brought together some of the RESOLVE team to present their research and also to hear from other speakers (one of whom was me).  I arrived late, due to travelling up early from Devon (how I love Newton Abbot at 7am.), so I missed Tim Jackson’s opening address and Juliet Schor, author of ‘The Overworked American’ talking about the role of working hours in the transition to sustainability. 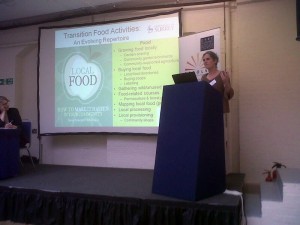 The first session I went to included a talk by Alexia Coke (see right), who is doing a PhD about Transition and food.  Hers was the only talk I actually took any notes on, so here they are… Her focus is on the south of England and on food, acknowledging that food is where most Transition initiatives start.  She referred to an ‘evolving repertoire’ or strategies they are adopting, including growing food locally, buying local food, gathering wild/unused harvests, courses, mapping local food, local processing and local provisioning.

She told the story of the garden share scheme in Totnes and how it began to inspire other groups to do the same thing.  Some groups started their own versions in partnership with other organisations, for example Transition Farnham also drew on a similar scheme their Parish Council had set up, and Hugh Fearnley-Whittingstall visited Totnes, was inspired, set up Landshare, and now some Transition groups, such as Guilford used Landshare to enable them to set up their own version of garden share.  Landshare now has 40,000 members.  She referred to this as “circulation and reinvention” within the Transition movement.

She talked about how the Transition movement has a wide range of mechanisms for sharing and collecting project concepts and experiences, but that equally as useful are the links between initiatives and the support they offer each other.  She noted how Transition is open source, experiemental, non-prescriptive and adapts to local circumstance.  She talked of how the vision of the future is important and how Transition is about creating local food systems, “creating parallel infrastructure”, within a discourse about local food.  It is, she said, “as much about livelihoods as it is about lifestyle” (I liked that bit… I might have it printed on a Tshirt).

Then I went to a session of presentations about “perspectives on governance and change” which I have to say mostly went over my rather tired head and made me very glad that I’m not an academic.  In the final session I spoke about the idea of ‘Transition as cookery’, offering a pretty-much graph and conceptual model-free look at what Transition is doing, what seems to be working and what isn’t.  I think I was the only talk with props (a bottle of Sunshine Ale from Lewes and a horrible jumper from Taunton), and there were some great questions after I had finished.  I was very happy that, given the academic qualifications of many of those attending, I was able to understand all the questions I was asked. 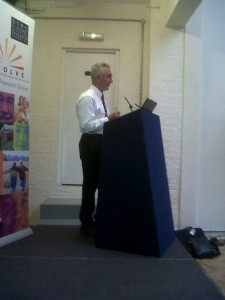 The event was drawn to a close by Tim Jackson (see left).  What’s great about Tim is that he is an academic who is able to speak with passion and poetry, with great eloquence and clarity.  He set out the insights that are emerging from RESOLVE’s work and the importance of making sure they underpin the shifts that society needs to make.  And that was that… I set off back to Paddington station, late because the event overran, got lost, sweaty, missed my train, and got home late.  Anyway, it was good to see some old friends and to meet some new ones, and to be part of this stimulating event.  And I managed to get some time on the train home to sit and work out just how old my body is.  It took me way less than 15 minutes.

These all sound very interesting! Can we find out more on Julia Neuberger’s talk anywhere?

(You do know that the biological age thing is looking at atypical damage often caused by lifestyle choices which reduce your remaining expected years of life e.g. a 20 year old with the remaining life expectancy of a 45 year old, right? 😉

given the number of trips you make to London you should just MOVE here, or start leaving spare clothes, books etc on the train and see if anyone notices.

Great story…keep up the storytelling! It’s good to read/hear the positive statements about Transition. Transition provides a lifeline as many of us worldwide reach out and hang on to new vision and focus that brings with it new language via intelligence. Thanks, Rob.