« Voices from the previews of ‘In Transition 2.0′: Lyttelton
‘Breathing new life into the concept of resilience’: the notes from my ‘Four Thought’ talk » 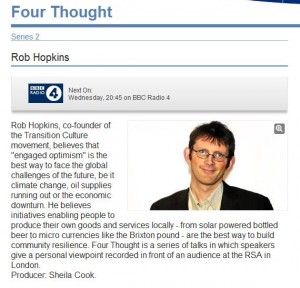 Tonight, on BBC Radio 4 at 8.45pm, you can hear the talk I gave for their ‘Four Thought’ series.  Here’s how the BBC website describes it:

“Rob Hopkins, co-founder of the Transition Culture movement, believes that “engaged optimism” is the best way to face the global challenges of the future, be it climate change, oil supplies running out or the economic downturn. He believes initiatives enabling people to produce their own goods and services locally – from solar powered bottled beer to micro currencies like the Brixton pound – are the best way to build community resilience. Four Thought is a series of talks in which speakers give a personal viewpoint recorded in front of an audience at the RSA in London”.

I hope you enjoy it.  I’ll post the text of it tomorrow…