« ‘The True Meaning of Choice’: a piece for The Guardian’s ‘Comment is Free’ section
Fiona Ward introduces the REconomy Project » 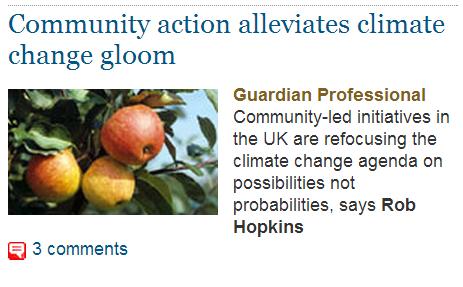 It’s a bottom-up approach to the creation of community resilience; the ability to withstand shocks at the local level. It focuses on “engaged optimism”, a solutions-focused and positive response, rather than the “false cheer” Confino warns against.

There is an important distinction to be made between the kind of positive thinking that Barbara Ehrenreich lambasts in Smile or Die: How Positive Thinking Fooled America and the World, and the Transition approach. Ehrenreich writes of “mandatory optimism and cheerfulness”, whereas Transition is very different. It acknowledges the scale of the challenges we face and that they can be deeply upsetting, but also invites you to be part of a collective response, with no predetermined answers, to help make history figuring it out. A collective experiment, if you like.

It works like this: an initiating group forms; raises awareness about climate change, peak oil and so on (always in the context of what can we, now, here, do about it); then subsequent groups form around key areas – food, energy, transport – which enable the people who are passionate about those areas to get involved. It works to create a collective vision of how it would like its future to be in the context of the challenges outlined above. This then leads to practical projects driven by what people feel enthused to do. You might think of it as a “do-ocracy”, a process driven by the people who are doing stuff.

It is open source, bottom-up and self-organised. It represents a shift from focusing on probabilities to focusing on possibilities. Confino’s despondency following his immersion in the data on climate change is about probabilities, the probability that such-and-such will happen by a certain time. But what if the thinking shifted to what was possible? Given that we are where we are, what might we be able to create in this situation?

It is that refocusing that led to the creation of Bath & West Community Energy, a co-operative, community-owned energy company which just raised £750,000 in its first share launch. It led to the Bristol Pound, launched last month with the full support of the city council and already accepted in many hundreds of businesses, and Transition Lancaster’sFruity Corners, fruit trees planted across the city. . There are many other examples of such initiatives.

While none of these on their own are an adequate response to climate change, combined they represent communities taking visionary leadership when their leaders are failing to do so.

Might we redefine resilience as the degree to which we can breathe possibility into our local communities, changing the stories they tell about themselves, so that when they encounter shock, they are able to refocus on the possibilities that emerge? The realisation that we live in a world of limits can be a great stimulus for new thinking and creativity.

I too have sat in the pit Confino writes about, the gloomy place where it feels like you are the only person who can see the wall our juggernaut of civilisation is heading for at great speed. Indeed, I pop back there on a fairly regular basis. But feeling part of a process, with others, of starting to build the kind of world we want to see, helps hugely. It contributes to my own personal resilience, as well as to the resilience of the community around me.

It is perhaps a path out of the pit driven by action.

Rob Hopkins is co-founder of Transition Network and author of The Transition Companion. He blogs at TransitionCulture.org and tweets as@robintransition.  You can find the original of this piece here.

Thanks, Rob, I needed that.
Best wishes from inside the pit,

Here´s the link for the article:
http://www.guardian.co.uk/sustainable-business/community-projects-refocusing-climate-change-agenda?INTCMP=SRCH

Rob–this is by far the best explanation of what Transition Towns is about. It contains numerous but implicit references to chaos theory: that we have to self-organize, start from the simplest level, from the ground up, that we don’t know the ‘mature state’ of the system or even where we’re going, but that by following simple ‘nearest neighbor’ rules, we can create resilient communities and perhaps arrive at a mature system state that is resilient and more ecologically sound than the current one.

After reading this, my ‘aha’ moment was that I realized that there’s no way we can solve the problem of global climate change—it’s impossible. It’s too big, it’s too complex and too intractable. Since we can’t solve the problem of global climate change (or ‘peak oil’) we have to focus on problems that we can solve. “Focus on possibilities, not probabilities.” We have the capacity to build local, resilient communities that can survive whatever hits us, whether climate change, peak oil, economic collapse, or the decline of an empire. We can solve that problem by working through movements like Transition Towns that ask the right questions and focus on the right issues, even if they don’t have all the answers. “Resilience” doesn’t solve the problem of climate change either—it just helps us to survive it so that we can adapt to whatever conditions will be thrust upon us for the indefinite future. In the face of these insurmountable dilemmas, we cannot avoid collapse, large or small. Catastrophic transformation is on it’s way and we can’t stop it. All we can do is survive it and hope that the new communities we create will evolve into a system that is adapted to the new world that awaits us.

After four years of doctoral studies in environmental sociology, systems theory and chaos, I finally “get it.”

perhaps one reason why actually doing small things that are possible within our own communities helps to lift us out of the pit is that working in a team with others for a manageable and worthwhile end is fun.