To start with, here is a film about an exhibition called As Large as Life which ran recently at the Foundling Museum which featured all of Blake’s work which I am about to discuss in more detail:

The work that touched me the most was called Mothers And Babies Underwater, completed last year.  It is a series of 50 large drawings for the walls of Centre Hospitalier in Angers, France.  Blake describes them thus:

“These were done for a newly-built hospital, and the illustrations are a way of saying ‘it’s going to be alright in a minute’”.

The drawings are celebratory, joyful, showing mother and baby swimming, or possibly flying, relaxed and free, and capturing the first moment they “meet each other at last as individuals”.  Blake refers to them as “a celebration of what’s going to happen and a reassurance that it is going to happen”.

He told a story of being called into a meeting with the Treasurer at the hospital to discuss the project.  He was expecting the Treasurer to tell him that there was no more budget or something, but he was told with enthusiasm that “what matters about this project is the exchange of looks between mother and baby”.  A pretty enlightened Treasurer I’d say, and these pictures capture that moment you first meet your new baby so beautifully… here’s a selection of them: 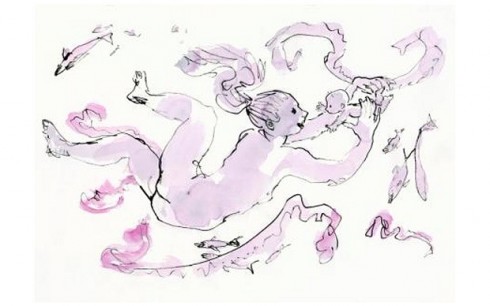 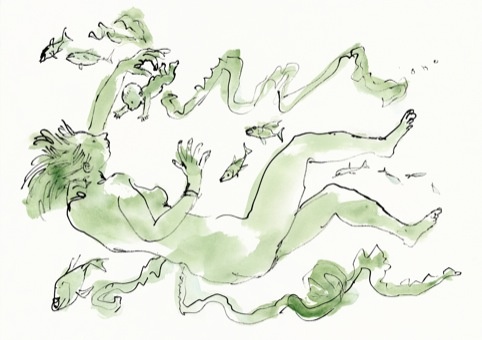 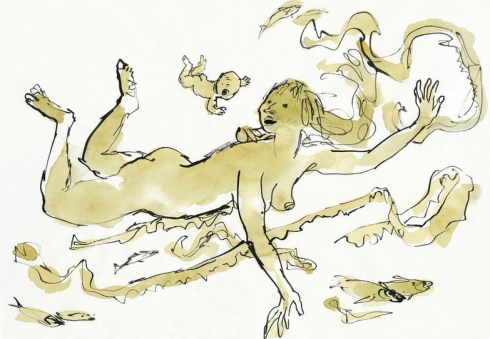 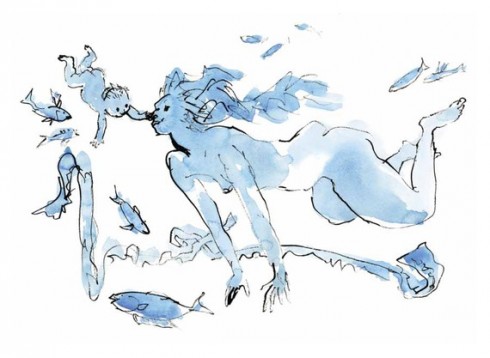 The next series of pieces was called You’re only young twice, and was painted for elderly mental health patients, to adorn the walls of the unit.  For these, Blake uses metaphor rather than being literal.  Here’s how Blake described them in his talk at Hay:

“[This] project was for a residential unit for elderly mental health patients, and I hoped that, as I was of their age group, they would not mind a little mild teasing. So I drew a parallel world, mostly in trees, where they could not only dance and sing and eat, but swing from branch to branch if they felt like it. I think they liked it: at least one patient exclaimed, “They are wonderful. They encourage us to do all the things we are not supposed to.” 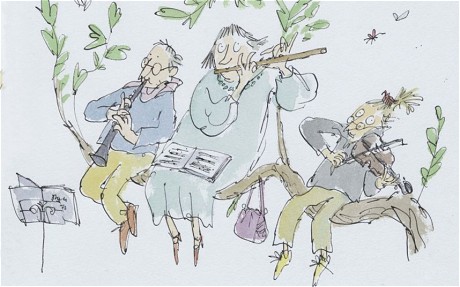 A third series, Planet Zog, begun in 2007, was for a children’s hospital.  Again, it used metaphor, based on the idea that for young people going into hospital, away from home and family, can feel like an alien world, so Blake drew it so that it features a friendly alien planet and aliens and young people cheerfully swapping doctor and patient roles. 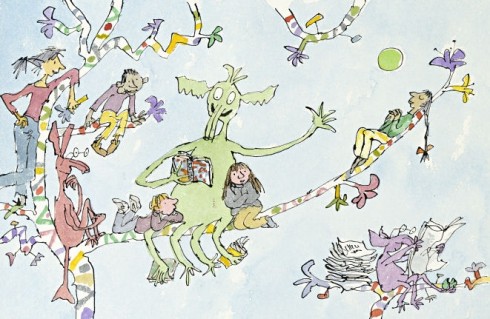 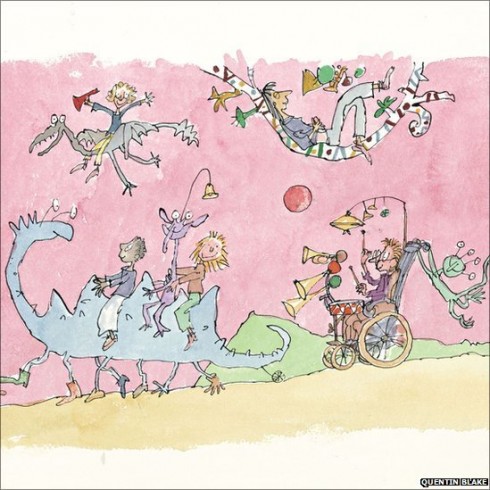 The last series, and perhaps the most extraordinary and thoughtful, was produced for the Vincent Square Eating Disorder Clinic in London which works with adults with eating disorders, described by Blake at Hay as being for people who “needed to be reminded of the comfort of ordinary life”.  Entitled Ordinary Life, they take a different approach, based on lots of discussions Blake had with former sufferers from eating disorders.  They celebrate everyday life in subtle yet familiar ways, identifying the things that give everyone pleasure, with food playing a peripheral role.

Blake says of these drawings:

“Most of these pictures are what I call metaphorical in the sense that they are not real life. But these are for people who I think really want to be relaxed. They are people who are very tense about food, about their own appearances and tense about where they fit into things.  So what I wanted to have was pictures that were fairly relaxed and soft and slightly scruffy. The drawings don’t insist on food but there is food about as part of everyday life. I hope they are optimistic. There is a lot of humour in them but they are not making fun of anyone. They are a form of praise.”

In his lecture at Hay, Blake talked about Paula Brighenti, a former eating disorder patient and artist who said of these drawings:

“When an eating disorder patient withdraws from social contact, feels isolated and unable to trust others, it is enormously beneficial to be reminded of the possibility of a positive interaction with non-judgmental creatures. The association between being offered food and love, accepting food and trust, works to a very profound yet unobtrusive level”.

Here are a couple of them: 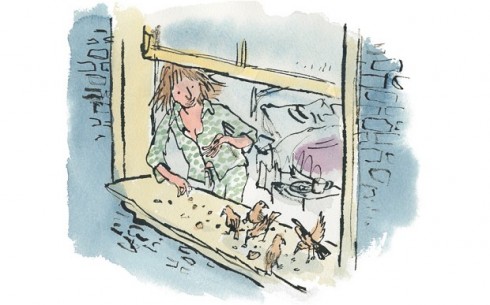 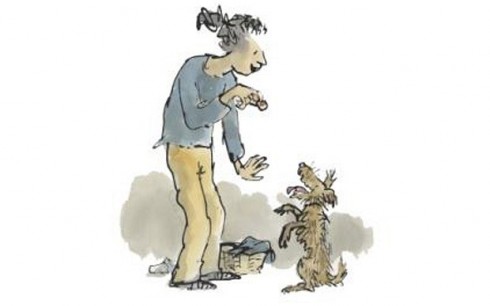 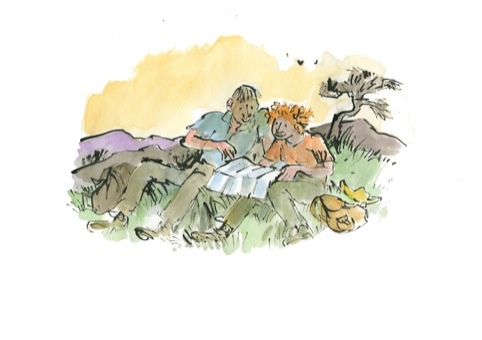 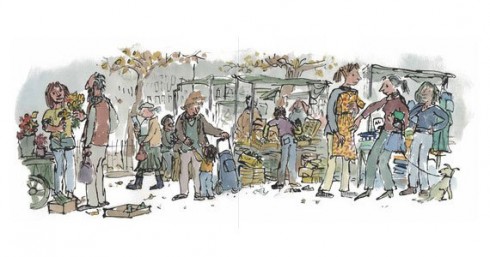 One example is the image below showing a young girl and a young woman trying on dresses together.  Brighenti picked out this image as the one that affected her the most.  She told Blake:

“It is this little girl that stays with me long after I move away from the picture. She talks to the girl I was and who somehow went missing as I was trying to imprison her body. It was her mind and heart that were eluding me. It was her joy I could not hold on to… She shows me that it is not perfection but imagination that nourishes our dreams.” 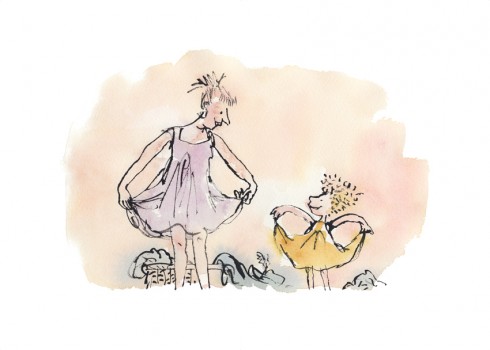 Blake is much praised, and rightly so, for his work’s power to inspire young people to read.  But what struck me from the work he described above, was the power that illustration has to also engender empathy and to support people at a range of depths.  There is such compassion in his work.  I guess from a Transition perspective the ongoing appeal of the front cover drawings on The Transition Handbook perhaps offer us a taste of how illustration can bring an idea and a vision of a different future to life.  I was very moved by Blake’s work, and it really stimulated for me an enquiry as to how illustration can better be used to bring Transition and what it hopes to be moving towards, to life.

I’d like to close with a small taste of perhaps how illustration can work in a Transition context to shift things in unexpected ways.  The Transition Handbook featured the article below, a vision from 2014 of a TV show where celebrities were locked on an allotment in Crouch End and not allowed off until they had learnt to grow vegetables.  The picture was the result of a giggly session in front of the book’s designer’s computer, combining a stock image of a model with one I had taken on some allotments in Bradford-on-Avon a few months before.  Here it is: 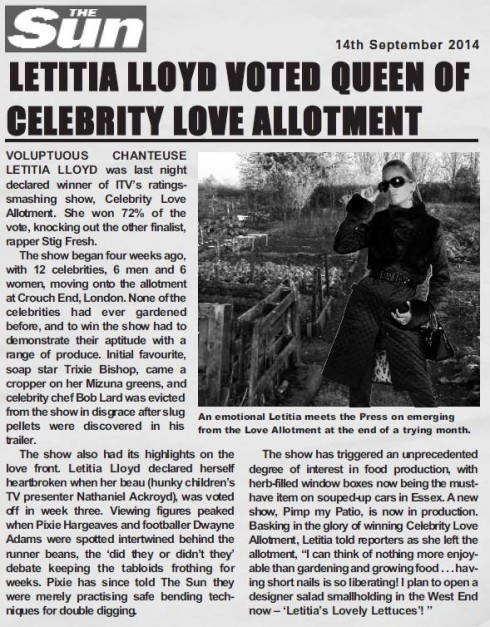 A silly story perhaps, and clearly from an illustration perspective not even worth mentioning in the same sentence as the great man Quentin Blake himself, but roll forward to 2013, a year ahead of schedule, and according to the BBC:

“[TV reality show] Big Brother housemates will have to grow their own food this year, the show’s producers have said.  The 16 contestants will have to cultivate their own potatoes and carrots and season their food with herbs from the garden”.

A thought: how much do films in the RSA Animate series owe to Quentin Blake’s Lester stories, as drawn and told on Jackanory in the late 1970s?

(see http://www.youtube.com/watch?v=mHI7sHB1Lr0 for an example)

Wow James, thanks so much. I have been looking for a clip of him doing Jackanory for years. I watched those as kids and they had a real impression on me. Such a fantastic way of telling a story…

I really LOVED the spoof newspaper stories in the first edition of the Transition Handbook. I’m sure they were a giggle to produce.

Rob, if you ever wanted to create some more, I would love to be involved as I completely agree with you about the power of illustration.

I think spoofs and parodies are incredibly powerful tools. The Sun story above reminds me of Kelli Anderson’s TEDx video where she described spoofing the New York Times with the Yes Men a few years ago: http://on.ted.com/Anderson1 [she starts describing the newspaper about 10 minutes in].

Thanks Chris… I’ll bear that in mind. Thanks!
Rob